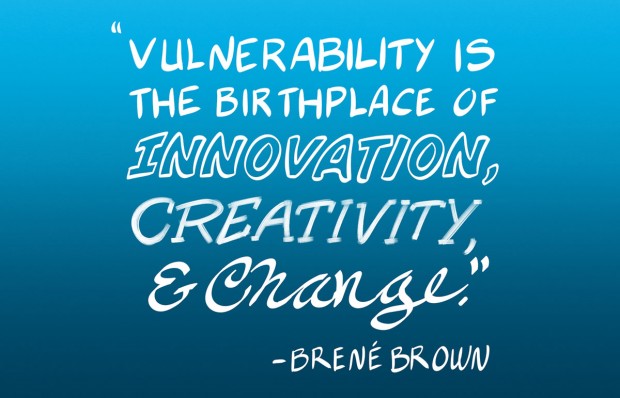 GOOD ENERGY It's not always easy to open up and be vulnerable, but the choice to do so cultivates compassion and connection.

Much to my children’s chagrin, I’ve become something of a podcast junkie. I listen to interviews, and I find them so fascinating and inspirational that I’m often quoting them. So much to learn, so little time, so few people to tell it to (sorry, girls).

The one that’s stuck with me the most in the past few months is a “Good Life Project” interview with Brené Brown, the University of Houston research professor and author of four No. 1 New York Times bestsellers, including her latest, Dare to Lead. In the interview, she said, “I have no intake at all of any criticism or feedback from anyone who’s not in the arena. It’s easy to make a life and a career of sitting in the bleachers and … putting people down.”

Little did I know driving down I-10 listening to Brené that synchronicity was at play. Within days of hearing the interview, still thinking about Brené’s words, I got anonymous hate mail.

It came typed, in a hand-addressed envelope, to the Buzz offices. Mean-spirited, angry – constructive it was not. On a much smaller scale, it was exactly what Brené said she’d tuned out as nameless people behind screens criticized her and her work.

To be clear, feedback from readers is essential to The Buzz, even when it’s negative. We want to hear your thoughts, good, bad and ugly. It keeps us connected, and it makes us better.

But this letter wasn’t the kind that makes anything better. It was personal. It accused me of points of view that were the exact opposite of who I try to be. Editors at The Buzz actually held it for several days before reading it to me over the phone, after which the first words I could get out were, “Someone really hates me.” I doubted myself and felt badly about having offended someone. I spiraled into worry.

Then I remembered the Brené Brown interview. By the way, her TED Talk “The Power of Vulnerability” had over 30 million views. She knows about being vulnerable.

I listened to the podcast again. And I took in, on a much more personal level, what she was saying: If you don’t have the courage to sign your name – if you wouldn’t say something face-to-face to a person – don’t say it. And I realized I needed to let it go.

With that experience in mind, as we begin a new year, I am thinking a lot about disagreeing civilly and learning from our differing opinions. It happens when we open our minds and hearts and listen to each other, and when we remember that we are all connected. And that by supporting each other we make ourselves, everyone around us and the world better. Can we try bringing compassion, rather than anger, to the world?

According to Shawn Achor, a Harvard psychology professor, author and happiness researcher, we are hard-wired to scan for the negative. Our day might be 90 percent positive. But if one thing goes wrong – an anonymous letter in the mail, say – that absorbs our focus. If we let ourselves hang on to the negative experiences, they become toxic. Let them go.

For sure there are big things – bad things – that we need to worry about and be upset about. But in the day to day, opportunities abound to bring our A-games and focus on what’s good. To be “responsible for the energy we put into the room” (again, paraphrasing Brené). To respond, rather than react.

As for the letter, now knowing who likely sent it makes me feel both better and worse. But in the end that doesn’t really matter. Because there will always be naysayers. I’m just going to try my limited best to cancel them out, in my own small world, by bringing the energy to the room that I want to feel, and that I want my children to feel. Because even when we don’t think anyone is watching, our children – our grandchildren – see it all and are picking it up. Ready to bring it all back around in another generation, for better or worse.

On a personal note: If you don’t like something I’ve written, please let me know – and sign your name! Let’s connect, constructively. Because in the end, we are all in this together. Happy New Year.

In April 2008, Harvard professor Shawn Achor contributed a Buzz article C’mon Get Happy all about positive psychology and research on happiness.