Live Music in Houston This January 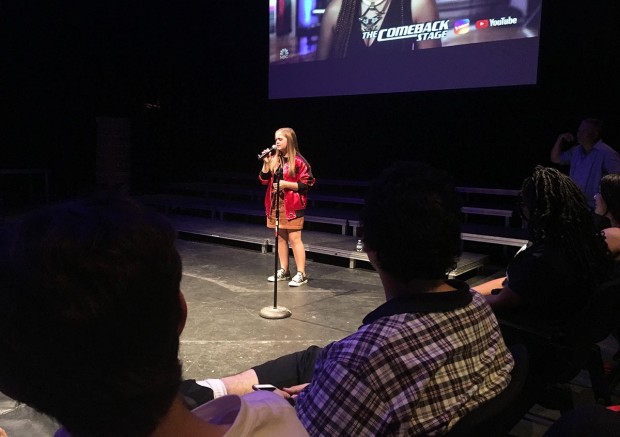 Sarah Grace donned her “Team Kelly” red jacket at HSPVA’s watch party of the premiere of The Voice.

The last thing you may have on your mind this time of year is live music, but fortunately for us, there are lots of great musicians coming into town this month. If school hasn’t started back up yet for your or your family, take your relatives to a show. Or celebrate the new year with a night out!

Jan. 11: Danity Kane @ House of Blues
Throwback! Danity Kane brought us “Damaged” back in their prime (2008),but is apparently still touring?! Catch them in a smaller setting (House of Blues) soon.

Jan. 11, 12, 12: Totally ’80s: Houston Symphony @ Jones Hall
This January, the Symphony is presenting their show titled “Totally ‘80s,” which features music from the coolest decade, including songs from Elton John, Phil Collins, and the music from the movie E.T.

Jan. 12: Breathe Carolina @ Stereo Live
Breathe Carolina is an electronic duo who brought us the hit Blackout back in 2011. Tickets are cheap and there’s only a few left, so if you’re interested, act fast.

Jan. 18: Joe Ely @ The Heights Theater
As my usual readers know, Joe Ely is a favorite of mine. He’s a bluesy/folksy rocker from Texas who puts on great small shows around the state.

Jan. 22: Justin Timberlake @ Toyota Center
Justin Timberlake, who performed at the Super Bowl in 2018, is now touring around the country, performing hits from his extensive career.

Jan. 24: Los Lonely Boys and Los Lobos @ Revention Music Center
Los Lonely Boys are a Tejano rock group from San Antonio. They play Houston fairly often and have been around for a while. Hits you may know: “Heaven,” “More than Love.”

Jan. 25: Ruston Kelly @ The Bronze Peacock at House of Blues
Ruston Kelly (or perhaps better known as Kacey Musgraves’ husband) is a country(ish) musician who has written songs for many popular musicians including TIm McGraw and Josh Abbott Band.

Jan. 26: Brian Pounds @ Anderson Fair
One of my law school classmates is performing this month at Anderson Fair! He was featured on The Voice (Blake Shelton’s team, if you’re wondering) and continues to perform around Texas.