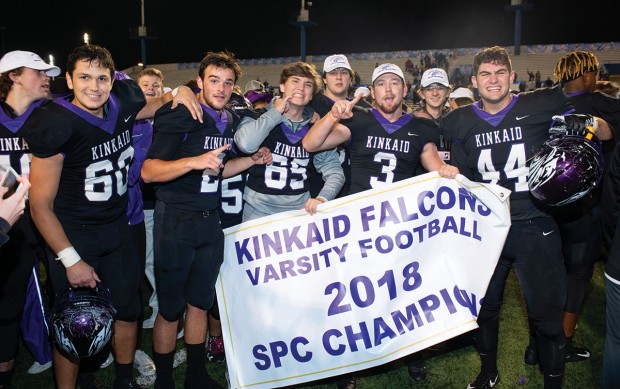 For the fourth time in the last six seasons, The Kinkaid School Falcons are SPC football champions, winning this year’s title with a 41-21 victory over the rival Episcopal Knights.

“This one is definitely special,” said Falcons head coach Nathan Larned. “Going into the game, we were without some key offensive starters due to injury, then lost a couple of more starters in the first quarter for the rest of the game. A lot of young guys stepped up to get this victory.”

Stepping up in heroic fashion was freshman defensive back Jordan Williams. The younger brother of Falcons standout running back Josh Williams, who himself was sidelined with a knee injury, the younger Williams was pressed into the role of running back for the first time. Williams responded with a magnificent game, rushing for 200 yards while also taking a screen pass for a 65-yard score. Defensively, he sealed the Kinkaid victory with a 95-yard interception return for a touchdown. “Jordan’s a special talent. He’ll definitely be seeing the ball quite a bit over the next three years,” said Larned.

The Knights’ victory was also highlighted by outstanding performances from quarterback Zach Daniel and junior wide receiver Victor Garza. Daniel threw for 255 yards and five touchdowns, with three of those touchdown passes going to Garza. As for Garza, along with his three touchdown receptions, he also played a huge role on defense and special teams in the championship victory.

Off the field, there was a big post-season honor for Kinkaid’s Ameer Mustafa, who was named the Lineman of the Year at the Touchdown Club of Houston’s Private School Football Awards Dinner.  “Honestly, this award is more than I could’ve ever imagined,” said the Falcons senior. 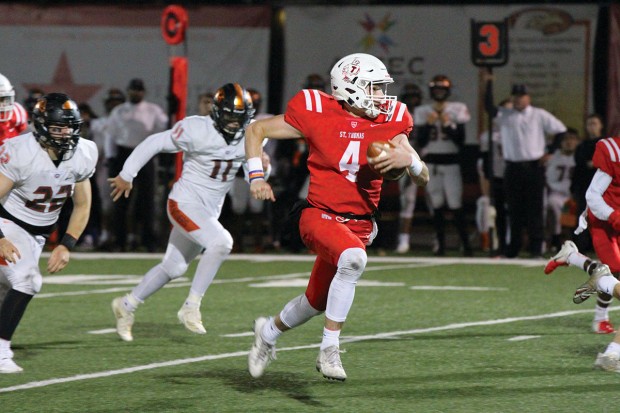 PLAYER OF THE YEAR In the wake of a phenomenal senior season, St. Thomas Eagles quarterback Peyton Matocha received the Private School Offensive Player of the Year Award from the Touchdown Club of Houston. Matocha shared the honor with St. Pius X quarterback standout Grant Gunnell.

The Offensive Player of the Year award went to both St. Thomas quarterback Peyton Matocha and St. Pius X quarterback Grant Gunnell. Earlier in the season, Gunnell broke the state’s all-time record for career passing yards and touchdowns, while Matocha accounted for 4,400 yards of offense and 49 touchdowns in a sensational senior season. “It’s very special. Going into the off-season, I had one goal in mind, which was to get better and make my teammates better,” said Matocha. “To be here and win this award just shows that all the hard work paid off.”

On the other side of the ball, Episcopal Knights senior Jordan Wells was named the Defensive Player of the Year. “There’s just so many great athletes out there, so to win this award is just such an honor,” said Wells. The Coach of the Year award went to Second Baptist Eagles head coach Terry Pirtle, who guided his Eagles to a district title and an overall 11-2 record. 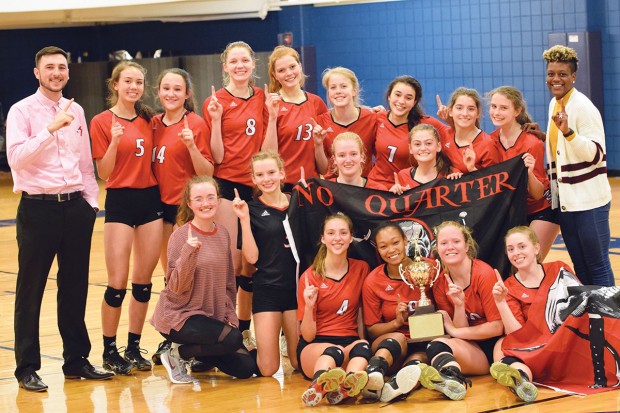 In volleyball, the St. John’s Mavericks captured the SPC Championship with a four-set victory over Episcopal in the tournament’s championship final. The victory marked the Mavericks’ first SPC title since 2009. “We were predicted to finish near the bottom of our conference, but our girls didn’t care what others were saying,” said Mavericks first-year head coach Shelbi Irvin. “They just responded time and time again and did whatever it takes to win.” For the season, the Mavericks posted a 27-11 record, including a perfect 9-0 mark in SPC play.

Over the course of the season, the Mavericks posted a series of breakthrough victories, including victories over Episcopal and John Cooper for the first time in six years, along with its first victory over Houston Christian in eight years. “We won in a lot of different ways,” said Irvin. “Our girls just had a refuse-to-lose attitude.”

Mavericks senior setter Alexandra Lewis led the SPC in assists with 871 assists on the season. Junior outside hitter Celia Adams was the conference’s kills leader, while sophomore libero Nova Manning was fourth in the SPC in digs. The trio were also named to the SPC All-Tournament Team.

Back in football, Stratford Spartans senior defensive lineman Sam Habel was named the Greater Houston Scholar Athlete of the Year by the Touchdown Club of Houston. Habel, who’s ranked No. 1 in his senior class, beat out 26 other finalists for the award. “I was shocked when they announced my name as the winner,” said Habel. “The resumes for all the finalists were pretty amazing.”

The award is based on academics, athletics and citizenship, with Habel becoming the fifth Stratford Spartan to win the prestigious award since the event was started in 1999.