Lady Vikings: Champions On and Off the Court 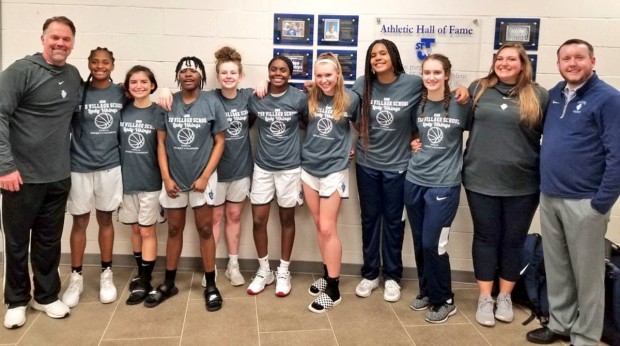 With only nine players on the team roster, instead of the typical twelve, many were skeptical about the capabilities of The Village School varsity girls’ basketball team this year. However, as the season wraps up, the team has been better than ever, exceeding community expectations and breaking records.

“I’m very excited for our players, their families, the entire program, and most importantly, the entire Village School community,” Assistant Athletic Director and Varsity Girls Basketball Head Coach Doug Brotherton said. “I think for us, it’s been a long road in trying to build a girls’ basketball program here, and winning games like the District Championship and the Regional Championship gives us an opportunity to put The Village School on a platform [which]... will showcase how wonderful the young people here.”

In addition to claiming the prestigious district and regional title, the team has also broken other program records, including the most wins in a season with a record of 36-4. The team is also ranked No.1  in the city among private schools and No. 2 in the state.

“We owe our success to trusting the process that our coaches have laid out for us,” co-captain and senior Kennedy Donovan said. “No matter who we're playing or how many games we've won, we approach every single game as an opportunity to get better and perfect something so that when the time comes, we're ready to play at our highest potential. Our team chemistry is phenomenal, especially considering how many girls are new to the program this year, and I couldn't be more grateful to spend my senior year playing with a group like this.”

Not only does the team value success on the court, but performance off the court is just as important.

The players feel they owe their success to the coaches that have helped them train so hard during the season.

“All of our coaches have such a huge part in our success, words can't do it justice,” Donovan said. “They come in early so we can shoot before school, leave late so we can get in some extra free throws after practice, spend hours watching film and making sure that we're prepared - they do everything they possibly can to prepare us for each and every game, and we don't take that for granted. There are very few teams that have coaches that are as great as ours, and we wouldn't be where we are without them.”

“We’re really excited about the opportunity to compete at State,” Brotherton said. “I think that’s something that any player, any team, and any program would dream about - the opportunity of maybe winning the State Championship - but I think the important thing for us is that we are process based in what we do and not results based. So, we are going to go there and control everything that we can control, and then accept the results as they are and be very prideful about the job that we did in giving ourselves the opportunity.”

Aside from winning games, the team focused on building a strong foundation for the program.

“Having a record like ours is incredible [and] being regional champions is amazing too, but what I'm most proud of is the way that we've bought into our culture and our process: that is the foundation of our success,” Donovan said. “We have a saying in the program that ‘we don't have goals, we have standards’ and I feel that we've truly embodied that this year. Our motto is ‘Be Uncommon’ which means that we do all the things that other teams don't to be successful. We approach every practice with the mindset that we get to be there and work hard, not that we have to.