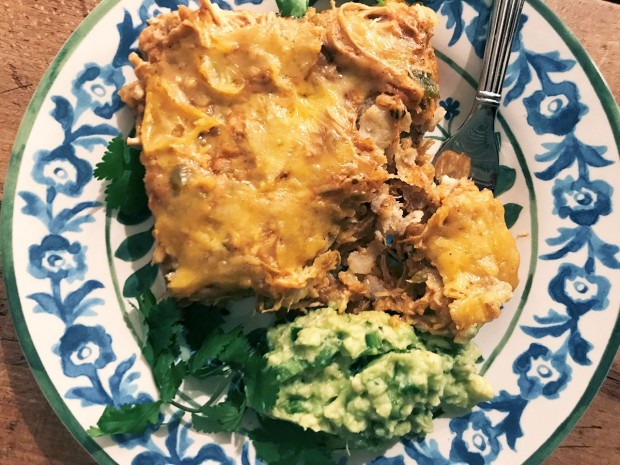 This Enchilada Chicken recipe is a comforting and delicious, family-friendly meal.

Everyone has the recipe. The one that your children request every time they get to request what’s for dinner. This is ours.

I started making this in 2002, when my oldest daughter was two and my youngest was just a dream. Maybe that nostalgia is why my older daughter never fails to ask for Mexican Chicken when it’s her turn to come up with a menu. Or maybe it’s because Mexican Chicken is cheesy (but not overly so) and spicy (but not too) and tastes like an enchilada (without all the messy rolling of the enchiladas, so you can make it at home a lot more).

No kidding, this chicken is good. It’s my go-to when I’m bringing dinner to a family, because who doesn’t love tortillas and cheesy, saucy shredded chicken? Then, invariably, someone will ask for the recipe, and it’ll quickly become their own go-to. It’s as easy to serve to a bunch of kids who’ve dropped in for dinner as it is to grown-up friends, because, again – cheesy, saucy shredded chicken.

The recipe, originally from Cooking Light, has taken a lot of twists and turns over the years, but here’s where I’ve landed with it. What I consider to be the perfect balance of cheese to sauce to chicken to tortillas. Just what you want in an enchilada. On a much simpler scale. Request away.

Enchilada Chicken (make this first to use in the Mexican Chicken)

Recipe directions:
Put everything in a pot or deep skillet and bring to a boil. Reduce heat and simmer on low for about 2 hours, or until the chicken is very tender. Remove the chicken breasts to a plate to cool. Shred with two forks or your hands.

Recipe directions:
Preheat oven to 350. In the same pot or skillet as the Enchilada Chicken (you will have onions, peppers and broth, but you will have removed the chicken), add the Monterrey Jack cheese, the cream cheese, and the enchilada sauce. Stir until the cheeses are melted and everything is mixed well. Add the shredded Enchilada Chicken and stir until it’s well coated with the sauce.

Spray a baking dish with Pam. Layer 4 tortillas in the bottom, then spoon 1/3 chicken mixture over. Repeat layers twice, ending with chicken mixture. Sprinkle with cheddar cheese and bake for 30 minutes until the top bubbles. Let stand for 10 minutes before serving.

Houston Grand Opera Presents 'My Favorite Things: Songs from The Sounds of Music'