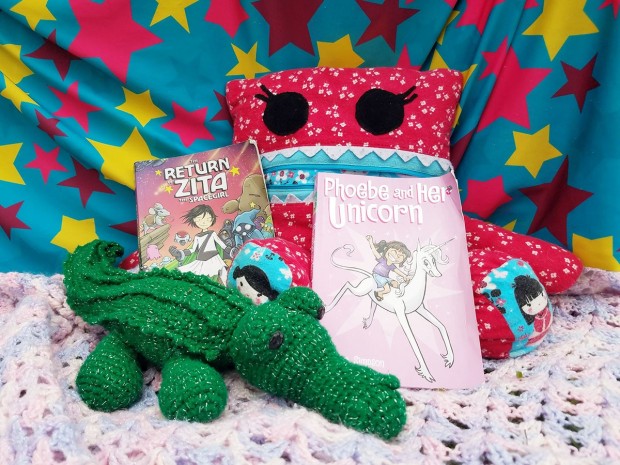 When my daughter was an emerging reader, we often read comic books together at bedtime. She would choose which characters she wanted to “play,” and I took the rest. As a result, she was able to better understand elements of plot and character motivation, tackle complex vocabulary with bravery and became confident in reading aloud.

DC Comic’s Tiny Titans by Art Baltazar and Franco Aureliani: We read both the separate issues and the collections (the plus being that the books themselves are small). The elementary school-aged Teen Titans face many silly situations, complete with bad puns. There are also many inside jokes for a parent familiar with the DC Universe. My daughter always wanted to be Starfire and sometimes Raven.

Benny and Penny by Geoffrey Hayes: Benny and his pesky little sister are mice who get into a variety of scrapes and squabbles. Specifically written for emerging readers, this series appeals to all audiences thanks to the beautiful artwork and strong storytelling. She always read Penny as an adorable toddler, while my Benny was husky-voiced and bossy.

Zita the Spacegirl by Ben Hatke: This series was the ultimate go-to for us. Zita is a young girl with no special superpowers beyond an ability to make friends, stand up for what she thinks is right, and push herself to be courageous in dire circumstances. Pulled into a distant galaxy, she has to save not only her best friend but a good portion of the universe too. The characters have a Henson-like quality that suggest characterizations - the overblown heroic baritone of Heavily Armored Battle Orb One; the deep, slow cadence of Strong Strong; the insecure tremolos of Robot Randy; the endearing squeaks of Mouse.

Altogether, we combined our vocal acrobatics with these treasures, creating a movie in our heads that rivaled any blockbuster.

She’s in middle school now. I sometimes gaze at her wistfully as she reads and creates the theatre by herself. I find myself hearing the echoes of those snuggly bedtimes: