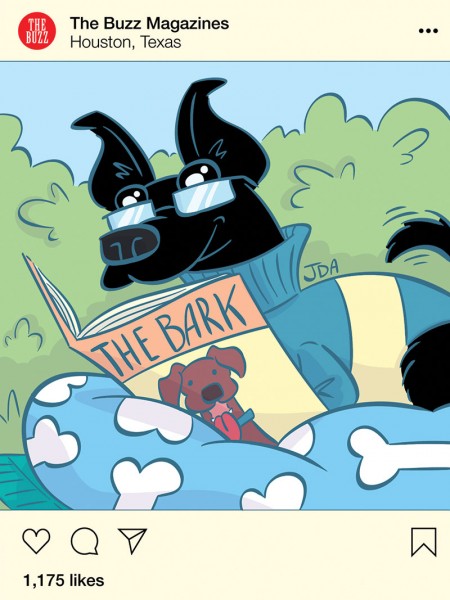 A HAPPY FEED There are entertaining Instagram accounts for every type. What are your favorites? (Illustration: behance.net/runamokstudios)

We all need a little frivolity in our lives. And many of us have found our fix right on the screens of our phones, on Instagram.

With all the clashes in the world, Instagram has blossomed into something just plain fun, a hub for clever quotes, design inspiration, recipe ideas and artful photos of beautiful things. Unlike Twitter and Facebook, all Instagram posts are photo-based. There are captions, but the focus stays on the images posted.

To start spring with a little creativity and color, we polled some readers for their suggestions of Instagram accounts to follow. Here’s to happy scrolling!

For design inspiration, Tracy Kapiloff (who at home favors a tailored, neutral aesthetic) likes dreamywhiteslifestyle, eye-candy for anyone partial to vintage French farmhouse style. And photographer Kitty Rabinow sends us to alexander.hoyle, who was trained at the Royal Botanic Gardens and posts “fabulous English gardens and flowers.” Locally, both thompsonhanson and moss_landscaping post garden-goal photos from neighborhood homes. For a rainbow of florals and pretty nature shots, floretflower delivers.

Wendy Gold’s favorite accounts to follow are amalficoast_italy, for glorious Italian coast photos as well as travel information and offers; eatingnewyork, for drool-worthy food photos from restaurants across the city; and abrahamhickspublications, which shares quotes about the law of attraction, or the belief that positive thinking brings positive experiences and vice versa. The mother of three also follows #ellenshow, which is not an Instagram account in itself, but amalgamates all the videos posted to Instagram that have been hashtagged #ellenshow (a hashtag is the number or pound sign), referring to The Ellen DeGeneres Show (which also has its own account, theellenshow). You can expect the posts to be pretty hilarious.

Cute animals abound on Instagram. Jordana Roteman says she and her 20-something daughter Eden “are obsessed” with thedogist, an account with 3.4 million followers. “Pictures of cute pups galore!” is how the former graphic designer describes thedogist. The teenaged set goes crazy over samsonthedood, an account dedicated to an adorable Goldendoodle named Samson who gets dressed up in fuzzy slippers, sunglasses and scarves, and ski clothes for his Instagram photo shoots. Chinnybuddy documents the almost-human world of Mr. Bagel the Chinchilla, all while promoting animal adoption and discouraging people from wearing fur.

For laughs, Jackie McGreevy, a mom of four, suggests texashumor for wit that reads like an inside joke for Texans. She says her three boys love barstoolsports and to keep up with viral pop-culture happenings of the day, which are generally good for a laugh – or at least a “wow.” Jackie also says she giggles reading mommyneedstolaugh, an irreverent account that self-describes as “laughing, swearing, enjoying the moments, and desperately trying not to lose my sh--.” Posts include quips like, “Having kids is like continually cleaning up after a huge party that you didn’t attend.”

Hollywood power couple Blake Lively and Ryan Reynolds each have their own Instagram accounts, and following both is fun – with an inside view into how they engage with one another. They’re constantly commenting on and poking fun at each other’s posts.

Velvetcoke comes recommended by a local artist; she found the account via her college-aged children. “It’s historical photos, generally of stars and royalty, and the back stories to accompany the photos,” she says. “Very cool.”

There are many local artists and galleries to check out, among them kathryn_rabinow, who posts intriguing photographic images from faraway travels as well as neighborhood walks, meredithknoxbarineau.art, a watercolorist posting her latest abstracts, and fotorelevance, a contemporary-photography gallery’s thought-provoking posts. Stuart Rosenberg sends us to chris.jln for his “super-cool architectural images, many captured in Houston.” Stuart also likes infphy, “a Houston photographer with awesome hyper-stylized shots.”

More ideas: abeautifulmess for DIY inspiration and colorful ideas, beautifuldestinations to temporarily cure – or fuel – wanderlust, and natgeo for National Geographic’s incredible images from around the globe.

And on we go, deep into the Instagram recesses. Join us.