From backyard to national TV 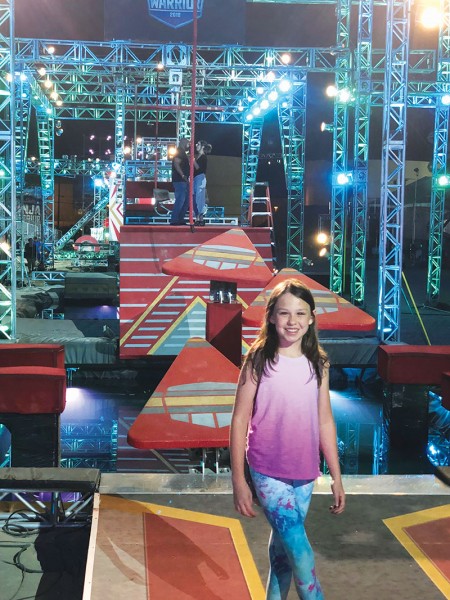 Madelyn Madaras, an energetic 11 year old with deep dimples and long brown hair, arrives home after a day at Memorial Middle School. She shares the ranch-style house with older sister Emily and mom Karen. Madelyn sets her backpack down and heads out the back door for her daily after-school ninja training.

In her backyard lies a labyrinth of obstacles – her very own ninja gym, built by her mother Karen and trainer Sam Sann. The obstacle course is Madelyn’s happy place, where she has conquered fears, sustained injuries, overcome struggles and built confidence.

Madelyn has been a fan of the NBC show American Ninja Warrior for years, a passion eventually leading to her backyard ninja gym. After producers announced they were adding a “Junior” show for kids ages 9-14, Madelyn decided to go to the next level, train even harder and enter for a chance to compete. Houston-based trainer Sam Sann – who survived forced labor as a child in Cambodia and, as an adult, has thrived as a trainer for many competitors on the Ninja Warrior show – set up a training plan for Madelyn.

Madelyn created a submission video and sent it off. It’s hard not to smile while watching her charismatic personality bloom on camera. In the video, she walks through her backyard course as she talks about her love of reading, a trip she took to Europe, and science – she wants to be a neurosurgeon. She also talks about her personal struggles with the autoimmune disorder called Sjögren’s. “It’s an autoimmune disease that makes my joints really, really hurt. This affects my ninja training a lot. I decided to try eating healthy food, and it really helped,” she says. The show’s producers invited her on the show.

Madelyn doesn’t come from a particularly intense sports background. Her mother was a ballet dancer and encouraged her girls to play sports, and Madelyn played soccer as a young child, but no sport ever stuck. Once she started practicing over the obstacle courses, however, it was all she wanted to do. “She does not quit until she gets it down,” said Karen.

Karen and Sam started the outdoor gym by building a few obstacles in Karen’s garage. It quickly expanded to the backyard, and as Madelyn mastered the obstacles, they added more challenging ones. Soon, other ninja trainees came over to the Madaras home to use the course. (Karen and Sam have since partnered up to open a ninja-training gym called Sam Sann Warriors – All Star Ninjas in Spring Branch, where Madelyn and other athletes practice, in addition to her backyard).

The backyard gym has, among other obstacles, a warped wall, salmon ladder, peg board, laches, sonic step, ring swing, cannon ball, cliff hanger and tic tock. The structures cover almost every square inch of the yard. There, Madelyn rigorously trained for a year and a half, along with her 14-year-old sister Emily, who also loves to tackle the obstacles.

Madelyn makes what looks impossible easy. “Madelyn is exceptional,” said Sam. “She will continue to work on mastering an obstacle until she gets it.”

Her favorite obstacles are anything with laches, where she swings back-and-forth hanging onto the obstacle to build momentum and let go and grab onto the next object. “I love building my swing with strong kicks, and when I let go, I love the sensation that I am flying through the air, and focusing on the next object,” said Madelyn. 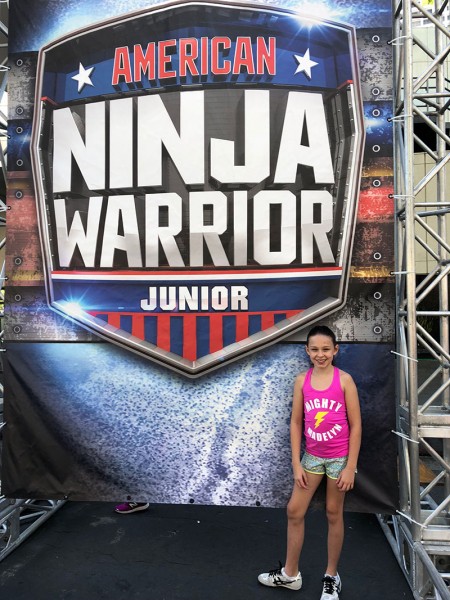 Madelyn’s hands have dry and cracked calluses all over the inside of her palms. “I cannot put any lotion on them because it would affect my grip,” she said, folding them outward to show off.

In July, she was flown out to California with her mom and sister to compete on American Ninja Warrior Junior. At the taping, dozens of boys and girls from across the country tackled the TV show’s course at Universal Studios.

Madelyn, who went by “Mighty Madelyn,” faced off on course against a boy her age. She had to conquer her nerves in front of lights, cameras and what would be a national audience. Her episode (Episode 10) aired in December. She had a strong run, and although the boy hit the buzzer first, Madelyn says she accomplished a dream by competing.

She still trains daily and hopes for another chance at that American Ninja Warrior course. Until then, you can find her in the backyard.

For more on Buzz-area competitors, check out “Ninja Warriors: Running down life’s obstacles." 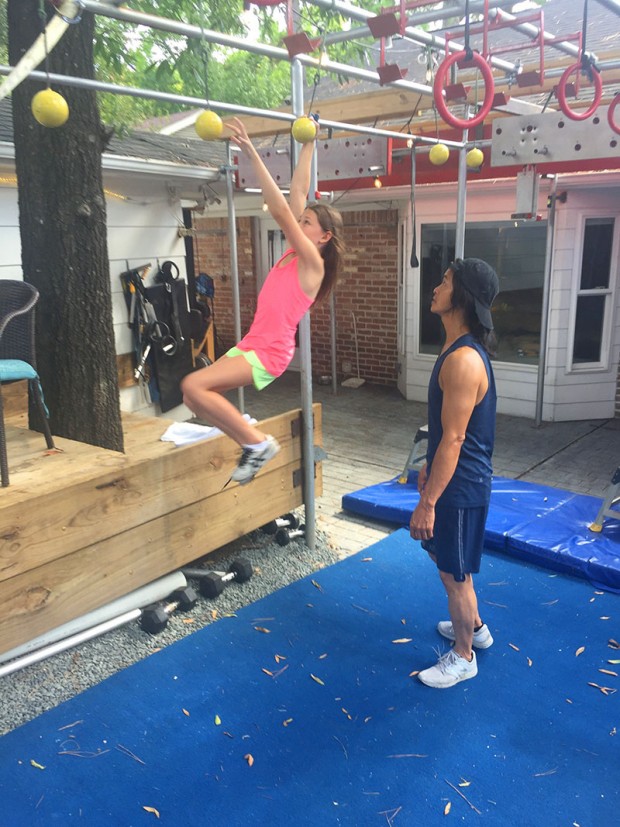 BACKYARD GOALS Mother-of-two Karen Madaras had a ninja training course built in her family’s backyard to give her daughter Madelyn, 11 (pictured, with ninja trainer Sam Sann) a place to practice her ninja skills.

8:30 am to 10:30 am
Location:
Evelyn's Park Conservancy
END_OF_DOCUMENT_TOKEN_TO_BE_REPLACED