March into History with these Ladies 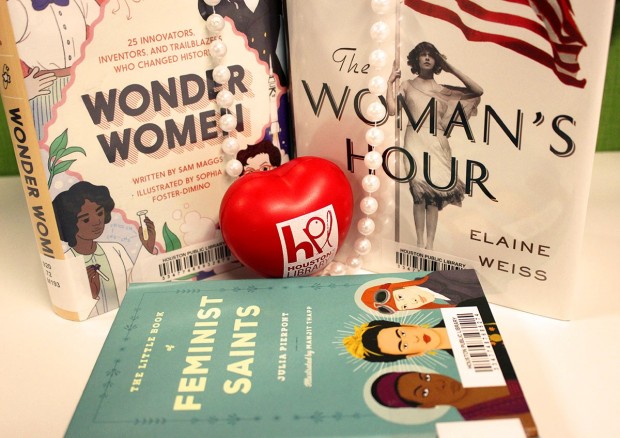 Welcome to March aka Women’s History Month! Women’s History Month is celebrated annually worldwide as a way to acknowledge the role of women and their (sometimes overlooked or unsung) contributions to history and modern society - although it should be noted that there’s never a wrong month to celebrate the role of women in history and their positive impact on the world.

March’s designation as Women’s History Month traces its roots from the celebration of March 8, 1911 as the first official International Women’s Day in which delegates from all over the world demonstrated in favor of the right to vote, hold public office and be protected from discrimination. In 1980, the week of March 8th was declared Women’s History Week by President Jimmy Carter. Libraries, schools and community organizations were encouraged to reflect on the efforts of such trailblazers as Harriet Tubman, Susan B. Anthony and Sojourner Truth. In 1987, the celebration was further expanded into Women’s History Month. So, check out one of these titles and reflect on how far we have come - and how far we have to go as a society.

The Little Book of Feminist Saints by Julia Pierpont: This eclectic and gorgeously illustrated book honors a 100 women in various fields as “secular saints,” champions of progress and sources of inspiration for men and women of all ages. Subjects include scientist and environmentalist Rachel Carson as Matron Saint of Future Generations and artist Frida Kahlo as Matron Saint of Color. Each entry contains a short anecdote about the subject to encourage reflection, spark further interest or encourage sharing with others. While a bit too focused on figures from the 20th Century and the Western world, this is a wonderful starter title whether it be for a student looking for a subject for a Women’s History project or someone looking for a new “shero” to emulate.

Wonder Women: 25 Innovators, Inventors and Trailblazers Who Changed History by Sam Maggs: Another wonderful starter title full of awesome ladies to learn from, this funny and engaging book highlights woman who broke barriers as scientists, engineers, mathematicians, aviators and the generally brave and brainy. Examples include Huang Daopo whose weaving technology revolutionized the textile industry in China five centuries before anyone heard of Eli Whitney’s cotton gin and Susan La Flesche Picotte, the first Native American woman to earn a medical degree and a tireless campaigner for Native public health and legal rights. The book also features an extensive bibliography, a guide to women-centric science and technology organizations and interviews with current female leaders in the STEM field who reflect on the amazing accomplishments of their foremothers. Get it for the geek in your life!

The woman's hour: the great fight to win the vote by Elaine F. Weiss: This incredibly well-researched, but still highly readable work, recounts the sometimes-contentious battle to make Tennessee the final state to approve the 19th Amendment, which in 1920 granted women the right to vote. Focusing on a few crucial summer weeks, Weiss weaves together the social, political, economic and racial factors that complicated the fight including the compromises, some may say betrayals, by the suffragist movement of African-Americans in their efforts to win over Southern power brokers, male politicians such as Woodrow Wilson who courted the women’s vote for their own agendas, corporate interests who worried about their influence on government being weakened by this new voter bloc (the more things change…) and the press who breathlessly reported on it all. Even with the results a foregone conclusion, the down-to-the-wire vote tally and all the larger than life players involved hold the reader’s attention until the final page.

The Hidden Lives of Tudor Women: A Social History by Elizabeth Norton: Full disclosure, I am a massive Tudor history nerd - as I’ve mentioned in previous columns, there are enough beheadings and court intrigue for any Game of Thrones fan. So, obviously I loved this book. Creatively divided into Shakespeare’s Seven Ages of Man from infancy to old age, this book covers women at every level of society from queen to pauper and how they “enjoyed and sometimes endured” life in Tudor England. Topics include what they wore, ate and did for entertainment to education (for the small minority who were literate), marriage, childbirth (and the many dangers), and employment - in professions ranging from servant, wet nurse, member of a religious order, respectable business owner to...the oldest profession. Warning: Norton does not pull any punches with the less-than-romantic view of ye olden times with discussion of backbreaking work, the threat of sexual violence or the risks for those who defied the status quo be it for their religious beliefs, daring to marry for love or *gasp* having an opinion! Talk too much? How does metal spikes through the tongue sound? Rich or poor for all the women discussed, it’s about survival in a very uncertain and largely male dominated world.

Still not enough? Talk to your friendly librarian! The Houston Public Library recently launched a Book a Librarian service and you can make a one-on-one appointment with library staff to learn about our resources and yes, even have a customized book list of titles to check out created for you!