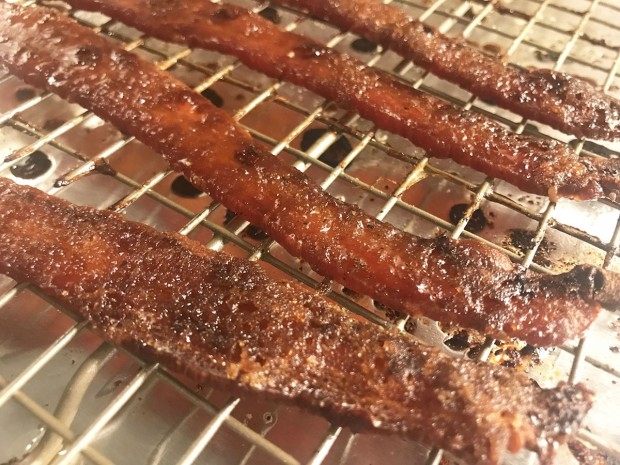 One of my college roommates used to love to mix her pancakes and syrup with her bacon. I used to watch her crunch it all up together at brunch on Sunday mornings, trying for the perfect bite. I wasn’t convinced. But she swore the bacon made the pancakes better, and the syrup made the bacon better, and altogether it was just a better breakfast.

Fast-forward several years, we were having brunch at Elizabeth’s Restaurant in New Orleans. On the menu, just over from the Fried Green Tomatoes and the best Bloody Marys in the city, there was a listing for Praline Bacon. Praline Bacon? It was worth a try.

I’m not sure bacon could be life-changing, but if it could be, this bacon is it. It’s bacon – yum – but just so much better. Crispy, salty, smoky…and now sweet. Like bacon candy. Like my friend’s pancake-syrup-bacon mash-up minus the pancakes (we won’t talk about saving on the carbs, because probably it’s just a wash, but it’s worth it).

Since then, our family has done Praline Bacon a million times. It’s easy – just sprinkle a little sugar and black pepper on top of the slices and cook them until the sugar bubbles up, like a praline crust. There are hundreds of ways to do it with maple syrup, cayenne, chopped pecans, ground-up pecans, butter. We like the plain and simple version here. You’re very welcome.

Preheat the oven to 400 degrees. Line a baking sheet with heavy duty aluminum foil, or double up and use two sheets of regular aluminum foil. Place a wire baking rack on top.

Lay the bacon slices on top of the wire rack, making sure the slices are not touching each other. Bake for 15 minutes, or until the bacon looks like it’s almost cooked but not quite crispy. Sprinkle the slices evenly with the brown sugar and pepper. Return the bacon to the oven to cook for another 8 to 10 minutes or so, until the bacon is browned and the sugar is bubbly. Let the bacon cool; as it cools, it will crisp up. Serve at room temperature.