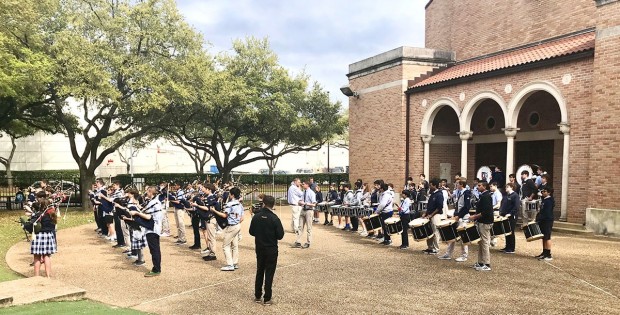 The St. Thomas’ band prepares for performance by practicing with the pipers and drummers in the apron.

St. Thomas’ Sounds of Scotland is an annual event highlighting performances by the school's world-famous pipe and drum band along with its very talented Highland dancers. This year’s performance involves students from fifth grade through high school but also showcases students who have achieved high awards with their talent. Two of the top solo pipers in North America, several champion solo drummers, and several world-ranked Highland dancers will be performing at the event to be held March 22 at the Smart Financial Centre in Sugar Land.

Michelle Tan, a senior at St. Thomas’ Episcopal, is bittersweet about her last year of highland dancing at Sounds of Scotland. Michelle and the other competitive highland dancers have been practicing continuously on Mondays, Wednesdays and on weekends for many months. She has danced at St. Thomas for 13 years and danced at Sounds of Scotland for the past eight years. Michelle enjoys the different aspects of dance at the performance that she doesn’t normally get to experience; performing instead of competing. She will be dancing in: At the Hop, The Reel, Jig, Hornpipe, King of Laois and a solo.

Michelle said, “Dance taught me that determination and hard work lead to success. It has also opened up opportunities for me that I never would have imagined, like traveling to Scotland and Paris.” Michelle can’t wait for Sounds of Scotland and wants it to be the best yet.

Jacob King, a freshman band member at St. Thomas' Episcopal, is more excited than nervous for Sounds of Scotland because of his prior experience in the band. He has been bagpiping for six years. Jacob is practicing staying in time with the pipe major, Filemon Tan, which is the most challenging part about piping. He is especially looking forward to his family coming to watch the many songs that he will be playing in including the Hornpipe. He appreciates the other band members and their hard work and the hard work everyone has been putting into practicing for the performance. Jacob can’t wait for Sounds of Scotland and plans to continue piping for the rest of high school.

Sounds of Scotland will be a unique performance, one night only. Buy tickets online at the Smart Financial website now!