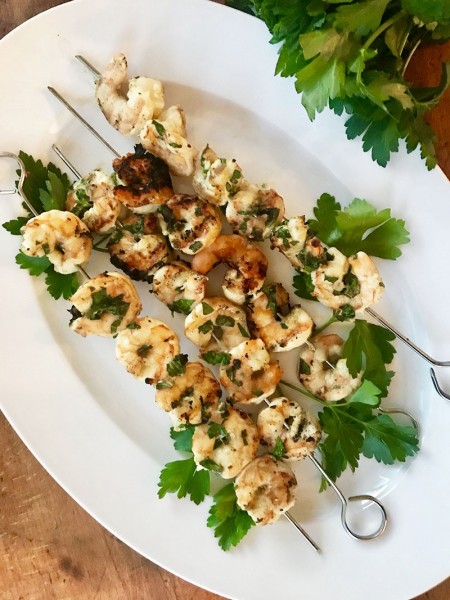 Andria Frankfort says as soon as the weather warms during the spring, this is one of the first dishes she makes. It's easy enough for a weeknight but tastes like it took a lot of work.

Years ago, when The Junior League of Houston was producing its then-new cookbook Peace Meals, I had the lucky job of dispensing recipes to 100 or so home cooks and League members who would test the recipes. That meant I got to go through a list of recipes each week, all submitted for possible inclusion in the cookbook, and choose the ones I wanted to test before passing the rest on. It might have been the most fun volunteer job I’ve ever had.

I would consult with my family, and we would decide which recipes sounded good. Then I’d make them – some were things I never, ever would have made had it not been in the name of recipe testing – and share with my family and neighbors, gathering everyone’s critiques in the process.

Obviously not all of those recipes made it into the cookbook. But that wasn’t necessarily because they were bad. Maybe we had too many fabulous chili recipes, and we had to choose just one. So being a recipe testing coordinator came with a big perk: I got to keep the recipes we liked, even if they didn’t show up in the beautiful new book.

Herb Grilled Shrimp is one of the recipes I saved (which didn’t make it in the book) and have made over and over during the past 10 years. It is a variation of Ina Garten’s recipe in Barefoot Contessa Parties and is easy enough for a weeknight but tastes like you really put in some work. It feels springy to me, so as soon as the weather warms and we are ready to grill, this is one of the first things I’ll make. It’s perfection with a cold margarita.

See our Cooking Buzz column for recipes from The Junior League of Houston.

Combine all the ingredients through the lemon juice in a medium bowl. Add the shrimp and toss to combine. Cover with plastic wrap and refrigerate, allowing the shrimp to marinate for at least one hour.

Prepare a grill and brush the grill rack with olive oil so that the shrimp do not stick. Skewer the shrimp. If you are using metal skewers, spray them with nonstick spray, and if you are using wooden sticks, soak them in water for 20 – 30 minutes prior to grilling. Grill the shrimp for about seven minutes on each side; they will turn pink when done.