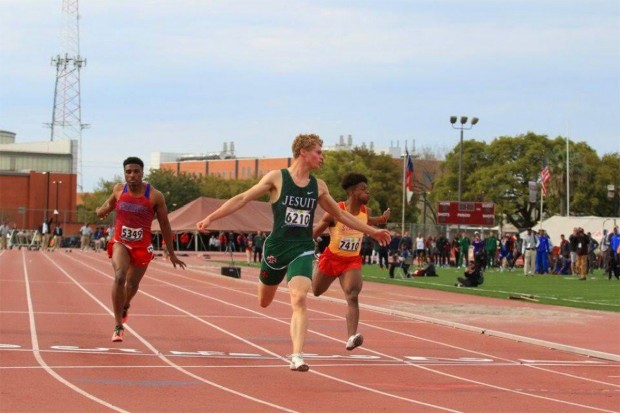 Strake Jesuit senior Matthew Boling recently enjoyed a record-setting day at the Texan Southern Relays. At this track and field event, Matthew ran the 100 meters in 10.22 seconds and the 200 meters in 20.58 seconds, which both stand as the top times in the country.

Before this season, Matthew had never run the 100 meters in high school, but he seemed to prepare well, saying, “I was just trying to focus on driving out strong to set my acceleration phase up at the end. I’ve been really focusing on my speed work and strength towards the end of the race this offseason, so that helped.”

Clearly, Matthew’s preparation worked, as he is currently the fastest man in the U.S. and the fifth fastest in the world. The Houston Chronicle’s High School Athlete of the Week continues to hunger for even more success, remarking, “It felt good to run those fast times, and it is good momentum for the rest of the season because I know I still have areas to improve.”

Matthew also holds #1 long jump in the U.S. for high school and college with a distance of over 25 feet and ranks second in the nation with 46.15 seconds in the 400 meters. He recently signed his letter of intent to compete in track and field at The University of Georgia, along with his Strake Jesuit teammate Caleb Cavanaugh.

The future looks bright for Matthew and his team as the track and field season continues on.