A Time to Celebrate 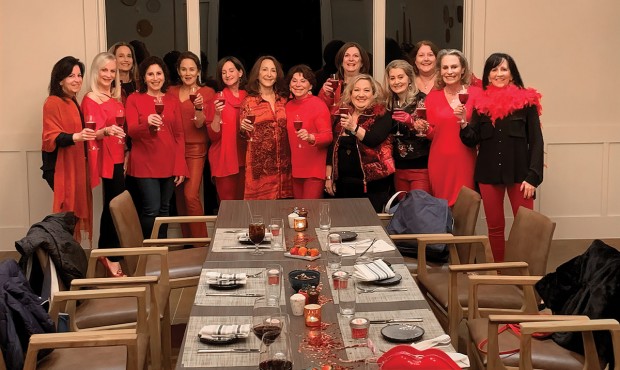 Life is full of daily achievements. Starting the first day of school, acing a test, getting a promotion. Little things that make us smile, prompting little celebrations.

But then there are the big milestones – less frequent, for sure, and often cause for months of asking the question, “How are we going to celebrate?”

The birthday friends had met mostly during their days at The University of Texas, although some met in middle school, some in high school at Bellaire and others through friends. Today, they live in Houston, Detroit, San Diego and as far away as Toronto.

“One year we went on a cruise, one year to Santa Fe,” Elissa says. “Our friend Pam Roberts, who lives in Richmond, Texas, always plans it.” Pam knows how to plan; she and her mother had a meeting-planning business.

For 60, the celebration landed them at the new Miraval Austin Resort and Spa for four days.

“We started organizing it about a year ago, and you had to be turning 60 this year to go,” Elissa says. “Husbands are not invited. It’s just very bonding. We sat and talked about where we are, where we see the next decade going. We’ve gone through a lot with each other. Lots of happy things, some sad things, and we’ve all remained very close through the years.”

The group came up with themed nights, and everyone went all-out to dress on point. “One night we had a red-hot mama night and everyone wore red,” Elissa says. “The other night was a ’60s night, where we all dressed in ’60s costumes. We were just thinking of cute things to do.”

Because most of the women live in Houston, they see each other regularly. But they’ve decided not to wait too long for their next get-together. “At this point, we’ll do it at 65 because we’re not waiting for 70!” Elissa says. 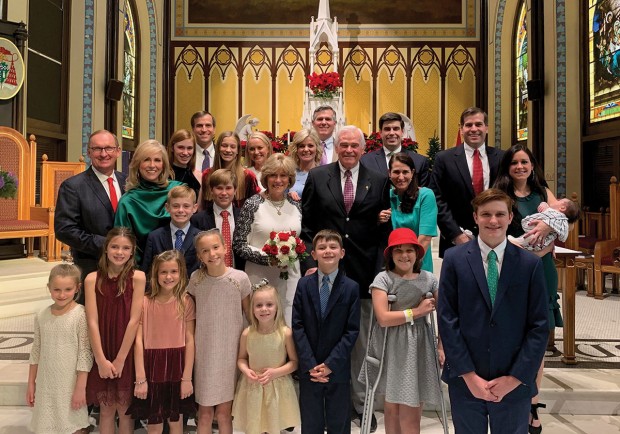 FAITH AND FAMILY The Sullivan family gathered in Galveston this Christmas to celebrate their Catholic faith, 51 years of marriage and their ever-growing family.

For Susanne and Gerald Sullivan’s 50th wedding anniversary in 2017, their five children – Kelley Sullivan, Kristen Berger, Todd Sullivan, Johnny Sullivan and Billy Sullivan – and their spouses threw a surprise party for them.

“It was out of nowhere,” says Kristen, a volunteer and mom of four. “Johnny [her brother] and Sydney’s wedding was a month before, and Mom and Daddy had intended on doing a party but didn’t. We kept ours on the down-low.”

Every year, the family – longtime Galvestonians – gathers on Dec. 23 for dinner at Shearn’s restaurant in Galveston. “Last year, my parents walked in and thought they were just going to dinner, and there was this huge party. We did a video. All the grandkids were there. We had them hook, line and sinker.”

But the surprise tables turned this past Christmas, when Gerald Sullivan made the decision to surprise his passionately Catholic wife and family by converting to Catholicism – on his and Susanne’s 51st wedding anniversary. He enlisted his daughter-in-law, Billy’s wife Jocelyn, to help plan the surprise.

“Jocelyn had converted [she was formerly Baptist] when she married Billy 13 or more years ago,” Kristen says. “Daddy went to the classes with her back then, maybe to honor the fact that she was doing this for his son. And this year he decided it was his time. So Jocelyn called the church and the priest and put together a little invitation and sent it to all of us via email. He had surprised us right back!

“We never worried about the fact that he was not Catholic before,” Kristen says. “He’d always go to church with us, and we believe the basic tenets of all religions are the same. But we were thrilled because it was a sweet act of love for my mom, and that was really special.”

On Dec. 23 of 2018, the entire Sullivan clan – all 25 of them – went to church together as their patriarch received his first Holy Communion and then renewed his wedding vows with his wife. Then the 12 grandchildren lined up in birth order, walked to the altar, and sang O Come, All Ye Faithful. “It was just wonderful,” Kristen says.

By chance, Kelley got engaged two days later, on Christmas. “It was joy overflowing,” Kristen says. “Just a few milestones to celebrate in our family this year!”