Trees that feed body and soul 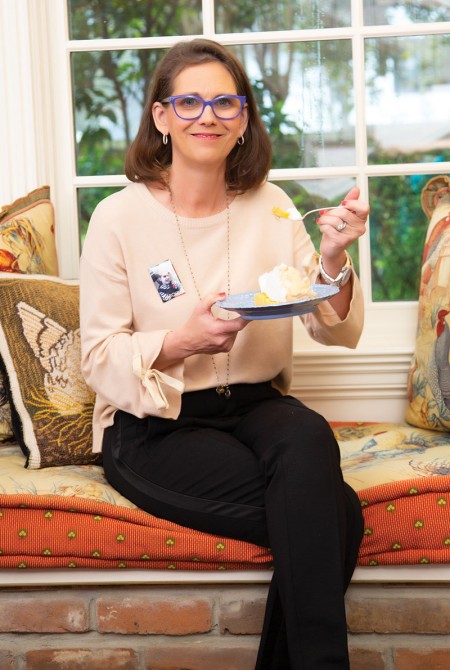 One afternoon in August 2012, Elizabeth DeLuca arrived home to find a tiny lemon tree on her doorstep. Her husband, Anthony, had traded places with her at Texas Children’s Hospital, where their daughter Caroline was in the intensive care unit. DeLuca had run home to quickly change clothes and found the little tree, tied with a card that read: “When life gives you lemons, make lemonade. You are gonna watch this tree grow with Caroline.”

“At the time, we did not know if Caroline was going to live, and when I read that note, I just cried,” says DeLuca. Caroline, 14 at the time, had been born with a neurodegenerative disease and was facing serious health challenges. “And then I went outside right that minute and planted the tree. We never had a fruit tree before, and I put it outside Caroline’s window. It was only 18 inches tall, and now it is a 15-foot-high tree.”

Eventually, Caroline was released from the hospital. “She was very weak for a long time, and that’s when she became dependent on a feeding tube,” says DeLuca. Caroline had stXbp1. “It’s like a pediatric form of ALS. The children pretty typically are able to walk, run, eat and feed themselves, and then they regress and they need an eating tube and stop walking. Caroline died on March 24, 2016. She was here for 18 years, and she was a joy.”

Caroline was the youngest of four daughters that she and Anthony, managing director and chief financial officer of SCF Partners, raised in River Oaks. The other three are Lauren, now 29, Allison, 26, and Virginia Claire, 23.

Looking back, DeLuca says she really did watch Caroline grow along with her tree. “She grew probably six inches,” says DeLuca, a civic volunteer. Caroline enjoyed sitting under the shade of the tree and loved to look at the bright yellow lemons. “To me, now, having lost her, the tree means more to me. I love the tree. I go out and I pick the lemons.” And, she makes lemonade.

“The lemons are fabulous,” she says. “We squeeze the juice out and pour it into ice cube trays and freeze them, and we have lemon juice all year long. I also make the best lemon meringue pies. It’s valid to say that it does not make me sad to look at the tree, but it makes me happy. No matter whatever happens to me, that lemon tree will always be a living reminder of Caroline.” 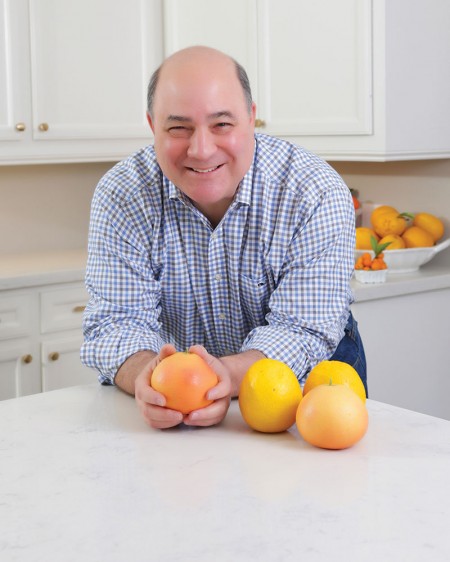 Childhood memories growing up in Galveston inspired Darryl Levy to plant his own trees when he moved to Bellaire in 1990.

“My parents and grandparents had fruit trees, and I thought, ‘Hey, I have a house now!’ and I went into my backyard thinking it was just like Galveston, but it wasn’t. I could not plant easily because of the heavy clay,” says Levy, partner in the law firm of Greer, Herz & Adams, L.L.P., who was initially stymied by the dense, Houston soil. “So, I went and took a fruit tree course from Dr. Leon Atlas at the Houston Arboretum.” And that was the start of his personal orchard.

“I planted some fruit trees, and it was trial and error but always fun to take a chance,” says Levy, who quickly became aware of his backyard’s ecosystem after putting in pitted-fruit trees. “I learned to hate squirrels. At first I thought they were really cute, but they eat peaches, pears and plums and carry them off right before they are ready to pick. It breaks your heart.”

Undeterred, Levy started over with citrus trees, which he learned are less appealing to critters. “There were elements of luck and love and elements of knowledge,” he says, “It’s just a joy watching things grow.”

And, boy, have they grown. Today, Levy has satsuma, persimmon, fig, grapefruit, orange, kumquat and pecan trees that have flourished at his home. “For two weeks in spring when the citrus bloom, it makes the yard smell like heaven.” His trees all bear a lot of fruit – and, surprisingly, more so after his house was flooded during Hurricane Harvey.

“What I did not realize, when Harvey came, was that the weight of the water stressed the trees, and then they bore their fruit heavy,” he says. “That’s one good thing that came out of Harvey.”

And, the greater the yield, the more Levy is able to give away. He and wife Syma, an event and wedding planner, enjoy eating the fruit, but equally like to share it with others. “When you grow fruit trees, you connect with the outdoors,” says Levy. “I like to go fishing, and this is the same feeling as when you catch fish – just like you give the fish away, you give away the fruit to friends and family.” 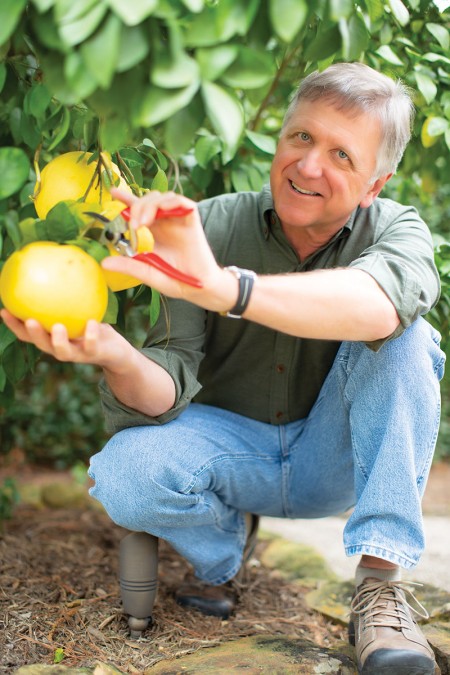 RIPE FOR THE PICKING Bass Wallace cuts a ripe grapefruit off his tree at his home. (Photo: Dylan Aguilar)

It could be said that Bass Wallace has deep roots when it comes to fruit trees. “My mother was a great gardener, and I give her credit for the gene and interest. I spend a lot of time in my yard,” says Wallace, senior vice president and general counsel of TETRA Technologies and CSI Compressco LP.

“I have a grapefruit tree and a Meyer lemon. These are great to grow in Houston.” In the past Wallace also had a satsuma orange and a Mexican lime tree at his Memorial home, which he lost to hard freezes.

He says that Houston’s sub tropical climate makes growing citrus achievable. “They don’t require a whole lot of fertilizer or water once they are established, but they do need drainage and the sunniest spot you can find is the best place to plant them,” he says.

Wallace, who serves on the advisory council of the Houston Botanic Garden, says he and wife Jackie, a local volunteer, enjoy the fruit they grow. “We usually get more lemons than we can use,” adding that because the fruit ripens in late fall, they make beautiful holiday gifts.

“A Meyer lemon is a cross between a lemon and an orange, and they are juicier and sweeter than a regular lemon. Jackie just made some Meyer lemon marmalade, and I can attest that Meyer lemon juice is great in a margarita!” Wallace says the grapefruit is so delicious they eat them right off the tree plain but also add the slices to lettuce and avocado salads. "My grapefruits look like giant oranges, and it’s fun to pop one off the tree and eat it. I like gardening because they don’t talk back,” he says, laughing. “It’s just fun to watch something grow.” 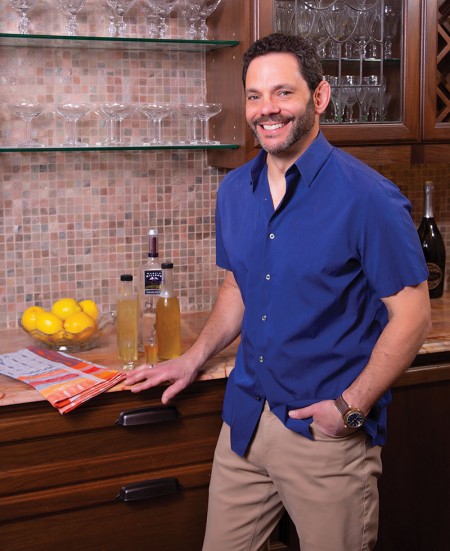 Raised in the Rio Grande Valley, Mark Levine grew up surrounded by citrus. "I am from McAllen, where citrus is king,” says Levine, an attorney and shareholder with Weycer Kaplan. "My grandfather and dad always had fruit trees. They’re easy to grow in the valley, but here it takes a little more effort because our weather conditions and soil are different and it’s colder here.”

Levine, a longtime Braes Heights resident, says having fruit trees is good for the soul. “I always wanted to grow things,” says Levine. “It’s the way I relax. I come home from my office and go out and work in the yard. I spend a lot of time on websites so that I can better understand citrus care, and I also spend time at some nurseries [including Buchanan's Native Plants] around town who are very helpful in explaining the soil you need. There’s a lot of trial and error, but you have to be attentive to your trees and feed them.” There is reciprocity with fruit trees, he says, because they feed you right back.

Levine gets a lot of yield from his Rio Red grapefruit, his Meyer lemon and three olive trees. “In a good year, I get more than 100 lemons,” he says. He and wife Allison, an independent stylist with Stella & Dot, use the lemons for food and drink. “I have a very specific ritual with my lemons. First I take the peel off, and I use that to make Limoncello [an Italian lemon liqueur] in large batches. I will bottle the Limoncello and give them away as gifts. And, we also take the lemon juice and freeze it and use it for baking lemon bars and for other cocktails. I have also started to make a Grapefruitcello.”

And that is where the olive trees have taken his libations up a notch, when he pairs them with his drinks. “The olive trees remind me of going to Napa with Allison,” he says. “They are really easy to grow and taste great.”

The connection between trees and memories is a constant for Levine. “In May 2006, I was driving home from McAllen after the unveiling of my Dad’s tombstone and I saw a sign that read ‘Citrus Trees for Sale.’ I just pulled over, picked out a satsuma orange tree and brought it home and planted it in my front yard. It was an emotional response, and this 13-year-old tree thrives and reminds me of my father and his passion for growing fruit trees.”

Press the pie crust into a 9-inch pie plate. Line crust with parchment paper and fill with dried beans. Bake until crust is lightly browned, about 45 minutes. Carefully lift and remove paper with dried beans and discard. Set aside pie crust and let cool.

In a medium saucepan, whisk together sugar, zest and egg yolks. Once stirred fully, whisk in lemon juice, salt and butter and place pan over medium-high heat. Whisk together 1 cup cold water and cornstarch and add to mixture, whisking constantly, until butter has melted. Continue to whisk for about 5 minutes. The mixture should get thick enough to coat the back of a spoon, and small bubbles should form around the edge of pan. Do not let it boil.

Once complete, pour the lemon curd mixture directly into cooled crust and smooth the top. Place pie into refrigerator and let it chill until set, at least three hours.

In a large bowl, combine egg whites, sugar and salt. Using an electric mixer, beat on medium-high until stiff peaks form. Take pie out of refrigerator and place meringue on top of pie, making sure it touches the crust all around. Bake until meringue begins to brown, about 8 to 10 minutes.

Remove pie from oven and serve.

Pour the alcohol into the mason jars and combine the peel of 15 Meyer lemons. Make sure to scrape off all pith.

Place the jar in a dark place for 30 days, shaking the liquid and peel every few days. After four to six weeks the alcohol will turn bright yellow (color should look like a highlighter). Strain the alcohol a few times to remove the peel and any sediment. 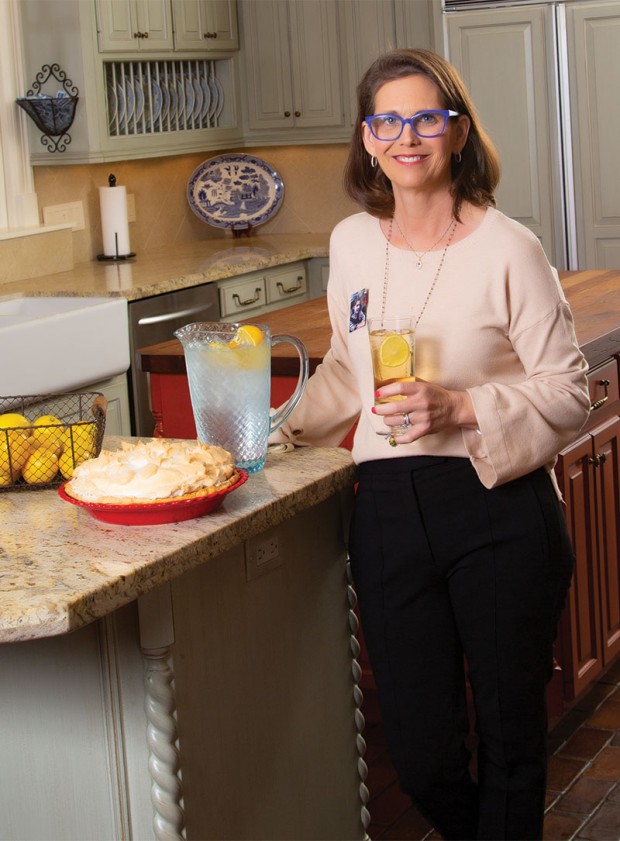 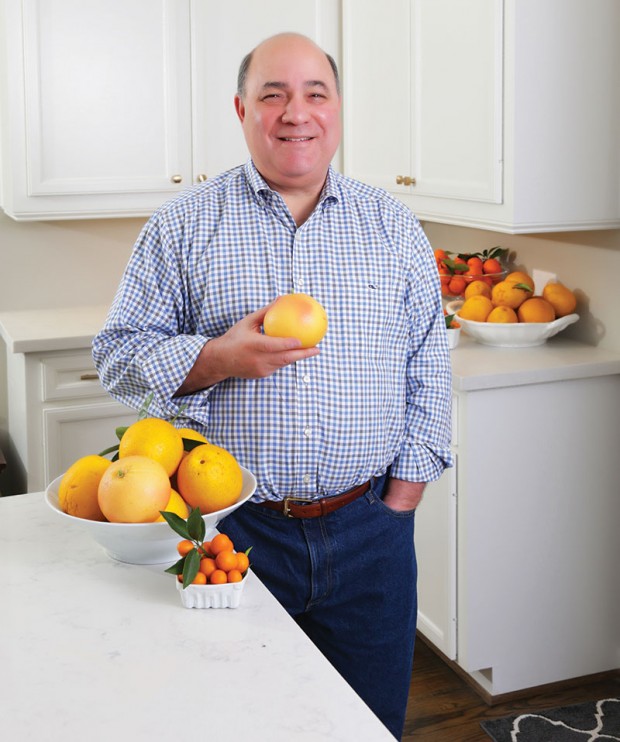 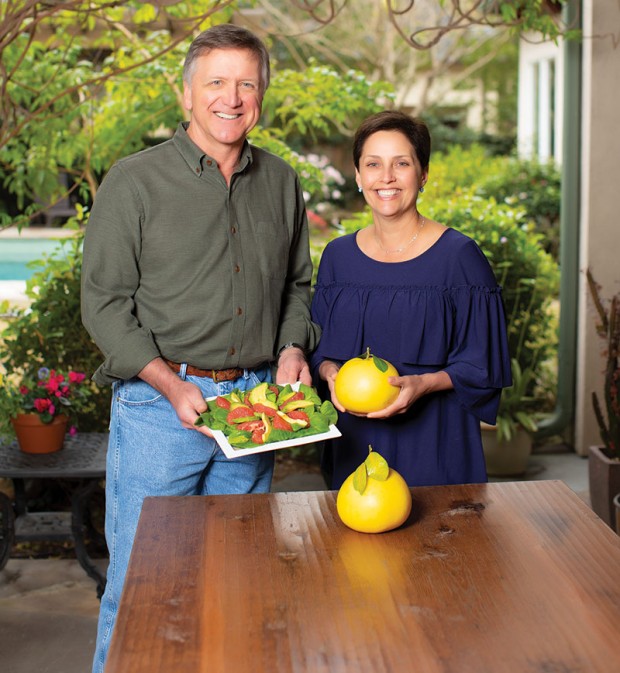 HOMEGROWN HAPPINESS Bass and Jackie Wallace make their favorite grapefruit and avocado salad from the grapefruit they grow at home. (Photo: Dylan Aguilar) 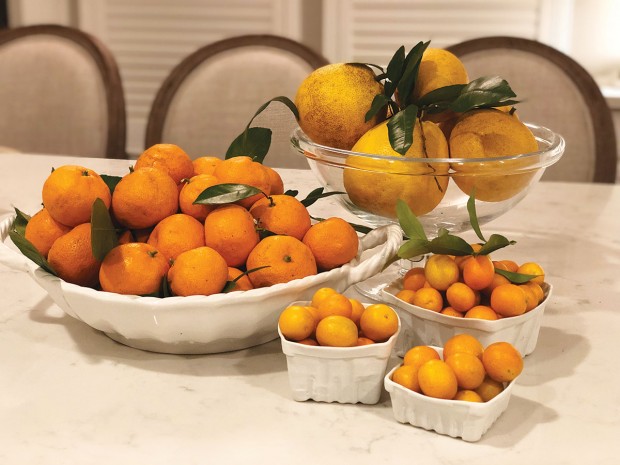 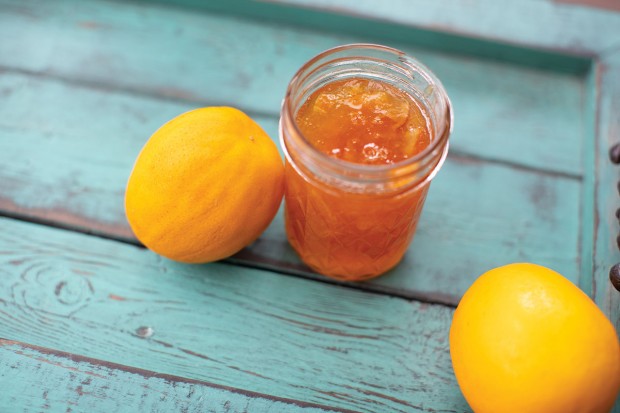