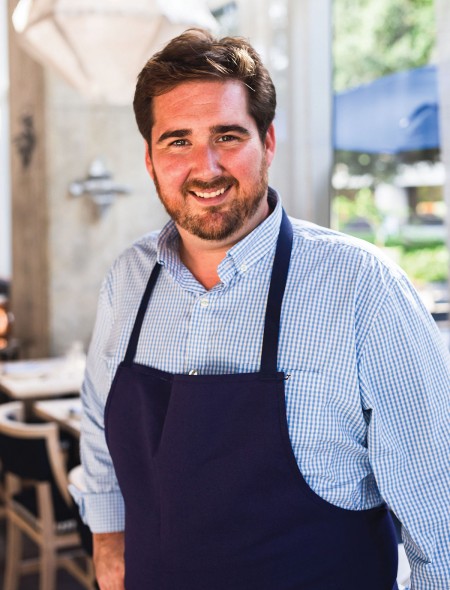 Last October, Eunice quietly opened in Greenway Plaza, and through word-of-mouth, the Cajun-Creole brasserie has become one of the most sought-after reservations in town.

This comes despite hurdles that Eunice (3737 Buffalo Speedway) had faced up until opening day, which originally had been scheduled for 2017. Now, looking around at his bustling 7,000-square-foot restaurant, executive chef-partner Drake Leonards, 33, beams with pride. After all, Eunice is his brainchild, despite riding on star chef John Besh’s coattails, until the native New Orleanian became embroiled in harassment allegations.

Besh since has stepped down and was replaced by CEO Shannon White, and Besh Restaurant Group was rechristened BRG Hospitality. The New Orleans restaurant group owns eight concepts, including the iconic August and the popular bakery café Willa Jean. Leonards was helming the kitchen at BRG’s Luke when he and wife Maggie hatched the idea of a Houston restaurant in 2016.

How did you approach BRG with your idea for Eunice?

My wife and I wanted to be in a place where the food can translate, and Houstonians understand this food. It was serendipity that we met a guy, and this building was his project. We drove out to see the place, and I’ll never forget seeing the live oak trees and falling in love. We went back and pitched the idea.

When did your connection with food start?

Mom and dad were really good cooks. And there are still stories about my grandfather cooking. He had a truck that ran off propane in the ’50s, and he would hook a burner to his truck. He would cook for school functions and fundraisers, anything like that. Agriculture and food were always a part of growing up. We like to say that there was always something warm to eat and cold to drink.

You come from a line of rice farmers. When did you tell your folks that you wanted to cook?

My parents said, “If you want to go to culinary school, you have to work in a restaurant first.” So, at 16, I was hired at this small, country restaurant as a dishwasher. But like many kitchen jobs, a cook didn’t show up until two days later, and I was thrust into making salads and working the frying station.

You’ve had amazing mentors. You’ve worked at Café Boulud for the revered Daniel Boulud and talented James Beard Award-winning chef Gavin Kaysen. What was your takeaway from these guys?

All these guys I’ve worked for, they’ve taken things that they grew up with and translated them for their diners, like Daniel, with his peasant foods of Lyonnaise, right? He turned the food he grew up with into this historic Daniel restaurant on the Upper East Side of New York. Café Boulud was based on humble, classic French recipes that he elevated in a way that makes sense at 76th and Madison. And John [Besh] did this as well, cooking the foods of old New Orleans and serving it in a nice setting.

We do try to do the same here, but we do our best to not lose the soul and essence of the food. We opened with a crab and shrimp etouffee with herb noodles. People were thrown off by the noodles, but it’s been popular. So, it’s not traditional, but it’s a play on something extremely traditional.

Tell us about Eunice and your gumbo.

Eunice is named after my hometown, a farming community near Lake Charles. And here, at Eunice, we serve our chicken-and-andouille gumbo with potato salad. That’s the German influence where I’m from. I love my gumbo with a spoon of potato salad and rice. We would float the salad right on top, but here, we serve it on the side just because people aren’t used to it, right?

You’ve been here long enough to try a few places. What are some favorite places at which to eat?

What about in New Orleans?

What about for breakfast?

Usually, we don’t get up that early.