In the Holy Land 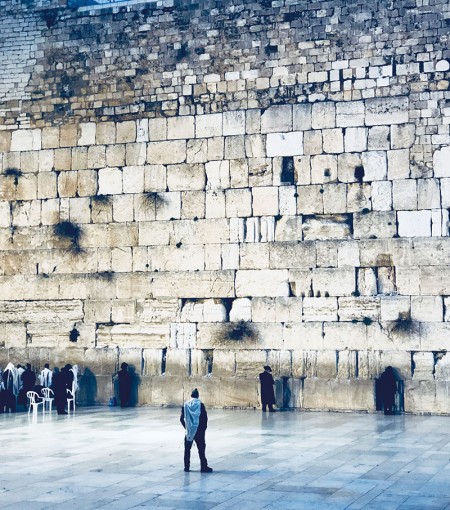 WESTERN WALL Also known as the Wailing Wall, this is the holiest site in the world for Jews, who believe it to be the last remaining structure of the original Herodian Temple Mount complex. Muslims know it as the Buraq Wall, for on the other side is where the Prophet Muhammed tied the Buraq, the riding animal upon which he rode during the Night of Ascension (Mi’raj).

It started out as a wish for a selfie with a camel – but it ended up being a full immersion in history and culture, and a deeper understanding of the world.

Allen Emerson attended a service at Second Baptist Church and came away intrigued by a presentation about Pastor Ed Young’s 10-day Holy Land tour, “Walking Where Jesus Walked.” Crossing the country from Tel Aviv to Jerusalem, the itinerary included the Mount of Olives and Mt. Carmel, the Valley of Armageddon and the City of David, a swim in the Dead Sea and even a baptism in the Jordan River.

He called up an old friend, thinking his friend might have gone to Israel and could advise him about it. On the contrary, his friend had never gone, and was intrigued.

“It took us about 15 minutes to decide,” Allen said. His friend had been wanting to visit Petra, the ancient stone city in Jordan that was named one of the Seven Wonders of the World in 2007. The two decided to combine the two destinations into the adventure of a lifetime. Allen signed the pair up for the Israel tour and then scouted a guide for the Jordan excursion. They settled on Abraham Tours, which offered a Petra tour that left from their hostel in Tel Aviv and featured a two-night stay in a Bedouin tent camp. 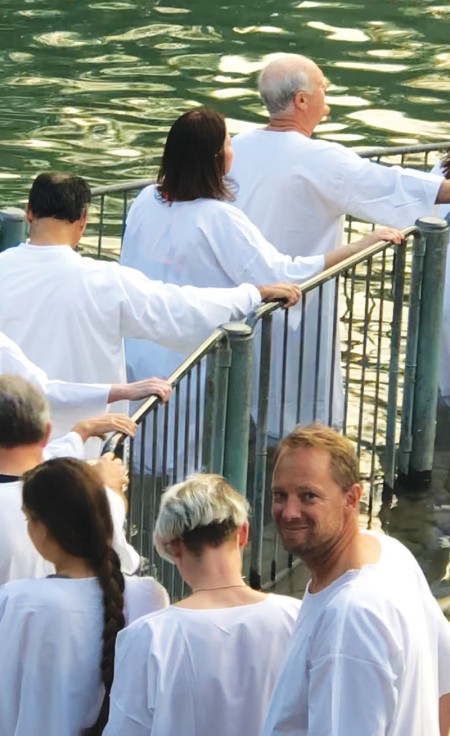 JOURNEY TO THE HOLY LAND One of the most moving moments came when Allen Emerson, looking back, was baptized in the Jordan River.

The pair landed in Tel Aviv with a day to acclimate, so they spent it in the ancient but bustling port city of Jaffa. One of the world’s oldest ports, Jaffa is believed to be the place where Jonah began his strange Biblical odyssey with a whale. It was the disembarkation point for thousands of Jewish people who arrived from around the world in the late 19th century, and it soon became overcrowded, so the burgeoning neighboring community of Tel Aviv began to swell. By the 1950s Jaffa had fallen into a state of decay. A restoration project has brought it back to its former glory, and now the winding old streets exude classic charm; its cafés and galleries and popular flea market now attract artists and travelers.

The next morning, they boarded the bus to Jordan. The tour company took care of passports and currency exchange, and they headed off for the desert for two of the journey’s most unforgettable highlights. Their first stop was in the Bronze-Age city of Jerash, where imposing Roman ruins include ceremonial gates, colonnaded avenues, temples and theaters. Then, after a five-hour drive through the Jordanian countryside, they landed late at night in a completely different culture: that of the traditionally nomadic Bedouin people, who have created a glowing five-star tent camp in the desert.

The Seven Wonders Bedouin Camp would be their base for the next two nights, just 15 minutes away from Petra in the Wadi Musa desert. The ancient Nabataean city carved into the rose-red sandstone cliffs was everything they had dreamed of. The friends geared up for their climb up the 900 steps to the massive Monastery, built in the third-century BCE as a tomb.

“It takes about an hour – people keep telling you you’re almost there,” Allen said with a laugh. In eight hours, the pair saw the most important of the exquisite structures carved into the sandstone cliffs: the stunning Treasury, or Al Khazna, is the first thing that emerges at the end of a half-mile tunnel road, or Siq, that leads into the ancient city. After that they saw the Royal Tombs, the temples and theater that accommodated more than 8,000 people.

“At the top, it’s amazing. Just the magnitude of how big it is, it blew me away,” said Allen. 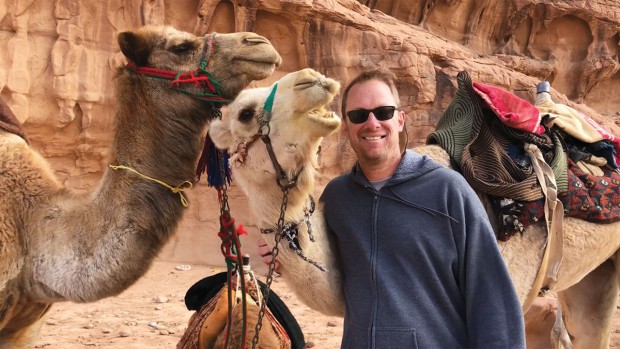 Allen's epic Holy Land journey began as a wish for a selfie with a camel – and ended up being so much more.

He’d seen photos, but never fully appreciated it, “until I stood next to it and saw what they did 2,000 years ago. I stepped back and thought about the process of what it took to do the work and carve the stone…” From the lookout he could see the Monastery, with its ornate Corinthian columns and its fanciful bas-relief carvings, all sculpted into the sandstone cliffside. “That was a highlight, the enormity of it. The detail on the stone was amazing.”

After their hike through the ancient city they headed back to the Bedouin camp. On their second day they headed out to the Wadi Rum desert, where they took a 4-wheel drive tour through the desert to the area where the movie Lawrence of Arabia was filmed. Like the famous traveler, they sat in a Bedouin tent and learned about the Bedouin people and their rich history and culture, and were invited to share a few cups of the famous Bedouin tea.

“This was some of the best tea I’ve ever had,” said Allen. Slow-brewed over an open fire, the traditional tea includes black tea leaves, cardamom, cinnamon, sage and lots of raw sugar. “I’m still trying to work on getting that same flavor.”

The group traversed the otherworldly landscape of the Wadi Rum desert, a national wildlife preserve, where they had lunch and then boarded for the long drive back across the Jordan countryside to Tel Aviv. 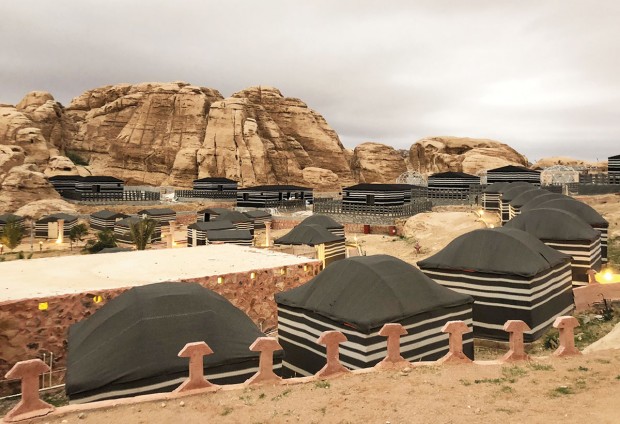 Sunrise at Seven Wonders Bedouin Camp in Jordan, where Allen spent two nights as he explored Petra and the Wadi Rum desert.

After a relaxing day in Jaffa, the pair joined the Second Baptist tour in Tel Aviv and headed north an hour and a half to their hotel in Tiberias, on the shores of the Sea of Galilee. This region was the setting for much of Jesus’ ministry and a large portion of the New Testament – the Sermon on the Mount, the scene where he rescued a doubting Peter by walking on the water, and the story of the loaves and fishes all take place around this area, and gave the travelers much to reflect upon.

On their second day of the tour, they boarded a boat on the shores of Galilee for a voyage on the massive lake’s historic waters. They traveled to the Mount of the Beatitudes by bus before arriving at Kibbutz Ein Gev for a lunch of St. Peter’s fish. Later they visited the site of Peter’s restoration before ending their day at the baptismal site on the Jordan River. There the group was invited to be baptized, and Allen took advantage of the moment, as he had planned.

“I can tell you, it was an amazing feeling,” said Allen. He was amazed to see people from all over the world – a busload of Nigerians stands out in particular – who had come to be baptized in this historic spot. 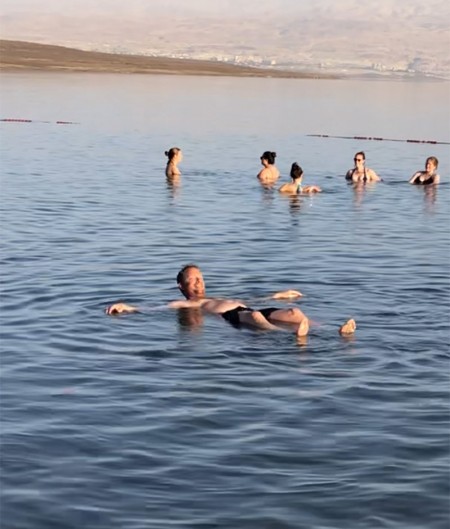 After that the group made its way down to the Valley of Armageddon – which, unlike the devastating scenes presented in the Book of Revelation, is a peaceful, green expanse of fertile land surrounded by rolling hills. They stopped in Nazareth and at Mount Carmel, where the Prophet Elijah had his Biblical showdown with the prophets of another god named Baal.

Then it was time to head back down south to Jerusalem. One of Allen’s favorite memories took place after settling in to their hotel just outside of the old city.

“Someone told me not to walk alone at night in Tel Aviv and Jerusalem, so one of the first things I did was walk alone at night,” he said. “I started looking for some gelato – just started walking through Old Jerusalem and walked all the way to the Western Wall. It’s something I’ve always wanted to experience, and it was everything I had imagined.”

A handful of Hassidic Jews were there, and he just spent a few moments reflecting before heading back to the hotel.

“That was a special moment,” he said. “I would never tell anyone to not walk alone in Tel Aviv or Jerusalem. I never felt unsafe anywhere I went.” 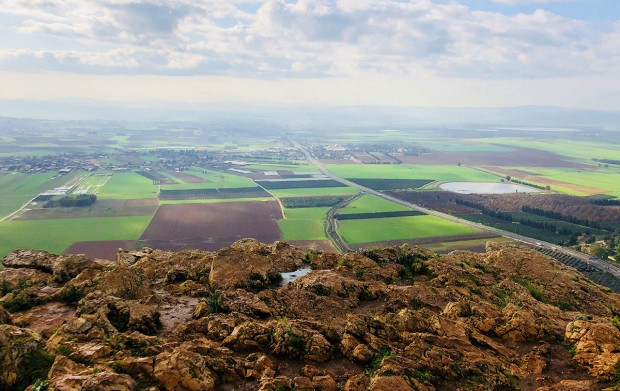 VALLEY OF ARMAGEDDON The lush green Valley of Armageddon, as seen from Mount Precipice, appears as a battleground in the end times described in the Book of Revelation.

That night his journey was just beginning; he would go on to walk from the Damascus Gate to the Lion’s Gate, to the site of Pontius Pilate’s church, to Qumran, where a Bedouin shepherd discovered the Dead Sea Scrolls. There was the unforgettable swim in the Dead Sea, and the moment where the group sang Amazing Grace inside the Church of St. Ann.

“There are so many historical sites … archaeological discoveries everywhere, so many backstories. You read about this stuff, David and Goliath, Jonah and the whale, walking over water on the Sea of Galilee… the Garden of Gethsemane, and the empty tomb – you hear these stories as a child and to be able to see these places – a lot of people commented that you never look at the Bible the same way.”

Beyond the content of the tour itself, Allen was moved by the daily interactions with the Israelis and Jordanians he met along the way, of all religious and ethnic backgrounds. He’d wondered if the region would be consumed by political difference; instead he saw people walking their children to school, working hard to make a living. He has always been fascinated by courage and transformation, and these lands gave him a chance to reflect on the tenacity and capacity of the human spirit.

“There’s a lot of good people – beyond the headlines, beyond the religious differences, beyond all the conflicts, there are a lot of similarities between us and other people in other parts of the world.… I think all in all it’s a lot more similar than I imagined.”