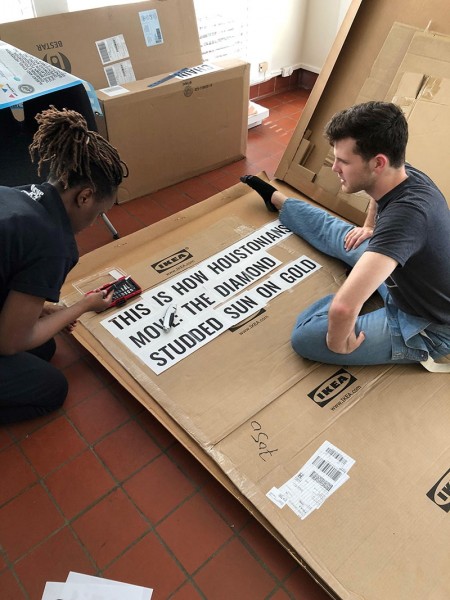 For many Houstonians, rain is associated with loss, grief and the destruction caused by natural disasters like Hurricane Harvey. But three youth poets are showing us the bright side of rain this month, using precipitation to surprise and delight Houstonians through a project called “Rain Poems.”

Using an eco-friendly water-resistant solvent, three teens from creative writing nonprofit Writers in the School (WITS) have stenciled lines of their own poetry in five spots on the trails of Buffalo Bayou Park. The catch: these poems are only visible when wet.

“Rain has a huge emotional weight for us as Houstonians, so I loved the idea to do a project where rain takes on a positive meaning,” said Robin Reagler, Executive Director of WITS. “Our message to the world is that poetry is for everybody and that poetry helps us to focus in a particular moment in time on what’s most important to us.”

Robin said the idea for Rain Poems originally came through social media, when several of her friends sent her a link to a similar project organized by a group called Mass Poetry. That organization was doing a project where they sprayed invisible poems in locations throughout Boston. Dozens of Robin’s friends separately posted about that project on her Facebook page, saying Houston needed something similar. When Robin brought that idea to members of the Bayouth Collective, a WITS group of teen artists dedicated to creating artistic spaces for Houston teens, they ran with it. 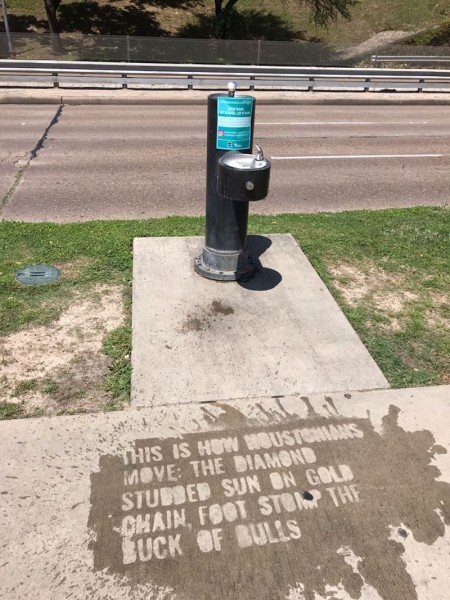 The Bayouth Collective created the public art installation earlier this month in celebration of National Poetry Month. The group partnered with Buffalo Bayou Park and marked the poems with signs at drinking fountains in the park. Passersby are encouraged to splash water on the concrete to find the hidden poems – even when it’s not raining – and then post pictures of the poems on social media with the hashtag #RainPoems.

“Poetry often gets confined to a classroom setting, and it can become drudgery or work,” said Bayouth Collective member Jackson Neal, a freshman at the University of Houston. “We wanted to open it up and make it a source of play or joy for people.”

Jackson, who was recently selected to be Houston’s fourth poet laureate, said the group originally considered a different project, where Snapchat would be the medium to exchange poems. But they decided against it because it isn’t a technology that everyone uses. Public art, he said, would be accessible to everyone. 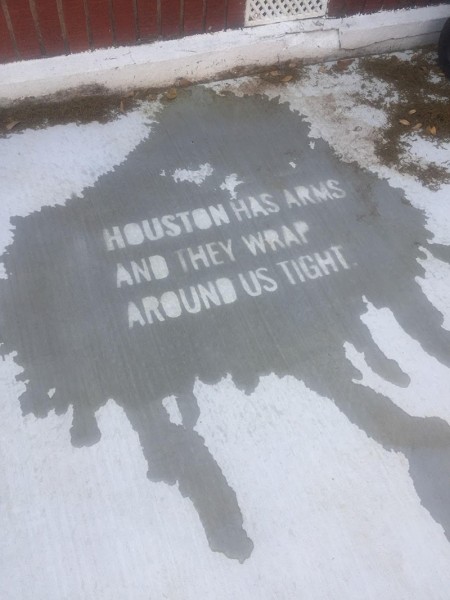 The installation includes a selection of poems by Jackson and the other Bayouth Collective members, Mackenzie Cook and Joyane Eriom. Most of the poems focus on celebrating the magic of the city of Houston. The installation was set up in early April and will likely stay up for about two months.

“Water can really be a source of grief in Houston, and this is really about finding a way to take natural elements and bring some unexpected light into it,” Jackson said.

Below is a list of locations where you can find the rain poems. The poems are all located near water fountains in the following locations: