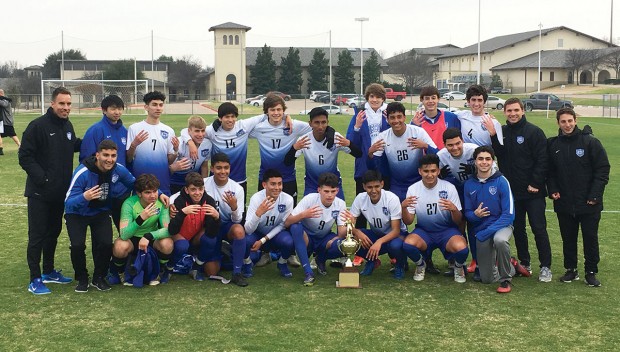 TOP IN THE NATION The Episcopal Knights boys soccer team earned a No. 1 national ranking while going undefeated and winning a fourth straight SPC soccer championship.

In the wake of its fourth consecutive SPC championship, the Episcopal Knights boys’ soccer team capped off a spectacular season ranked No. 1 in the nation by Top Drawer Soccer. In addition, USA Today ranked Episcopal No. 3 nationally among all high school soccer teams.

“That sort of recognition was beyond our goals and expectations,” said Knights soccer coach Travis Smith. “We got the No. 1 ranking right before the SPC tournament, and it was just another motivation for us not to take any team lightly. Our guys responded well.”

Along with its SPC championship and an undefeated 16-0 record, the Knights outscored their opponents this season by a staggering 73-3 margin. Leading the way were senior midfielder Victor Velasco and senior forward Juan Rodriguez, who, between the two, combined for 50 of those 73 goals. Defensively, senior defender Memo Rodriguez and senior goalkeeper Jose Reyes were instrumental in shutting out opponents in 13 of the Knights’ 16 victories.

“We knew this was going to be a great team and the pinnacle of an amazing four-year run for our guys,” said Smith. “This senior class will graduate having never lost an SPC game. They’ve been great since day one when they arrived to Episcopal and simply took it to a higher level this past season.” 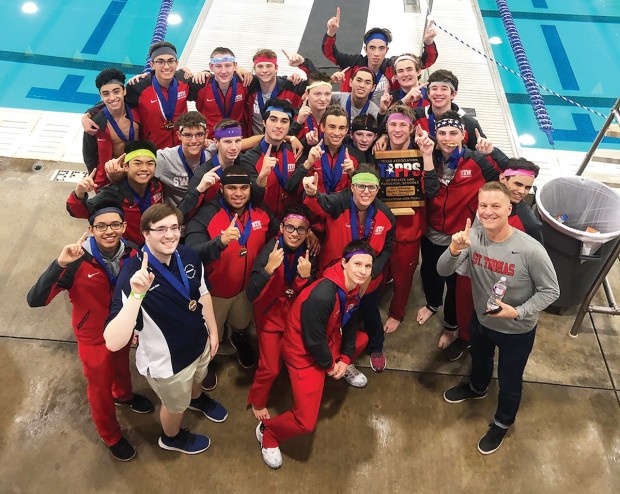 Propelled by a school-record time in the final race of the state meet, the St. Thomas Eagles pulled out a dramatic victory to win the TAPPS Division 1 State Swimming and Diving Championship. The foursome of Sebastian Ortiz, Dylan Michaels, Gabriel Lenz and Shane Williams won the 400-freestyle relay by less than two seconds as the Eagles edged out perennial powerhouse El Paso Cathedral for the state title. The victory not only marked the first state championship in swimming and diving for St. Thomas, but also ended Cathedral’s 28-straight-year reign as state champions.

“It was epic,” said St. Thomas swim coach Donna Skorupinski. “It came down to that final race, and we had our four big guys ready to go. They went out there and swam a great race, and Shane absolutely killed it on the anchor leg.”

While the same St. Thomas foursome broke another school record to win the 200-freestyle relay earlier in the meet, Skorupinski credited a total team effort for the Eagles’ historic championship. “Every kid we sent to state scored points for us, with many of them swimming their personal best times. Our depth was truly our strength. From the very first day of practice our goal was to win a state championship.” 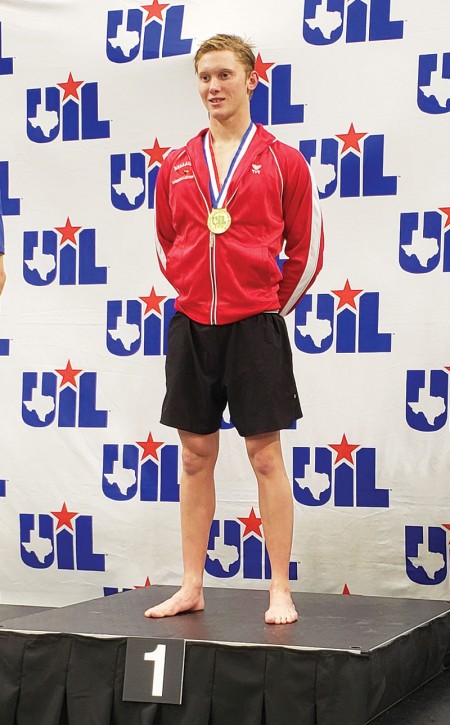 SOLID GOLD With his victory in the 500-yard freestyle at the UIL 6A meet, senior Briggs Shiller became the first Bellaire Cardinal swimmer since 1975 to win a gold medal at state.

With a thrilling victory in the 500-yard freestyle, senior Briggs Shiller became the first Bellaire Cardinal in 34 years to win an individual state championship at the UIL 6A State Swimming and Diving meet. “Briggs swam the race perfectly,” said Bellaire swim coach Kristen Wingenroth. “It was exciting for all of us and a huge boost for our swim program. The last time we had a state champion was back in 1975, so it definitely was a great win.”

Stratford Spartan Emma Stephenson became a three-time state champion in swimming and diving by racing to victory in the 50-yard freestyle at the UIL 6A meet. In doing so, Stephenson broke the Class 6A state record in a winning time of 22.67 seconds. In addition, Stephenson, who will next swim for Texas A&M, added to her trophy case by capturing the bronze medal in the butterfly.

“She’s just an amazing athlete in so many ways,” said Stratford swim coach Michael Hoskovec. “She trains extremely hard every day and is always working on whatever it takes to improve.” 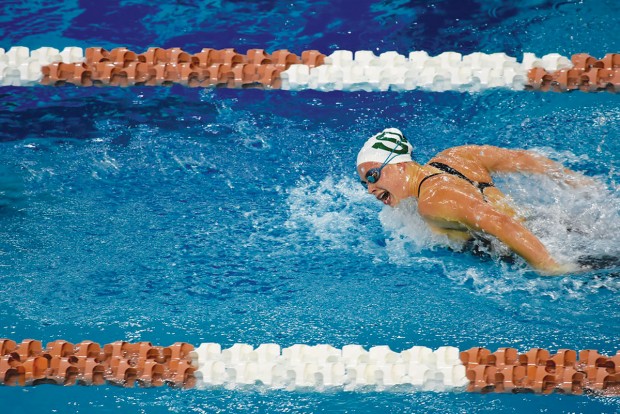 GOOD AS GOLD Stratford Spartans senior Emma Stephenson raced to victory in the 50-yard freestyle at the UIL 6A swimming and diving meet. Along with breaking a Class 6A record in the race, Stephenson became a three-time state champion.

The St. John’s girls swimming and diving team put forth a dominant performance to win this year’s SPC championship. The Mavericks broke eight school records during the meet, including first-place finishes in the 200-medley relay (Lexi Pickens, Ainsley Dodson, Ella Flowers and Georgiana Mathews) and in the 200-freestyle relay (Mathews, Dodson, Katie Shelburn and Sydney Buchman). The Mavericks were also bolstered by a second-place finish in diving by sophomore Cai Flowers.

Meanwhile, among the boys, St. John’s finished second overall, while breaking seven school records in the meet. The foursome of Rhys Beauchamp, Will Sampson, Eric Wang and Jordan Fullen set the pace for the Mavericks by winning the 200-medley relay in the first race.