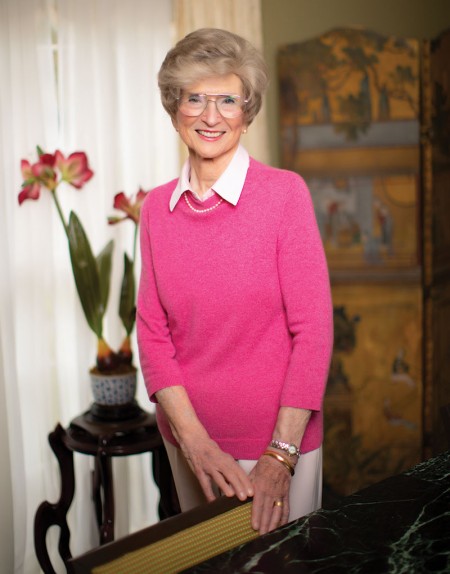 PRETTY IN PINK Katie O'Sullivan is a writer and painter whose own fascinating life inspires her work. (Photo: Dylan Aguilar)

Carolyn Johnson suggested we meet her friend Katie O’Sullivan, “one of those people that people like being around.” She told us Katie had written a memoir with incredible detail: “She has the gift of adjectives and will write about something that happened 50 years ago and will remember what somebody had on.” We had to meet her.

Katie O’Sullivan greets us at her pretty, traditional West U home dressed in pale pink slacks and a pale pink button-down topped with a rose-colored cashmere sweater. “I like pink,” she says. With pearls, perfectly coiffed blonde hair and a smile, you’d never guess she would be turning 94 this summer.

Nor would you guess that Katie, a mother of seven and grandmother of 13 who looks like the quintessential Southern lady, has lived such an extraordinary life, one that’s taken her around the world.

It began when Katie met her husband of 64 years, Edward Patrick “E.P.” Sullivan at a tea dance for young World War II naval officers at the Hotel del Coronado in San Diego. “He came over and had the strangest accent I’d never heard, which was called a Boston Irish accent. He was a beautiful dancer. He didn’t have a car, and I didn’t drive, so he walked me all the way home. That’s how it started.”

Katie’s father, a military doctor, approved, as did her mother. After three years on a destroyer in the South Pacific, and after Katie had dated several other “darling boys,” E.P. returned to California to propose. “I was in my junior year at UCLA and really didn’t want to stop,” she says. “But he wanted to get married, and my parents pushed it because they really liked him. So I signed out of school.”

The young couple moved to Boston when E.P. was offered a job with Esso (Exxon) working at a gas station. It was right after the war ended, and everything was rationed. “I had my stamp book, and we could only get so much meat, and no butter,” Katie says. “I would go looking for places to live near Beacon Street in my high heels – they were very high – up and down the cobblestones. I finally found a place with one room in one of the old Beacon Street mansions. We shared the bathroom with a darling young couple from Philadelphia.”

E.P. rose through the ranks at Esso while Katie had babies one, two and three. When she was pregnant with her fourth, her husband was asked to move abroad for the company. “He said either Paris or London, and I was so excited. But then he came home, and I asked if we were going to London or Paris. He said, ‘Well, it’s neither. It’s a place called Lebanon.’ I said, ‘Where is Lebanon?’” And off they all went, with their dog Sandy, on an 18-day boat ride to a new country.

“We got there in January, and everything was green and shades of aqua, just like Southern California.” So began 15 years in Lebanon, punctuated by more births and interludes in Libya (“Only for one year, thank God.”), the Netherlands, and, again, New England. “We really loved Lebanon,” so much so that E.P. formed his own company and moved the family back when their youngest was two.

“It was just the most beautiful, golden time in Lebanon,” Katie says, “like living in Paris or London except we had skiing in winter, water in summer.”

Lebanon was a life of formal gowns, silver sets for 24 and receptions with dignitaries: King Paul and Queen Helena of Greece, the Shah of Iran and his Empress, and King Saud of Saudi Arabia. Of entering a palace to meet a king and queen, Katie writes in her memoir, “I was startled to hear our name and the name of our company called out to the assemblage who automatically sized us up and down."

A proud  accomplishment was the hospital volunteer troop she organized for young patients whose families had to leave during their treatment. She recruited American friends to visit children and bring toys. Katie named the group The Pink Ladies. That was 1957. The Ladies in Pink, as they are known today, are now mostly Lebanese volunteers, still visiting the children at the hospital.

When she and E.P. eventually retired to Houston, Katie began writing – essays, poetry, plays and short fiction. Rose-colored Glasses: A Memoir of a Family Affair with the Middle East was self-published in 2015 at the urging of her son Chris. The 255-page, hardcover book details the O’Sullivans’ adventures and intersperses stories of carousing with international news correspondents, Russian spies and ambassadors with those of children’s broken bones and family picnics.

Katie lives across the street from her daughter, Liz Winslow, a retired dentist and an artist. While E.P. passed away in 2010, Katie still paints and is an avid participant in her writing group. She drives herself and maintains that she’s kept her figure by chasing children, adding, “Yesterday, I think I was up and down the stairs six or eight times.” And so the chapters continue in Katie O’Sullivan’s storied life.

8:30 am to 10:00 am
Location:
First Baptist Academy
END_OF_DOCUMENT_TOKEN_TO_BE_REPLACED