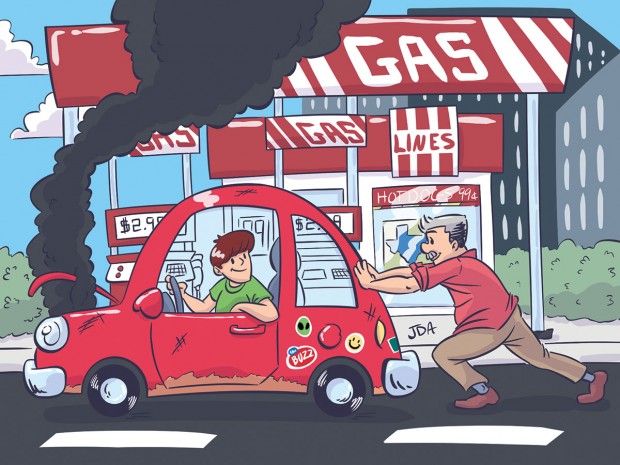 BEING NICE One small act of kindness can make a positive impact on everyone around you. (Illustration: behance.net/runamokstudios)

Every once in a while, something happens that reminds us how good people are. On a recent Saturday morning, I was stopped at the light on Weslayan and Westpark when I saw a young man struggling. His car had gone dead in the middle of the street. This is Houston, and cars move fast, and people get really impatient. But I saw a man pull his car to the side of the road, jump out, and help the young man push his car into the parking lot of a nearby gas station. It made me smile.

Small kindnesses are happening all around us, all the time. They might be as seemingly insignificant as smiling at people at the grocery store or paying for the person behind you in the drive-through line. But the ripple effect – a domino of smiles – is real.

One Bellaire woman says, “I make a giant – and I do mean huge! – pot of chicken matzah ball soup, even though there are only three of us at home. After dinner, I put [the] soup in containers and post a message on Facebook to see who’s feeling under the weather, who’s had a rough day, or who just needs some free soup. Within minutes, I usually get comments and find out who’s been sick or who just needs a gesture of kindness. And within the hour, I deliver the goods.” The woman’s teenaged daughter watched and was inspired to create her own version of delivering kindness. “She baked an extra apple pie this past Thanksgiving for a surprise recipient. She literally showed up with a fresh baked pie the night before. I can’t tell you how happy that made me to see her do this.”

Another mother of four recently left a canvas tote in her car while she ran into a lunch. She returned to her car to find the window broken and the tote gone. “It had nothing of value to anyone,” she says, “but it had my entire Christmas list and the record of who I had sent cards to already. That, to me, was gold.” Later that day, the woman got a call from a pizza delivery man who had found the bag in the street and returned it to her. “Kindness won,” she says.

Dena Prasher, a marketing executive, says she’ll never forget the friends who supported her family when her father-in-law, from South Texas, died in Houston. “He did not know anyone here other than his son (my husband at the time), me and our children, and there was no one to come to a funeral,” she says. At the service, she was amazed. “Not only did all my friends show up, but when we came home to an empty house, where I had assumed I was going to scrounge something together for dinner…, my friends had arranged for someone to go to our house during the funeral, set the table with our family linens, china, crystal and silver and had a roast beef cooking in the oven. We were touched beyond words.”

Loss often brings kindnesses, and Peggy Haney, director of advancement at Episcopal High School, says she always remembers the friend who reached out to her on Mother’s Day the year after her mother had died. “It was so thoughtful of her to know that this day would be hard for me without my mom,” she says. “I now try to pay it forward and remember not only my friends’ happy anniversaries but hard ones, too.”

Linda Elmer, a mother of two teenagers (and two dogs), said she was struck by the kindness of a young man she never met. “My mother had just arrived downtown after taking the Vonlane bus from Dallas. We weren’t able to pick her up on time, so she was Uber-ing to our house. This was her first time to use Uber, and she was standing on the street corner looking at her phone, clearly needing help. A young man approached, smiled, and said, ‘Here, let me help you.’ He took her phone and showed her how to identify her driver and where to look, and then said he was a driver, too. Mom said, ‘Oh, are you my driver?’ to which he replied, ‘No, I actually drive for Lyft.’ We were all blown away at his kindness and willingness to help despite her use of his competition.”

These are all small acts, but the people who they impacted will never forget them. Smile at the stranger next to you in traffic. You never know how far it might go.