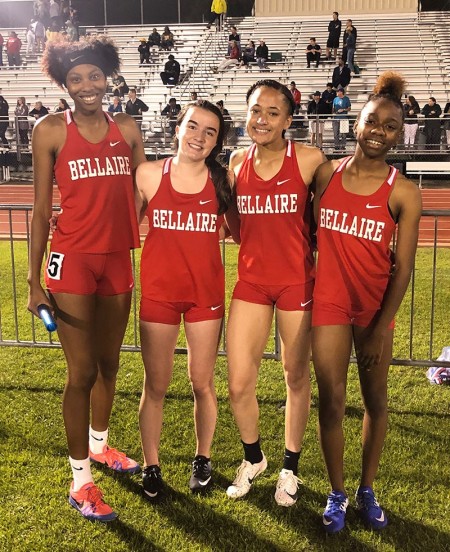 Bellaire High School’s girls 4x4 relay team is running away from decades of history. After being labeled as a mediocre team in Region 6A (the toughest region in the nation) they won the district title for the first time, broke the school record and were ranked as eighth in the nation.
Junior Annie Brownfield, senior Jordan Brown, freshman Kayla Smith and junior Sydne Porter were key to rewriting Bellaire High School’s history, so I decided to sit down with these four track stars to get their take on the successful track season.

IS: Can you all tell me what place you all got?

AB: We got fourth in the regionals meet for the 4x4 race. But we were ranked number eight in the nation.

JB: That does not really make sense but it is because Texas has the fastest teams. So us being eighth in the nation, means that we bid out the other 50 states, and it puts us on those charts.

AB: The district that we are in, 6A, is the hardest in the country. We got unlucky with that.

IS: How did the coach decide for you guys to be on the 4x4 team together?

JB: All of us had to run the open 400 meter race to know our time. Since we all had good times, the coach (Coach Corita Swede) just put us all together.

KS: Individually, we all have to have a solid 400 meter time, and then usually, the fastest girls are put on the relay.

AB: They did not put us together until out Rice University meet, which was right after Spring Break. Our coach (Coach Robert Curtis) was trying out different combinations and realized we worked really well together, and it just stuck.

IS: How has being on track helped the four of you all become closer to each other?

SP: We always are working together, so it is more like a group.

IS: How did you guys get into track in the first place?

JB: I started in sixth grade because my mom was the track coach. She just signed me up for the season.

KS: I started when I was younger with a youth summer track team. Then I took a break and started back up in seventh grade with a new summer team and have been running since then.

SP: I started in elementary school when we used to run the timed miles. One of the coaches wanted me on the team, so I just started running. But, I did not get serious until tenth grade.

IS: How did you all react to being ranked nationwide?

AB: I actually just found out from our team group chat.

JB: After the meet, I was frustrated because it was just so hard to make it to the finals. So, I just asked my dad where we sit, and he said number eight. And all of the teams before us from numbers one through seven were all Texas teams.

SP: I was really shocked because I thought we would advance.

KS: I was really shocked when we were at Rice University and the announcer said we were number 25 in the nation. In our earlier meets, we were further down in ranking, but when we got to regionals, we got our times down.

JB: I was surprised, but it was not that shocking because we worked so hard for this.

IS: Did you all expect to qualify for state?

JB: We were favored to qualify, but we were the most underrated team at the regionals meet.

JB: Yeah, we had to fight for that spot to just be there.

IS: How have your coaches helped push you throughout the season?

AB: We have one coach that has a very positive mentality.

JB: The other coach gives us pep talks before the races.

AB: She is really the best coach and always helps us stretch out before our races.

SP: I really like her because she is so hard working.

IS: How has this season been different from previous seasons?

SP: This was also our first year winning the district races.

IS: Can you explain how not having a track at school has been a hindrance to your performances?

JB: This year we started working out in January, because we did not have track and had to practice at Butler Stadium or Godwin Park. So, we were behind on the game. It ran more smoothly towards the end, but in the beginning it was hard.

AB: We normally start our season in October, so we started very late.

SP: This is still my best season so far though.

IS: What kind of teamwork have you guys had throughout the year?

KS: I am a freshman, so coming on to the team with these older girls has been great; they have become like my mentors for track. Our coach put the relay team together, and we just practiced a lot during the season and all worked hard individually and together.

IS: Do you guys hope to pursue track in the future?

JB: I am actually going to do track in college. I have not committed anywhere yet, but my plan is to go to University of New Orleans.

KS: I want to pursue track in college. That is my next step.

SP: That is also my plan.