Caring for baby – and planet 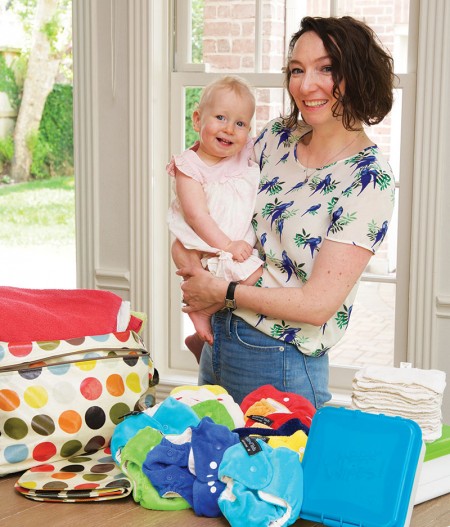 ECOMOM Rebecca Brownlie uses colorful cloth diapers with her third child, Imogen. On the right are some of her cloth wipes, which she keeps in a lidded box with water and lavender oil. Dirty wipes go into a different box with water and tea tree oil drops as an antiseptic. (Photo: Natalie Griggs)

When Rebecca Brownlie had her first child, she was overwhelmed, integrating details of baby care with her full-time job in finance, and so her lifelong environmental sensibilities went on the back burner. Paradoxically, it was Baby No. 2 that made her rethink the diaper dilemma.

“I was probably like most moms; the thought of cloth nappies was too much to consider on top of everything else,” said Rebecca – who is Scottish, hence the “nappies.”

With her second child, she had both babies in diapers, and was shocked at how fast her wastebaskets were filling up. “I felt guilty for the amount of waste I was generating,” she said.

In fact, with some 30 billion disposable diapers going into North America’s landfills each year, Rebecca’s concerns are not unfounded. And she’s not the only one thinking about the problem. Carrie Ephraim, too, was disturbed at the thought of the truckloads of trash generated by disposables. So the two mothers tackled the problem from different angles.

Rebecca invested in a set of colorful, unused nappies on eBay, and Carrie invested in a diaper service. Both say the approach is no harder than using disposables, and the cost is the same or less.

“Once I decided to make the switch, and spoke to a friend who was already using cloth nappies to get some tips, it was actually really easy,” insisted Rebecca. “To me, a cloth nappy is exactly the same as a disposable nappy except that instead of putting it in the rubbish bin I put it in a nappy bucket for the washing machine – that’s it.”

After much research, she settled on the “dry pail” method. She bought a bucket with a lid, and she sprinkles a little baking soda at the bottom to keep the odor down. She also sprinkles a few drops of lavender on a piece of cloth for extra odor control.

Cloth diapers are all the rage in Australia and New Zealand, where Rebecca lived for 11 years before moving to Houston. Here, she was surprised to find almost nobody using them.

“I get a lot of comments from other parents who say, ‘Oh, we haven’t seen these nappies before,’ and that just breaks my heart.”

Carrie, too, was concerned about the waste. “When you start to have kids, you start rethinking all your values,” she said. “You think about what they’re going to be left with at the end of the day.”

Carrie found out about Dry Baby Cloth Diaper Service through her doula. She was delighted to find out that such a service existed; still, she was apprehensive about the messiness. When her doula explained that a diaper service would take care of that, she gave them a call. They sent a specialist to give her a tutorial before the baby came.

“They just make it really, really simple – essentially you buy these rubber diaper covers, you change them every couple hours, you put them in the diaper pail, you drop it off outside your door, and new diapers appear, then rinse and repeat. Easy-peasy, done.” She doesn’t have to empty the diaper or pre-rinse. The only time she tosses anything into the toilet is later on, on occasion, when a toddler is older and nearing potty training.

There’s another reason Carrie prefers the cloth diapers: in her view, they are the safer, healthier option. “I had eczema growing up as a kid that was severe, and I had to be on steroid medication. My husband has sensitive skin, and my mom has autoimmune disorders. So it was important to me to start my children off on the best foot possible,” she said. “When I was looking at disposable diapers, there were a lot of different chemicals I wasn’t comfortable putting on my child’s skin, especially being a newborn.”

Carrie just had her second child and is again using Dry Baby. Rebecca now has her third child, who is using the same cloth nappies, and she now uses cloth baby wipes (Cheeky Wipes). But if less waste and less chemicals aren’t enough to convince parents to move to cloth, then perhaps the financial savings will. “I have saved about $1K a year by moving from disposable to cloth nappies,” said Rebecca, “which is always a bonus!”