Shaping the World through Art 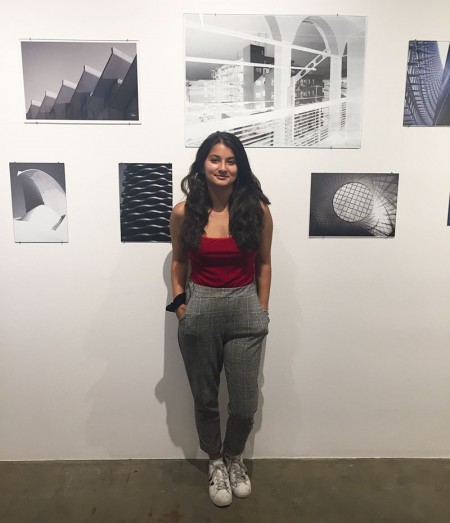 “Joining a group of teenagers who had full autonomy on what they did with art sounded like Heaven,” says Jamauri Bagby, a senior at Stratford High School. Jamauri has been a member of Houston’s Contemporary Arts Museum’s Teen Council member since 2017 and says that his experience with the Council was a great avenue to explore his passion for the arts, especially since art has always been his way to “connect with people through a common ground” and experience other perspectives.

Walking through the Teen Council’s 11th and most recent exhibition, “Shapeshifters,” it was clear to see why Jamauri was drawn to being involved with CAMH and its Teen Council. “Shapeshifters” is full of bold, thought-provoking art. At first sight, with a papier-mâché skeleton in the middle of the exhibit, a big, boxy computer in the right-hand corner, Etta James’ “At Last” playing softly from a neon light, and countless paintings, portraits and modified mirrors all over the walls, the common theme wasn’t immediately clear. However, upon a closer look, it was clear that all the pieces displayed teens coming to terms with their identity. 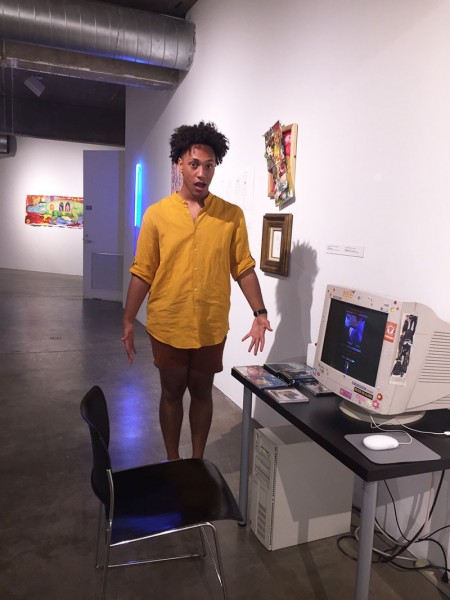 Jamauri Bagby posing with “Geocities Reloaded” by Bryce Pannell. He said he liked that the piece is interactive and incorporates items from the ‘90s and 2000s. (Photo: Aarohi Sheth)

Through their art, they were making sense of themselves and, as a recent high school graduate myself, I found their art relatable and awe-inspiring. Mina Silva’s “Thin White Sheets,” an audio piece on school shootings, brought up all-too-recent memories of the various drills and talks we had throughout high school, while the self-portraits and photography captivated me with how much grasp the artists had on their identities already at such a young age.

The CAMH’s Teen Council started in 1999 as a way for teens to get more involved with art. Olivia Vargas, a senior at Houston Christian High School and Teen Council member said she was compelled to apply to the Council because she, “wanted to broaden [her] horizons and find a community that liked contemporary art as much as [she] did.” The Teen Council is just that - it’s essentially a group of 14 teens from all over Houston who curate art made by their peers in order to put on biennial art shows. 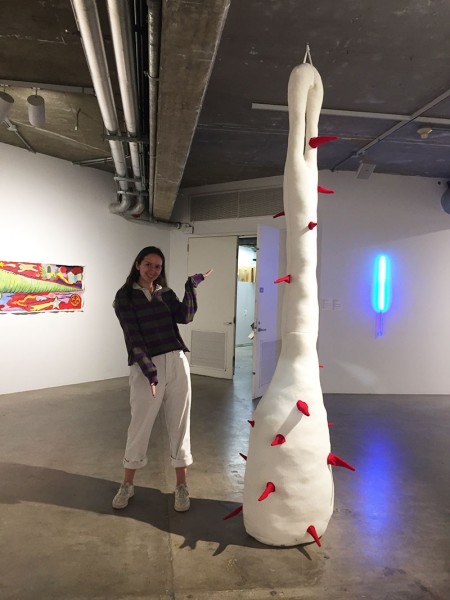 Olivia Vargas with “All Isotopes are Loved” by Garner Lazar-Pope. She said the unique material of the sculpture really resonated with her. (Photo: Aarohi Sheth)

“The museum is a place for teens and their perspective. That’s the idea behind Teen Council and the “Shapeshifters” exhibit,” says Michael Simmonds, the Teen Council and Public Programs Coordinator at the Contemporary Arts Museum of Houston.

The CAMH’s “Shapeshifters” exhibit showcases teens’ artwork that reveals their shifting identities and evolution in response to what’s going on in their surrounding culture, society and general atmosphere. With more than 700 submissions, the Council had to pick pieces that fit within one of the exhibition’s five themes, which they had collectively chosen: Identity, Documentation, Generation, Organic Shapes and External Shapes. This process led to a beautifully diverse exhibit of 80 works including architecture photography, sculptures made from felt, foam and papier-mâché, self-portraits, collages, a documentary, and many more pieces of varying mediums that all embody teens’ interpretations of the world around them. The Council also has a wall labelled “Connect + Discover” where visitors of the exhibit are asked to write something that shaped them onto a post-it and stick it to the wall. It’s covered in all kinds of answers ranging from various TV shows and movies to names of friends and family members. 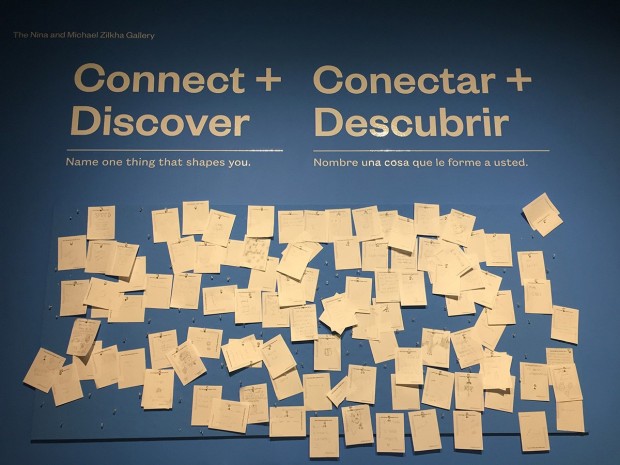 The interactive “Connect + Discover” wall prompts visitors to write down things that have shaped them. (Photo: Aarohi Sheth)

Naturally, with teens both creating and picking the art for the exhibits, there’s an intersection between the groups. Olivia said that “because [the council members and artists] are both coming of age and growing into [their] own skin, there’s a common understanding between [them] and the artist.” This common understanding is manifested in the kinds of pieces picked for the exhibit. For example, there were a lot of photos, an audio piece, and a documentary about protests, various social justice movements and school shootings. These personal submissions would be particularly impactful to teens because they’re events that they’re especially familiar with at this point in our socio-political climate. 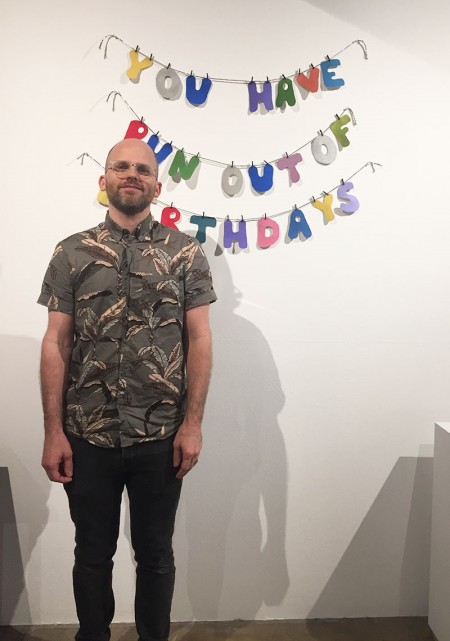 Michael Simmonds with “You Have Run Out of Birthdays” by Calista Garcia. He said he loves that this tongue-in-cheek piece has a unique take on approaching adulthood. (Photo: Aarohi Sheth)

It’s clear that the artists are molding their perspectives according to their surroundings and as a result, creating “shapeshifting” art. Jamauri reasoned that teens and their work are the shapeshifters. With the “Shapeshifters” exhibit, he “could see how teens shaped their own reality and defined themselves with their art. Even though the art piece stayed the same, the meaning can change over time—art is a shapeshifter.”

“Shapeshifters” shows how teens from all over Houston have artfully picked which parts of their various circumstances have defined them. It shows the value in the nuanced perspective teens can bring to art as well as the world; it validates the teenage voice and perspective. Both Olivia and Jamauri emphasized how they felt that teens are often given the quietest voice, due to notions that they’re too young or inexperienced to understand a lot, but with the CAMH’s Teen Council, these “quiet” voices are amplified and heard by all types of people.

Find more information on the Teen Council and the application process here. High school students (ages 13-18) can apply to join the Council for a maximum of two years; the application is usually due in late spring. The Shapeshifters exhibit is at the CAMH through June 16 and is free to visit. 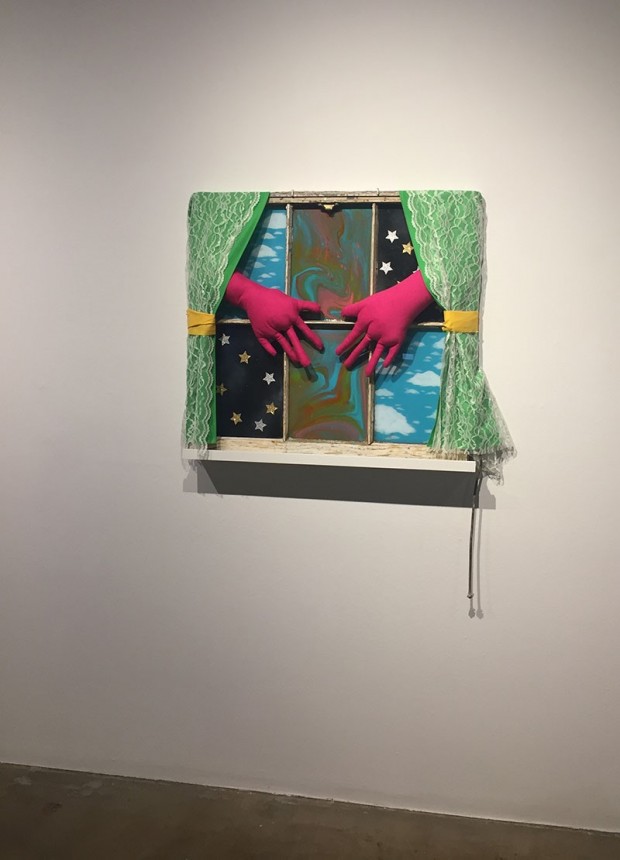 Sam Lam’s “Through the Bedroom Window” made with a windowpane, acrylic, spray paint and fabric. (Photo: Aarohi Sheth) 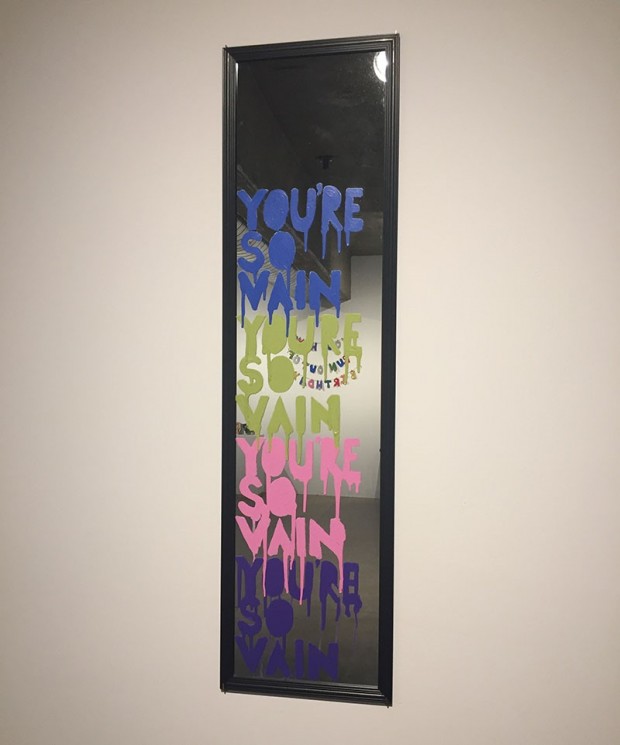 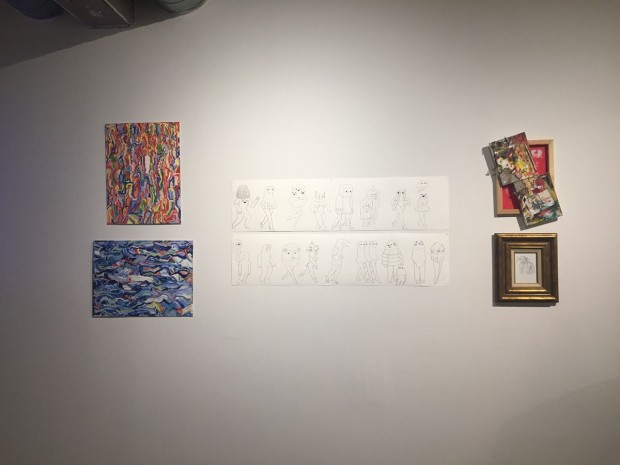 Artworks from the Organic Shapes category in which artists incorporate bodies and faces into their pieces. (Photo: Aarohi Sheth)