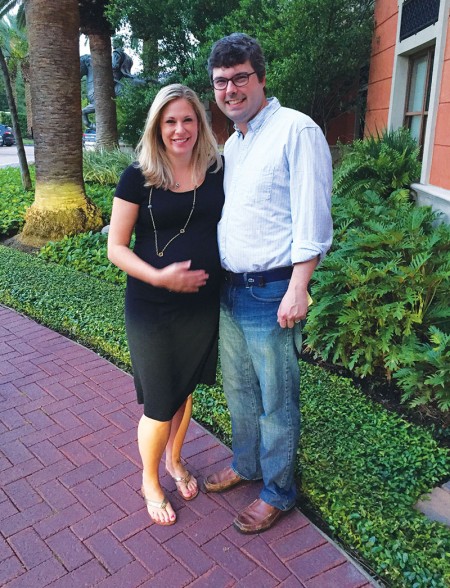 UNWINDING NEAR HOME Lauren and Bryan Frazier enjoyed a stay-in-Houston weekend at Hotel Granduca while expecting their second child.

Planning a kid-free getaway can be challenging. It’s not easy to hop in the car or on an airplane and leave life behind. And then there’s the price of gas, airline tickets and car rentals – and time off from work. Aren’t vacations supposed to be relaxing?

So why not vacation in Houston?

Take an escape from loading the dishwasher, folding mounds of laundry, trying to match tiny socks, cooking dinner, going to work, and the rest of it.

Recently, I ran into a couple I know having cocktails in the bar at The Post Oak Hotel. They were, in my opinion, mastering the art of the staycation. They were staying the night at the hotel – and said they were “mentally miles away” even though they were around the corner from their house.

Lauren and Bryan Athon also spent a night last December at The Post Oak Hotel. Her parents watched their two children, 3 months and 3 years old, so they could celebrate Bryan’s birthday. Sleeping in a comfortable bed with no interruptions was enough to make the couple feel like they had been whisked away. “Houston is such a great city to explore as a tourist,” said Lauren.

Another local couple – also a Lauren and a Bryan, but with the last name Frazier – know all about that strategy.

They are frequent “staycationers” and even planned their two babymoons (a vacation while expecting) in Houston. One was at The Houstonian Hotel and Spa in August 2013, when Lauren was pregnant with their first child.

“It surprisingly felt like a real getaway even though it was only one mile from our house,” she said. “There is something about leaving your house – and all the responsibilities that come with it – to relax…. The ambience, the trees and natural surroundings made us feel like we could exhale.” The adults-only pool helped.

For their second babymoon one year later, while expecting their daughter, they stayed at Hotel Granduca. “The feel is a bit more city-ish but still felt very relaxing,” she said. Lauren had a prenatal massage at the hotel, and they ventured out for dinner at nearby Ouisie’s Table. “The pool atmosphere was fun and hip, so we felt cool, even though we had a 1 year old and were expecting our second,” said Lauren, laughing. “This staycation came about on a whim, which is the clearest advantage of a staycation. We booked it Wednesday and were hanging by the pool Saturday.”

Over last year’s Memorial Day weekend, Lauren took another staycation at Granduca, but this time with 10 girlfriends. They relaxed by the pool and sipped fruity drinks. “After our afternoon, we got ready and went out for a nice dinner, a special treat for us mommas to not eat standing up or eating leftover chicken nuggets and mac and cheese,” she said.

Lauren said the best part of the hotel stay was enjoying hot coffee in the morning and laughing and telling stories. “When you are younger and together more, you make memories together often,” she said. “As you get older, if you don’t spend time together and make your friendships important, there are no new funny stories.”

Another mom, Kelsey Beasley, enjoyed a night at The Westin Oaks Houston at The Galleria last year after a long-anticipated weekend away in Fredericksburg had to be cancelled because her son was ill.

Her husband surprised her with her own staycation. She arrived in her room, enjoyed the still silence, and climbed in bed for an uninterrupted nap. Later, a friend met her for dinner and some leisurely shopping around the mall.

In the morning, she took the escalator into The Galleria to pick up her favorite Starbucks drink, iced coffee. She returned to her room to enjoy coffee in bed while waiting for her late checkout.

“As a mom, there is very little time for yourself,” said Kelsey. “Your only ‘free time’ is when your child is sleeping, and that is spent doing all the other things around the house that need to be done.” She said the staycation allowed her to recharge her batteries. “All I needed to worry about was myself. I could do what I want, when I wanted.”