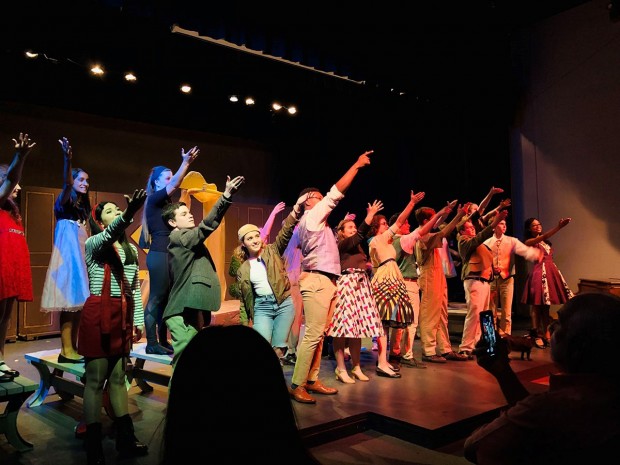 For the first time ever, St. Thomas’ Episcopal Theatre performed Shakespeare’s A Midsummer Night’s Dream with a modern setting of New York City in 1959. The show was a hit with the audience and even helped many students raise their English grade, with extra credit for those students who attended. Lauren Pastorek, the head of the theatre department, and the cast found creative parallels between Shakespeare’s themes of Elizabethan England and the Zeitgeist of 1959. Although many know this story, STE presented it in a fresh, new way.

The story begins at Athens Collegiate Academy, an Upper East side prep school, where the main characters, Hermia, Lysander, Demetrius and Helena attend school in 1959. There are social changes taking place in the background such as racial inequality, women’s rights and fair pay for all workers. The last scene showcased these themes by the cast joining together to fight for what they deserve. The play highlighted many new unconventional themes that go deeper than appear at the first impression of the script. 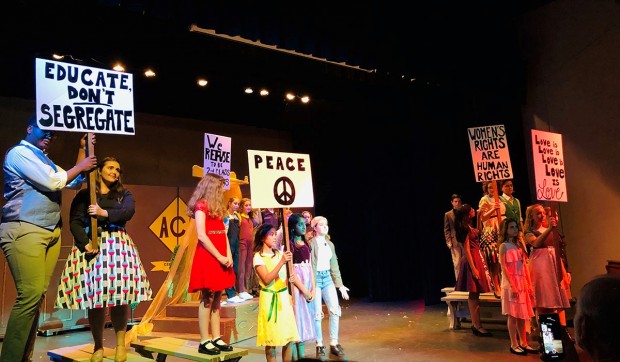 The middle and high school cast gathers together in a fight for the rights they deserve in the final scene of A Midsummer Night’s Dream.

On a lighter note, A Midsummer Night’s Dream was absolutely hilarious with tons of slapstick humor. Some of the funniest characters were Nick Bottom, played by Jackson Barr, and Puck, played by Claire Lane. Claire Lane, a sophomore, has been in six plays and musicals at STE so far. She was especially excited for A Midsummer Night’s Dream because this was her first leading role in a play. What she enjoyed most about the character, Puck, is causing all the mischief in the show. Puck was always causing problems, right and left, between the four lovers. The most challenging part of the show for her was memorizing all the Shakespearean lines. Claire says this play is different than other plays performed at STE because it is Shakespearean and along with the time and effort put into memorizing lines she also had to work on the comedic timing of the show. Claire comments, “I usually spend my five minute break joking around with my castmates. We’re always making jokes and having fun whether it’s on or off stage.” Claire has enjoyed performing in A Midsummer Night’s Dream, and has made many memories with the cast and crew.

So much hard work was put into this exciting and hilarious play; it will definitely be remembered. Thank you to everyone who helped put it together, especially Lauren Pastorek, Ann Seitz, the tech and stage crew and those who helped fundraise.