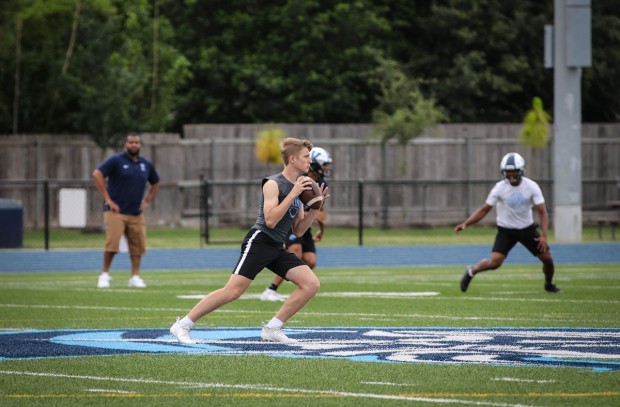 The team in practice and running a play.

On Tuesday, April 16, the Village School Varsity Football team officially started their training for the spring season, in order to develop their skills for the start of the program in the fall.

“Spring football is great because it helps build team chemistry,” team captain junior Garri Smith said. “It transforms our brotherhood to the next level.”

Although it has been only four years since the start of the program, the team has seen huge successes, including making it to the TAPPS Division 5 State Championship for two years now. Players have been recruited into some of the most elite athletic and academic schools. This year, senior Austin Hill signed to the University of Texas at Austin, a Division 1 football team, and received offers from other prestigious universities, including Columbia University, Dartmouth, Davidson College, Florida Tech and Texas Tech. Other player highlights include senior K'shon Thomas who signed with Morehouse College and twins John and Jeremy Sanchez who signed to Arkansas Tech, a major Division 2 team, last year.

“That’s telling us that the program is going in the right direction,” Head Varsity Football Coach Kevon Bagot said. “We’re getting quality guys in, and we’re getting these guys ‘looks’. They’re getting an opportunity to not only keep playing but to be a part of a team and experience growth.”

The coach credits the strength and uniqueness of the program to the diversity of its players. 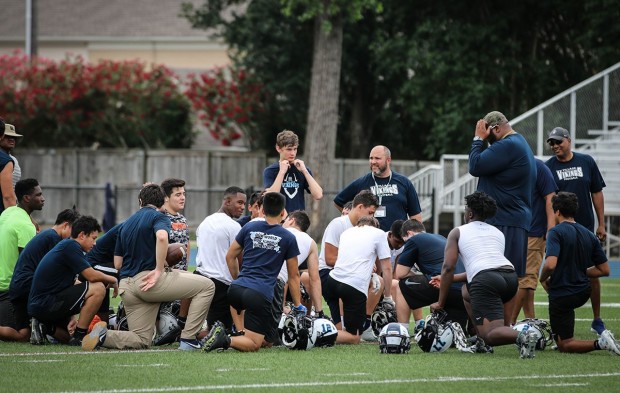 A team huddle after a long practice.

“I think the fact that we not only have to work together as a team but also have to work with players from so many different backgrounds and so many different beliefs, makes us a better team and also teaches us how to really develop relationships with our teammates,” Coach Bagot said. “We really want to know them, and we want to understand who they are. We all want to ultimately work together.”

This spring, the team has seen its largest number of players in the history of the program with over 34 players. The nine coaches on staff have been working diligently to ensure that the players are ready for the start of the program in the fall. The team concluded their spring season by hosting a 7 on 7 end-of-spring game and barbeque on May 3.

“Next year, I see us doing great things,” Coach Bagot said. “We were able to attract the attention of high powered athletes, so they’re looking to join the Village family. [Also] our freshmen that started last year are... going to have a breakout season, I think. They are going to do well, and with all of that, [including] our offensive line being 5 seniors, I think we are going to do great things next year. I think it will really be our year to take control of the season and not just compete for a state championship, but to actually win it.”