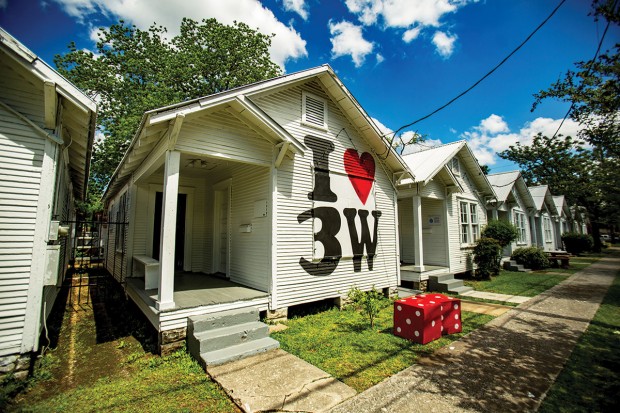 So where in Houston are we exactly?” my dad Atul Salhotra asks from the passenger seat of the car, as he peers out the window reading aloud street names he’s never heard before.

“This is so close to our house!” he continues, shocked that after more than 27 years in Houston, he’s never been to the Third Ward neighborhood, situated about two miles south of BBVA Compass soccer stadium and just west of the University of Houston.

Driving east off 288-N, I drive my dad by Texas Southern University, a historically African-American university, and then I point out the site of the original Frenchy’s Chicken, a local favorite that Beyoncé famously rapped about in her track I Been On.

But my dad is most interested in the neighborhood’s history. When I drive him north on Emancipation Avenue, he notices Emancipation Park, a 10-acre piece of land that stands as the city’s oldest park. In 1872, that lot was purchased by four former slaves for $800.

As soon as I begin sharing the park’s history, my dad wants to know more: “What was the park used for back then? Who owns it now? Is it frequently visited?”

My dad’s a genuinely curious person who is an encyclopedia of information – history, science, you name it, he’ll offer answers. So he seems genuinely surprised that he knows little about this part of Houston. After some research, I explain to him that the park was originally used to celebrate Juneteenth, the anniversary of the day in 1865 when General Gordon Granger arrived in Galveston with the news of the Emancipation Proclamation, ending slavery in the state of Texas. Today, that park is owned by the city, and it’s still the site of Juneteenth celebrations. 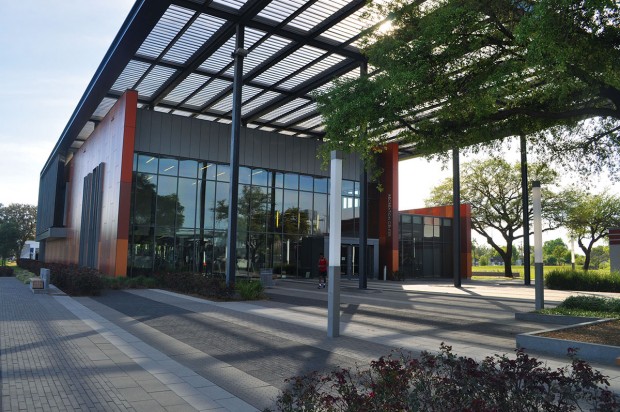 When I think about it, my dad’s reaction is sound. We should be alarmed by our ignorance. There’s something deeply troubling about the fact that it took writing an article about the Third Ward neighborhood for me to learn, for example, that Emancipation Park’s swimming pool housed the only public pool in Houston where black people could legally visit until the 1950s. Apparently living and attending K-12th grade in Houston does not make me any kind of expert on this city’s history.

Thanks to a $33.6 million investment, the park received a facelift and reopened in 2017 – the rec center now is dazzling with long glass windows and rust-colored rectangles arranged in a geometric pattern. My dad, an environmentalist, notices the solar panels flanking the roof. And as an avid gardener, he admires the manicured lawn where the community gathers for movie nights.

For many, these changes to Emancipation Park are symbolic of larger transformations to the community. Once a bustling center of African-American life, a number of forces – including racial integration and, more recently, gentrification – have changed the face of the neighborhood. New investments and housing developments have translated to higher property taxes that many former residents simply cannot afford.

“I think [the Emancipation Park renovation] is positive, but at the same time, when you make that type of investment, you also need to stabilize the community,” says Carl Davis, a lifelong Third Ward resident who leads the Emancipation Economic Development Council (EEDC), a collaboration among faith-based organizations, non-profits, government entities and businesses trying to revitalize the neighborhood while preserving its history.

Carl remembers his childhood in the Third Ward, then a thriving business corridor filled with restaurants, grocery stores, barber shops and pharmacies owned and operated by African-Americans. “We had everything we needed to live and to survive,” he says. 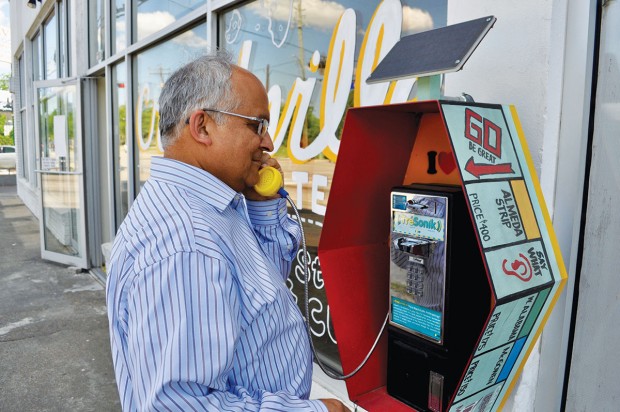 But in the mid ’80s, the neighborhood entered a period of decline. The end of segregation meant Third Ward residents started shopping and frequenting areas outside of their own neighborhood. Growing prosperity motivated wealthy African-Americans to move to suburbs such as Missouri City. And, external forces, such as construction of new freeways like 288, disrupted the community and displaced many residents.

Now, groups like the EEDC are working to preserve the culture, heritage and history of the Third Ward and ensure the safety and prosperity of long-time residents. In doing so, iconic structures have popped up, illuminating the history of the neighborhood.

After showing my dad Emancipation Park, we walk across the street to Crumbville, a locally owned bakery famous for its vegan treats. Outside of Crumbville stands TréSonik, an art-piece part of a larger installation that seeks to highlight the culture of the Third Ward. TréSonik looks like an old payphone, so my dad naturally picks up the phone and starts dialing a number. But you can’t place a phone call from TréSonik – instead, with each button, my dad hears different ambient noises of the neighborhood, recorded by Marc Newsome, also known by his artist name Marc Furi. The sounds include the background noises you would hear at the original Frenchy’s drive-through, the rhythm of TSU’s Ocean of Soul marching band practicing and the sounds of St. Mary’s Catholic Church’s annual gumbo cook-off.

Marc bought a “fixer-upper” house in Third Ward in the early 2000s. The property value has since skyrocketed, and his property taxes have gone with it. Even so, Marc is a proud Third Ward resident. When I meet him, he dons an “I heart 3W” T-shirt he designed himself, and he’s quick to rattle off a list of gems in the Third Ward. There are restaurants like the Turkey Leg Hut, which Marc describes as “what it would be like if the rodeo has a restaurant,” and Alfreda’s Soul Food, which Ella Russell, founder of Crumbville, likens to “if your grandma and all her sisters opened up a restaurant.” 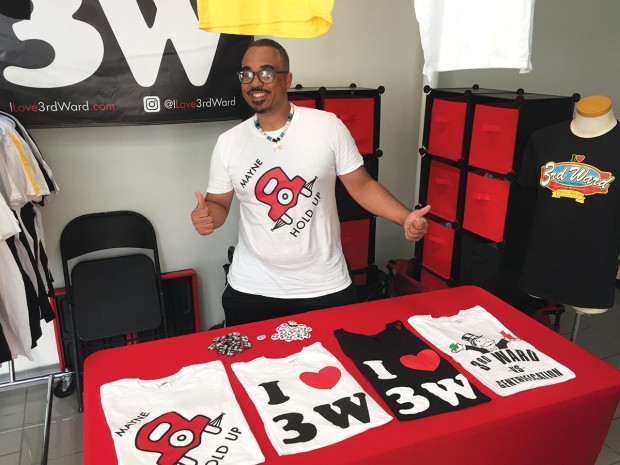 Artist and Third Ward native Marc Furi sells his T-shirts at a pop-up at the Houston Museum of African American Culture. (Photo courtesy of Marc Furi)

My dad and I drive down Almeda Road, and he points out the new high-rise developments along the way. Alfreda’s Soul Food, which opened in 1964, is one of the few older establishments still around. A year-old mural outside the restaurant features national African-American heroes including Dr. Martin Luther King, President Barack Obama, Michelle Obama and pianist Duke Ellington, and it also highlights local heroes, including Houston-born civil rights leader Barbara Jordan and artist John Biggers, who served as the chair of the art department at TSU.

“The Almeda strip was initially owned by African-Americans,” said Victor Gaddie, who painted the mural. “We wanted to preserve some sense of history and convey that to those that would be passing by. Ultimately, that should never be forgotten.”

Residents aren’t the only ones who have recognized the need to preserve the community’s culture. Earlier this year, Preservation Texas recognized Houston’s Emancipation Freedom Colonies – which includes the Third Ward neighborhood along with the Fourth and Fifth Wards – as one of the six “most endangered places” in the state. 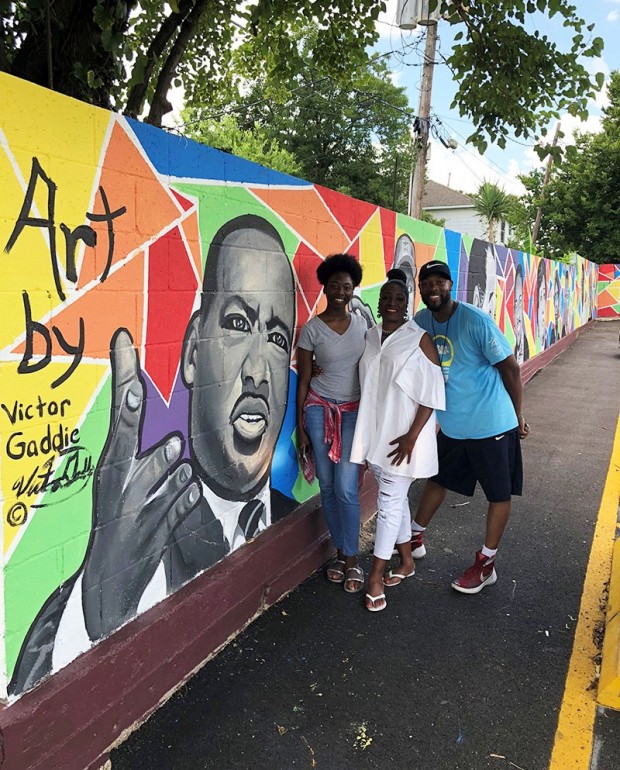 The announcement notes that this area has “suffered in recent decades from extensive demolition, architecturally inappropriate redevelopment and gentrification,” and it calls for “action to protect and preserve the fragile historic resources that remain, including modest residential structures, brick streets, commercial buildings and sacred places.”

Ultimately, it’s perhaps inevitable that any neighborhood will change with time. But what cannot be forgotten is the neighborhood’s history, or the people who influenced it.

“This is a family-oriented community,” Carl said. “Families still live here who I grew up with.” “It’s a fun place to be. You have the opportunity to experience the culture, and it was at the forefront of the Civil Rights Movement too. A lot of great things happened in the Third Ward.”

Editor’s note: This article is the second of a three-part series exploring different parts of Houston. Next up: the Greater Heights.

3:30 pm to 4:30 pm
Location:
The Church of St. John the Divine
END_OF_DOCUMENT_TOKEN_TO_BE_REPLACED