Getting Out to Serve: Amaanah Volunteers ‘Rock the Block’ 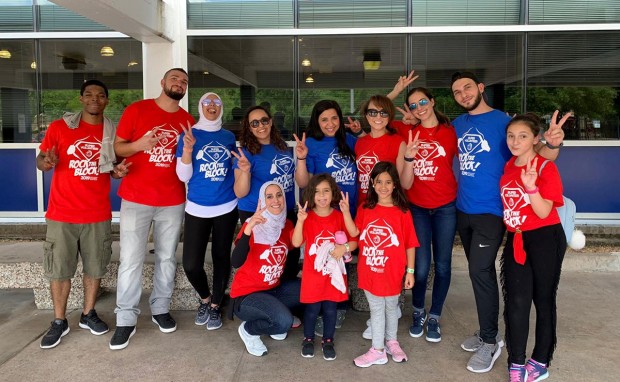 It’s 11 a.m., and the cafeteria at Sutton Elementary School is bustling. But the noise isn’t coming from school kids on their lunch hour, it’s from the more than 200 volunteers packing grocery bags to deliver to refugees throughout the Houston community.

These volunteers had all signed up to participate in Rock the Block, an annual volunteer event hosted by refugee service organization Amaanah, a nonprofit that helps integrate resettled refugees. Volunteers as young as five arrived at Sutton Elementary on Saturday, May 25 ready to serve. A truckload of grocery items from Fiesta arrived on campus, and quickly, an assembly line formed, with volunteers passing non-perishables such as pasta, rice and lentils between hands. These items were spread across tables in the cafeteria and ultimately were packaged into green and blue sacks to be delivered to about 300 refugee families.

“When we open up the registration for this event, it’s usually full with volunteers within a couple of minutes,” said Abid Yousuf, a Bellaire resident who serves on the board of Amaanah. “There’s a lot of excitement and enthusiasm around it. It can be easy to write a check and move on, but this event really involves hands on work with the community.”

In past years, the food items for distribution were secured through a combination of in-kind donations from local grocery stores, plus support from partner organizations. This year, though, the organizations that had contributed before had other commitments, and Amaanah did not receive significant in-kind donations, Abid said. In order to raise money to procure grocery items, volunteers were asked to donate $50 per person when they signed up to participate.

“It’s kind of double duty — not only are the volunteers coming and working, but they are also paying to provide that support,” said Abid.

But for many volunteers, paying that extra $50 was a no-brainer. “People want to be a part of the experience and the greater good,” said Swati Narayan, a Bellaire resident who recently joined the Amaanah team as a consultant. 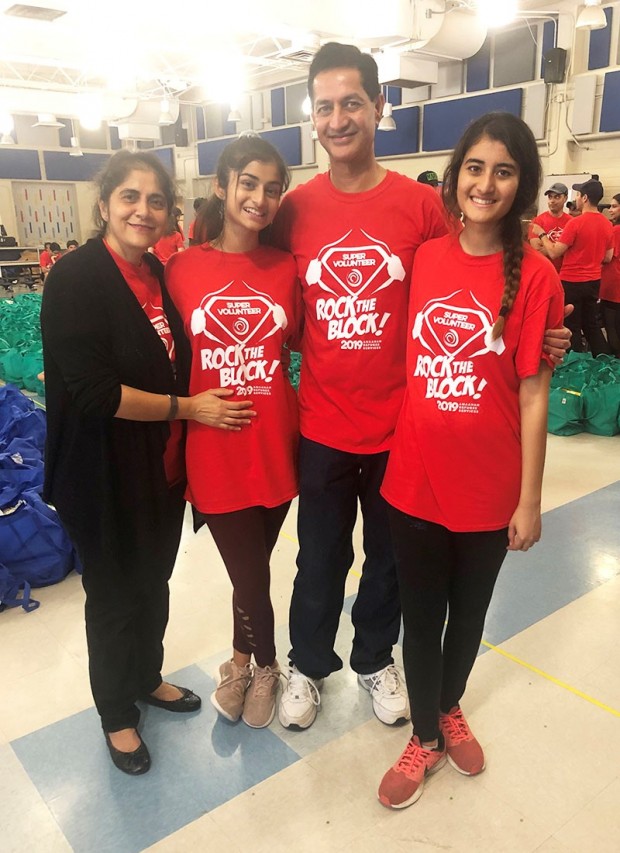 Participating in Rock the Block has become an annual family activity for some neighbors. Bellaire resident Manar Ansari, for example, has been an Amaanah volunteer, along with her younger sister and her parents, for as long as she can remember. When she first started volunteering as a young girl, Manar could barely lift the bags of rice and containers of cooking oil. Now, the recent St. John’s School graduate proudly participates in the assembly line, picking up food items off the pallet and getting them to the appropriate bags.

Manar says her favorite part of the day is always distributing the food to refugee families. She recalls that last year, a mother invited her and her family into her home and Manar spent time playing with her three young kids. “She didn’t want to leave the house,” chimes in Gazala Ansari, Manar’s mother.

Manar also appreciates the opportunity to see how people outside of her immediate circle of friends in Houston live.

“It’s a waking-up to reality,” Manar says. “It’s different from the houses that my family and our family friends live in; you have whole families living in small apartments that often aren’t in the best areas.” 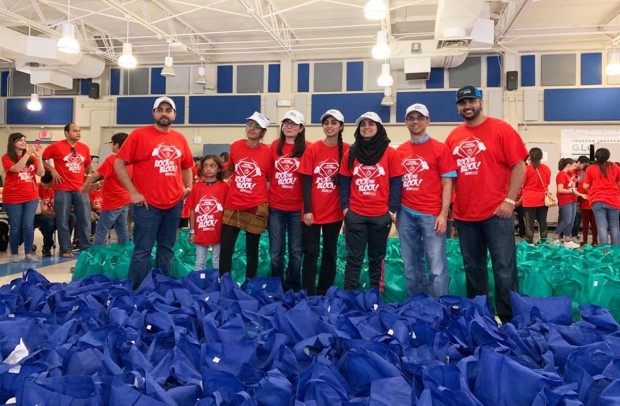 Grocery items were packed into green and blue sacks to be delivered to refugee families. (Photo courtesy of Amaanah CEO Jida Nabulsi)

Amaanah was created 11 years ago by a group of students at the University of Houston, though it has since expanded to serving refugees across Texas. Board member Nazif Sharique said that resettlement organizations in Houston often connect Amaanah with refugees from the Middle East, because Amaanah has a number of Arabic translators on staff and has a history of working with refugees from that part of the world. But the organization is open to all refugees, and Rock the Block serves everyone who needs the support.

“At the end of the day, the underlying message is, we have an influx of refugees who are a part of our fabric and part of our community,” Nazif said. “Our goal is to make them successful so they can contribute to the city of Houston and the greater good. It’s a simple message.”

Editor’s Note: Amaanah is currently accepting applications for a variety of opportunities. See the website to find out more about how to get involved.