How much screen time is too much? 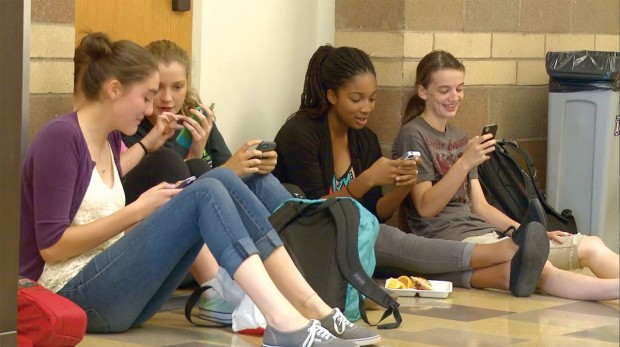 SCREEN TIME According to a report by Common Sense Media, American teenagers (13 to 18) average about 6.5 hours of screen time per day, excluding time spent on schoolwork. (Photo courtesy of Screenagers Movie)

Like many of us, rising eighth grader Trevor Casey is addicted to his phone. He says so himself, and though he sees this as somewhat problematic, he says it’s simply the reality of life as a teenager in 2019.

“You just get used to it,” Trevor said nonchalantly while clutching his Samsung Galaxy. “You’re just always on it, all the time.”

This dismal reality was given life in Screenagers, a 2016 documentary about what it’s like to grow up in the digital age (and it will be explored further in a sequel slated to come out in October 2019). The film presents statistics on young Americans screen use – 13 to 18 year olds are on screens an average of 6.5 hours a day, excluding screen time for schoolwork. The irony of learning about the downsides of screen time while watching a screen was not lost on the film’s directors, who decided to limit the documentary’s release. Instead of watching the movie privately on your personal laptop, viewers can watch it only at organized events in group settings. So far, 32 screenings have taken place in Houston, at schools, religious centers and even companies such as law firm Baker Botts LLP.

Trevor, 13, attended a Houston screening in March with his mom, Kathy Casey, a financial specialist at Eaton Corporation. Leaving the screening at St. John the Divine Episcopal Church, Kathy was pleased to hear experts offering parenting tools like creating a contract regulating a child’s phone use, having open discussions about social media and restricting phone use after bedtime. “It made me happy to think maybe we’re doing some things right,” Kathy said.

Trevor, meanwhile, couldn’t help but laugh at how relatable the scenes were. He felt sympathetic towards the 12 year old who disagreed with her mother’s phone rules. And in a scene showing a teenager delete an Instagram photo because she was embarrassed by how few “likes” it accumulated, he thought of his classmates who do the same.

“You have to look like you have fun outside of school,” said Trevor, who received his first phone the summer before seventh grade. “You have to feel important and make your life seem interesting. It’s kind of not good, but people do it anyway.”

Trevor, like many, feels the constant push and pull of technology. On the one hand, he enjoys using social media to connect with friends instantaneously. On the other, he says he and his classmates use their phones too much. He sometimes finds himself texting friends who are sitting in the same room. “I honestly don’t know why we do it,” he said. 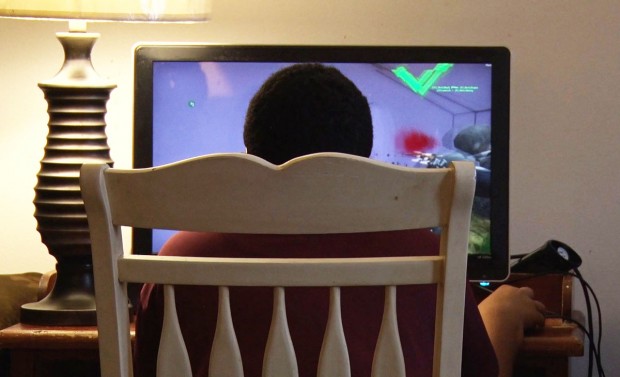 According to a 2015 study by the Pew Research Center, 72 percent of teens play video games (including on a game console, cell phone or computer). (Photo courtesy of Screenagers Movie)

Trevor also knows that platforms such as Instagram can have downsides. Recently, Trevor posted on his private Instagram “story”– a feature that allows users to post videos and photos that vanish after 24 hours. Trevor restricts access to his story so that only four of his classmates who he’s designated as “close friends” can see it.

On his story, he posted that he “liked” a person from his school. Though Trevor thought he could trust his friends to keep this to themselves, someone in the group took a screenshot of the post, and within seconds, something he meant to share with four friends was all over the school. Classmates were posting it to their personal Snapchat stories, and even the school principal reached out to see if he was okay. “I guess people thought I wouldn’t see it because I don’t have Snapchat,” he said. “But I have friends on it, so I’d of course find out about it.” 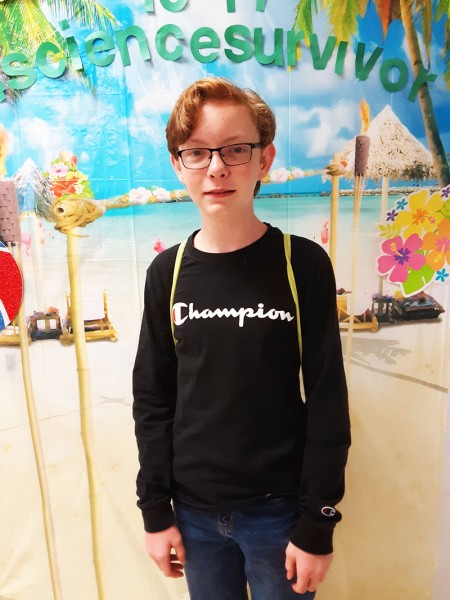 Thirteen-year-old Trevor Casey got his first cell phone during the summer of 2018. He continues to work with his parents to set rules limiting how much screen time he can have every day.

Kathy is grateful that Trevor felt comfortable sharing this situation with her and that he’s learned from it to be more careful about what he posts, even privately. Trevor’s Instagram page features few photos of himself – Kathy tells him to avoid posting anything too personal. Instead, his contains funny memes, photos of celebrities that he edits using the app Facetune, along with screenshots of album covers he likes.

Kathy monitors Trevor’s phone use, and she restricts him from using Snapchat, a photo messaging app where photos disappear (but, in reality, can be saved). Using an app called Secure Teen, she can ensure Trevor can’t access apps after a certain time, and she can also monitor his text exchanges. “From a parent perspective, you can’t just put your head in the sand and say it’s not what it is. They have a full-fledged computer in their hands. I would encourage parents to be more engaged,” Kathy said.

Screenagers brought up another way parents can stay engaged: by modeling appropriate phone behavior, whether that’s not using phones during dinner, or setting aside screen-free time with their kids. “Whatever rules are decided, the parents need to abide by them,” said Christi Megow, a parent who organized two Houston Screenagers events.

After each of these screenings, Christi moderated a discussion using questions provided by the Screenagers film team. Young children were the first to voice their opinions, Christi recalled. Some students commented, “I don’t like it when my parents don’t pay attention to me during a meal because they are busy looking at their phones.” Others said they weren’t so sure they even wanted a cell phone after seeing just how addicting they can be, Christi said.

Lovett Elementary student Ellie Boynton, 11, saw the film and grew weary of video games. The film highlighted a teenager named Andrew, who became so addicted to video games that his health suffered. He had to leave his first semester of college in order to attend rehab at ReStart, a center dedicated to helping people recover from behavioral addictions such as internet and videogame addiction.  “I didn’t know that anyone could be that addicted to screens,” Ellie said. “After the movie, I kind of thought maybe I should spend more time with my family.”

What parents might find most alarming is the effect that children’s screen use can have on their future success. Scientists have known for decades that self-control, not intelligence, is the greatest predictor of a child’s ultimate success in life. In the famous “Marshmallow Test” from the 1960s, psychologist Walter Mischel correlated children’s self-control – measured by their ability to forego an immediate reward (one marshmallow) for a larger future reward (two marshmallows) – with success on standardized tests.

Devices like cell phones, the movie suggests, have qualities that make them addictive, precluding kids from developing the willpower and self-control that seems to correlate with achievement. 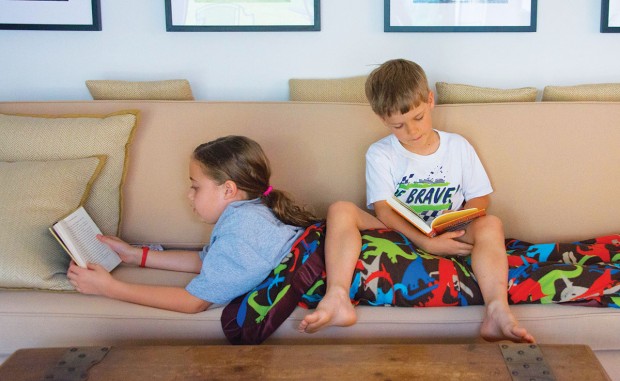 HOW ABOUT A BOOK? Christi Megow encourages her kids – Grace and Matthew – to read instead of always choosing electronics. (Photo: Christi Megow)

“When you give kids a device that can be addictive, you’re basically sabotaging their success,” Christi said.

The average age that a child gets a cell phone is 10.3 years old, according to recent surveys. Christi’s kids, ages 9 and 7, have not gotten their own phones yet, but she was interested in the film in order to prepare herself for the day they do. Already, Christi has witnessed adverse behavioral effects from television time, and she encourages her kids to read and play outside.

“One of my kids has ADHD, and I’ve noticed that when I let them watch a TV show and then I turn it off, all hell breaks loose. That’s not a behavior that I enjoy, and if it’s something I can prevent, I will,” she says.

Of course, there are plenty of advantages to screens too. Using iPads and tablets as educational tools can promote learning – some kids who struggle to learn to read using books fare better on screens, studies show. Apps such as Skype and FaceTime allow kids to connect with grandparents or other family members who are far away. And even video games, when they promote problem-solving or physical activity, can yield cognitive benefits.

And even if parents worry about their kids’ screen time, many feel safer knowing their child has a cell phone. Kathy uses an app called My360 that lets her see where Trevor is at any time. When the bus drops him home from school, she receives a notification, giving her peace of mind that he reached home safely. And since she and her husband leave the house before he gets on the bus, she’s happy the app informs her that Trevor woke up in time and made it on the bus.

Between the dangers of internet addiction on one side, and the potential benefits they confer on the other, it’s ultimately about finding a balance. “I honestly think it’s different for each child,” Christi said. “The movie doesn’t dissuade people from buying a smartphone. The director wants you to come to your own conclusions.”

Editor’s note: Join us for a special free screening of “Screenagers,” followed by a discussion about growing up in the digital age, at our Back to School Buzz Night at Studio Movie Grill City Centre Thurs., Aug. 8, at 7:30 p.m. For details and to RSVP, click here.