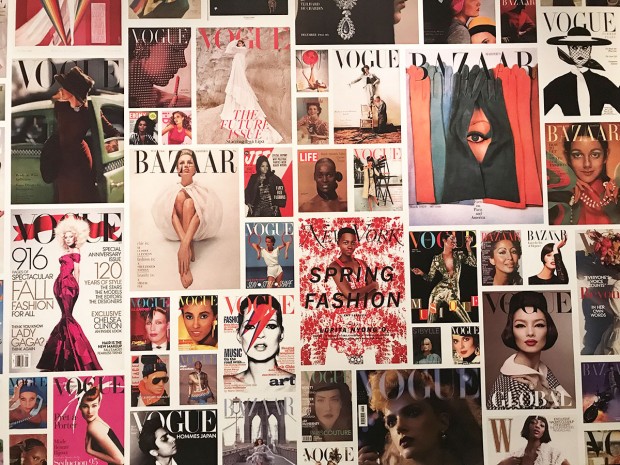 The beginning of the “Icons of Style: A Century of Fashion Photography” exhibit at MFAH features a wall of magazine covers with recognizable photography. (Photo: Haley Kurisky)

The Museum of Fine Arts, Houston's latest exhibit, “Icons of Style: A Century of Fashion Photography” is a homage to fashion photographers. The exhibit focuses on noted photographers and their recognizable photos, often from famous magazine covers, including Vogue and Harper’s Bazaar.

Walking the viewer through several different sections and eras of fashion photography, the exhibit explores such movements as “Black is Beautiful!”, “Surrealism,” “Elegance,” and “Street Style.” My favorite section was the music section (big surprise), which looks at the intersection between musical icons and fashion. The exhibit details how social movements influenced fashion designers and the fashion community, who often drew inspiration from minority groups, or “street style.” 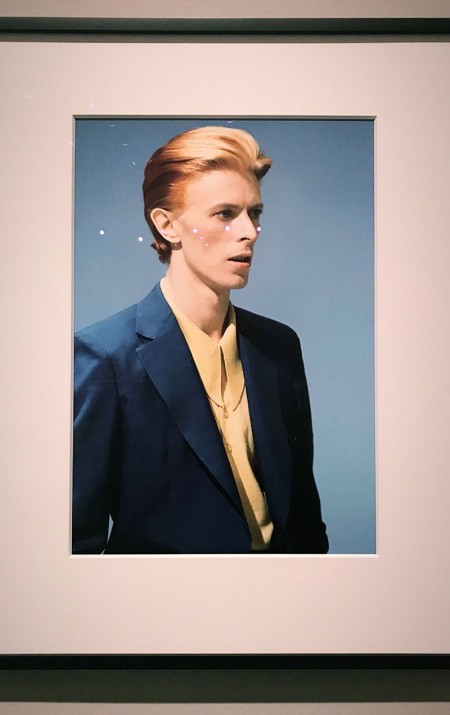 Who is more fashion-forward than David Bowie? His inclusion in the exhibit was one of Haley's favorite parts, even if his fashion in the photo was more subdued than his usual style. (Photo: Haley Kurisky)

You will recognize many of the photographs but being able to see the pictures in context with other photos from the era along with background details makes each picture that much deeper and detailed. The photos come from a variety of sources; most are famous pictures from magazine covers, but others are advertisements or purely for fun and artistic purposes. The accompanying captions for the photos explain the photographer’s style and how the photo was taken

Even if you’re not a photography buff, the explanations are easy to understand and are quite enlightening. Part of the intrigue of the exhibit is getting to understand how each photographer used different skills to create illusions within the photos. One picture in particular is stuck in my mind: The models were laying down on a black backdrop, but the photographer arranged their clothing and the angle of the camera to make it seem that the models were moving upright throughout the air instead of laying still. 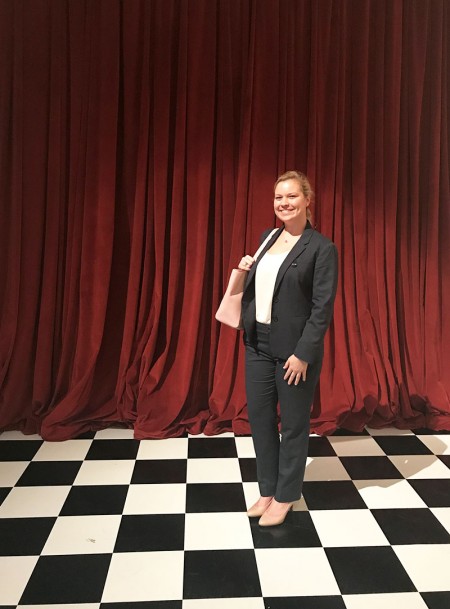 At the end of the exhibit, viewers can create their own iconic fashion photo against a backdrop. Pictured here is the writer in her own fashionable, courtroom-ready work outfit.

And in case you need something a little more three-dimensional than a photo, the exhibit also includes various dresses and outfits from the various time periods mentioned within the exhibit. The outfits include pieces from celebrated designers like Yves St. Laurent, among others.

At the end, there is even an opportunity for exhibit-goers to create their own fashion photograph. A black and white-checked floor and a red curtain await all Instagrammers waiting to share their fashion pictures with the world - there is even a nearby monitor that shows all pictures taken at the exhibit that tagged the museum. You, too, can be a part of the fashion photography!

If you love beautiful clothing, photography, fashion or history, this exhibit will interest you. I learned so much about photography to make me really appreciate the behind-the-scenes work that goes into creating what we think are simple magazine covers but are really works of art. The exhibit runs until Sept. 22.

See all articles by Haley, including her monthly concent roundups, here. 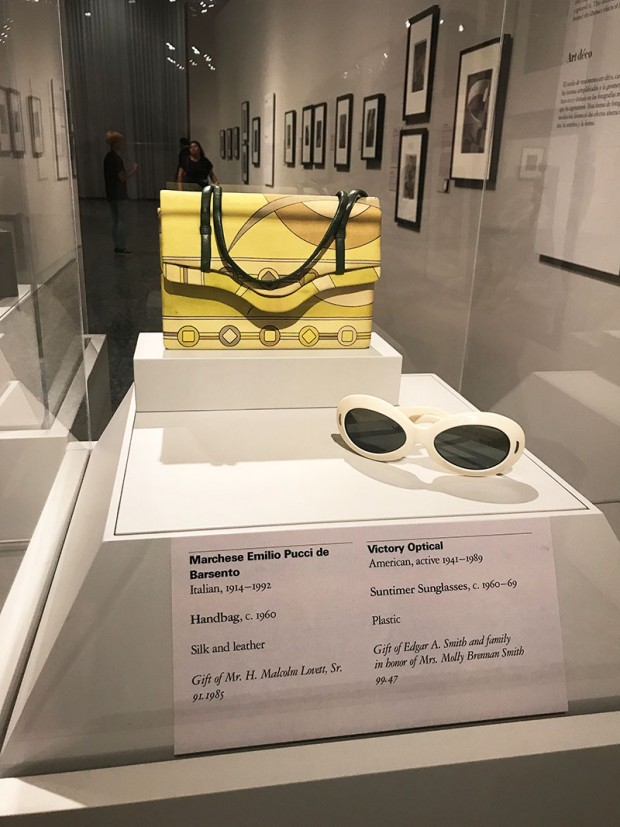 A few accessories were featured throughout the exhibit, including bags, sunglasses, hats, and shoes. Here, visitors see sunglasses typical of 1960s fashion as well as a handbag made in Italy in 1960. (Photo: Haley Kurisky) 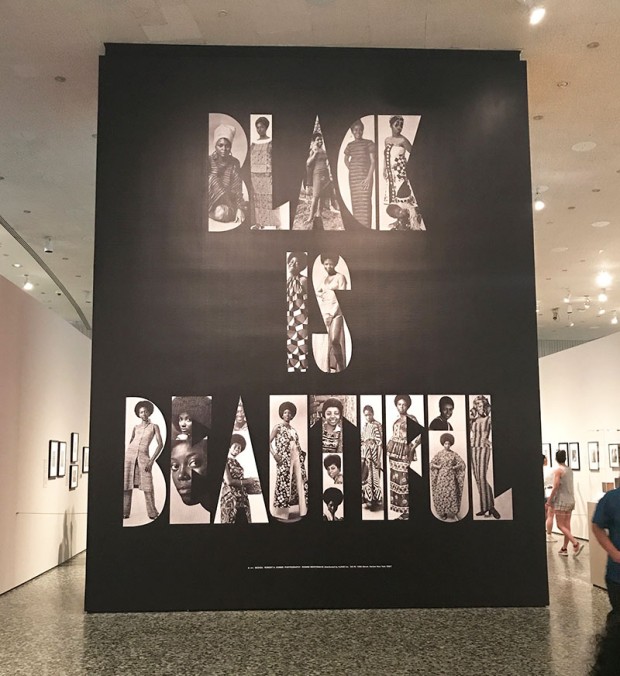 One of the sections of the exhibit was called “Black is Beautiful”— a tribute to the movement calling on more African American representation in fashion and photography. (Photo: Haley Kurisky)

Centered around iconic magazine covers, the “Icons of Style” exhibit charts fashion through the lenses of noted photographers. The exhibit challenges the viewer to look at pictures such as a Vogue magazine cover as more than just a magazine cover- it’s an artistic expression that within itself gives away information about the photographer, the subject, and society at the time the photo was captured. (Photo: Haley Kurisky) 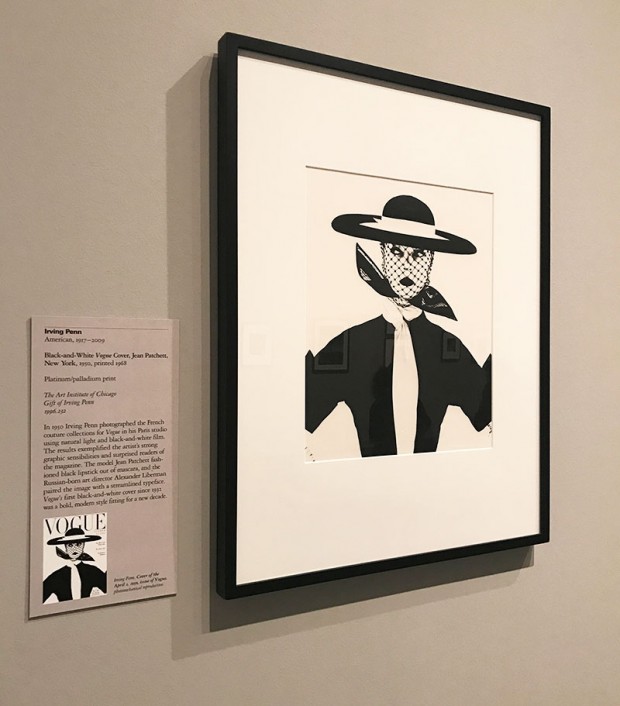 Many of the photos were accompanied with an informative and helpful explanation describing the circumstance of the photo as well as the photographer and his technique. (Photo: Haley Kurisky)