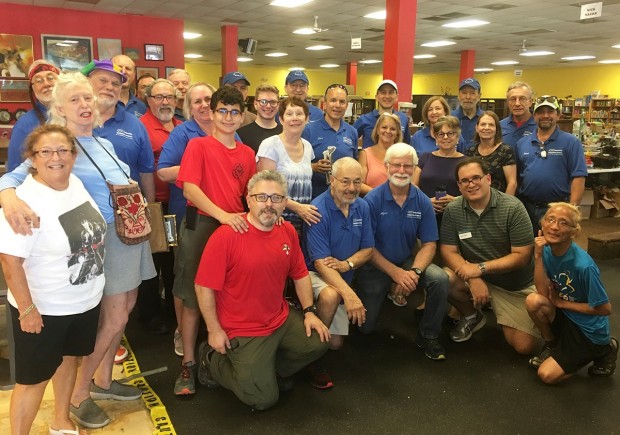 The Emanu El Brotherhood Garage Sale is powered entirely by volunteers and benefits a variety of Houston charities.

For more than 20 years, Steve, a retired architect and facility manager who managed ConocoPhillips’ world headquarters, has been the “face” of the synagogue’s charity garage sale, coordinating logistics and item collections all over the city. Proceeds support a variety of needs – a homeless family center, scholarships for summer camp programs, an inner-city cub scout program.

But Steve’s involvement with Emanu El didn’t start with the garage sale. “I walked into Sunday school [at Emanu El] in 1967, when I was in the tenth grade, and for the first time in my life was noticing girls,” Steve says. “There was this girl in a psychedelic pink dress that first day, and I figured out how to ask her out, and we’re still married today.” Robbie, Steve’s wife, grew up in Memorial, while Steve lived in Meyerland. Today, the couple dotes on three small grandchildren.

When asked how he got so deeply involved in the garage sale, Steve says it’s simple: “I organize a bicycling training series for the BP MS-150, training 1,800 of my best friends to ride from Houston to Austin, and I used to organize the PTA Purim carnival for the school.” His talent got noticed, and he was tapped to organize the garage sale. “I don’t know how I had time to do all of this before I retired, but I’m a professional organizer now.

“I get to work with a lot of people and make us more effective volunteers,” he says. “I’ve created a little app that runs on my phone and computer so that when people call [to donate to the garage sale], I can organize the pickups and volunteers.”

Volunteers consist of a core group of 25 to 30 people who spend Saturdays during the summer picking up people’s larger cast-offs – furniture, for example – as well as others who pick up smaller donations during the week. “They are doctors, lawyers, accountants, engineers hauling away junk,” Steve says. He maps out where the homes donating items will be, and he schedules the volunteers to tackle neighborhoods together, in order to keep the project running efficiently.

“Clothing, electronics, furniture – as long as it’s in good condition we’re interested,” Steve says of the donations his crew picks up. “We’re collecting a mixture of trash and treasure, and we let the customers decide what’s trash and what’s treasure. We had this big, pink poodle lamp a couple of years ago. I certainly didn’t think that looked like treasure, but we opened the doors, and three minutes later a young man was first in line. Boy, he wanted that lamp. You just don’t know what’s going to be what. If it’s in good condition, somebody’s going to be interested.”

Weingarten Realty donates a space for the sale each year, at very little cost to the synagogue. “We move in for a few months, set up tables for the little things, and leave an open area for furniture,” Steve says.

As soon as the sale is over, volunteers begin boxing and labeling unsold items to be picked up by predetermined nonprofit agencies around town. “They tell us in advance the kind of things they need, and they’ll come out and load up the leftovers,” Steve says.

Sometimes, donated items never make it to the sale. “Some of the things we collect will go right to the [nonprofit] agencies,” Steve says, “because it’s efficient for us to collect it all over town and bring it to them.”

When asked what his favorite part of the garage sale is, Steve says he has three. “At the beginning it’s great, because we get a whole bunch of men and women together – even though it’s Brotherhood, our volunteer team is about 40 percent women – and a lot of these people I don’t see until the summer. We catch up, have a great time and on Saturdays we end the day with a lunch to visit.

“The next part that’s great is we go out to these people’s homes, swarm their house with our volunteers, and take everything they’ve collected out of their house. People feel this sense of relief that we’ve taken everything away. Occasionally, you go to a home where maybe they’re older and they really need someone to help clean up the home and get things out. We do that, and when we leave everybody feels so good.

“The final thing is the garage sale itself. The doors open, and a lot of the first people in line are flea market people who make a living that way, and we’re helping them do that. Then we have a lot of families who need to get things at affordable prices. I make sure everybody understands when you’ve got a family in there, you make sure they can afford to buy whatever it is. And then they’ve got kids, and you include toys, and it’s just incredible. It’s fun seeing people carry the stuff out to their cars. The payback I get in terms of the hugs from the people and the looks on their faces is so much more than the time I’ve invested.”

Steve adds, “There are a lot of little mitzvahs [good deeds] happening. We give the structure to make it happen.”

This year’s Congregation Emanu El Brotherhood Garage Sale – the Gigantic Garage Sale, as it’s advertised, will be Sunday, Aug. 11 and Sunday, Aug. 18, at 7549 Westheimer. To volunteer or donate, email Steve at [email protected].