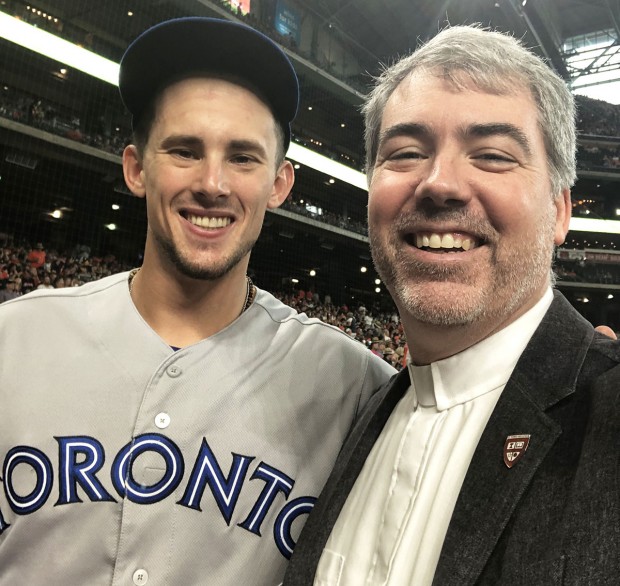 When St. Thomas High School President James “Jim” Murphy got the call from the Houston Astros inviting him to come on up to the big leagues to sing the national anthem at a Blue Jays game last month, he jumped at the chance. To get ready, he first warmed up his vocal chords, second, double checked he still knew the lyrics and finally, headed to Minute Maid Park.

Father Murphy wasn’t the only one who had dreamed of standing on Major League Baseball turf. After graduating from St. Thomas High School in 2013, baseball standout Cavan Biggio — the youngest son of Astros’ legendary Hall of Famer Craig Biggio — headed north to hit the baseball diamond for the Notre Dame Mighty Fighting Irish. In 2016, he was drafted by the Toronto Blue Jays, and, over the next three years, worked hard to move up the ranks with lots of stops along the way including a menagerie of farm teams: the Vancouver Canadians, Lansing Lugnuts, Dunedin Blue Jays, New Hampshire Fisher Cats and the Buffalo Bisons. Then, on May 24, 2019 Cavan got his big league call up to the Toronto Blue Jays.

Almost as awesome as a grand slam, Cavan was thrilled that the Jays’ upcoming schedule included a road series against the Astros. Cavan looked forward to seeing family and friends and getting his H-Town fix. 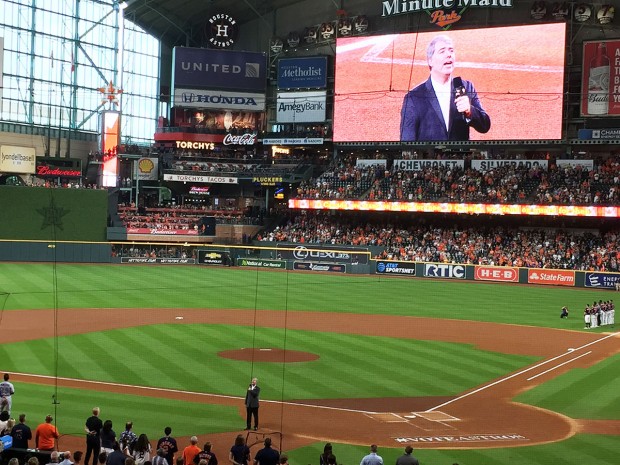 Since the Toronto Blue Jays are based in Canada, in addition to playing “The Star Spangled Banner,” Jays MLB pregame ceremonies include the national anthem of Canada, “O Canada.”

If you’re in Texas and you need some one to sing “The Stars at Night are Big and Bright…Deep in the Heart of Texas,” we are there for you, heck we’ll even throw in the claps for free. But need someone to sing the Canadian Anthem? You’ll probably have better luck finding some Canadian bacon.

Luckily, Cavan and his dad, Craig, knew just the person to suggest for the job: STH’s very own, Father Murphy.

During Cavan and his older brother, Conor’s high school days, Father Murphy often sang the national anthem before home baseball games, including while Craig was the STH baseball coach. So the Biggio family knew Father Murphy had a decent set a pipes on him.

Father Murphy is also a big sports fan. “Growing up I played soccer, basketball and a little baseball, but I was terrible,” he said. His high school years included soccer, volleyball, track and field. Then cross country for a year at St. John Fisher College. But at this point in his life, he’s happy to stick to singing. “God knows it’s the only thing I can contribute to a sporting event anymore,” he said.

Murphy grew up in Boston but studied Theology at the University of Toronto and lived in Canada for a decade, so he knows the tune and lyrics to “O Canada.”

He also had experience, as he had been honored to sing the American national anthem at Minute Maid Park back in August 2015 for another Biggio family special occasion - the night the Astros celebrated Craig's induction to the Baseball Hall of Fame. The ballpark was bursting at the seams with over 40,000 fans in attendance to celebrate #7.

Regarding the thousands of people listening to Father Murphy sing the national anthem in front of a large crowd, Father Murphy shared, “I tried to not think about how many people were listening to me sing so I wouldn’t mess up the words. I was singing and words were coming out of my mouth, but in my head I kept thinking, ‘Wow, there really are a lot of people here!’”

Having another Biggio on the field made the experience memorable for Father Murphy. “Singing for the Blue Jays game with Cavan down on the field was extra special. Cavan is a very fine person,” Father Murphy said.

Numerous STH students, alumni and friends of Cavan’s were in the stands to cheer on their hometown boy. Also spotted was the proud Biggio family: Along with Craig was big brother Conor, who was supporting his little brother by wearing a Toronto jersey on top while staying loyal to Houston with an Astros jersey underneath. Mom Patty and little sister Quinn were decked out in specially-made baseball jerseys sewn together with half of an Astros uniform and half of a Blue Jays uniform. 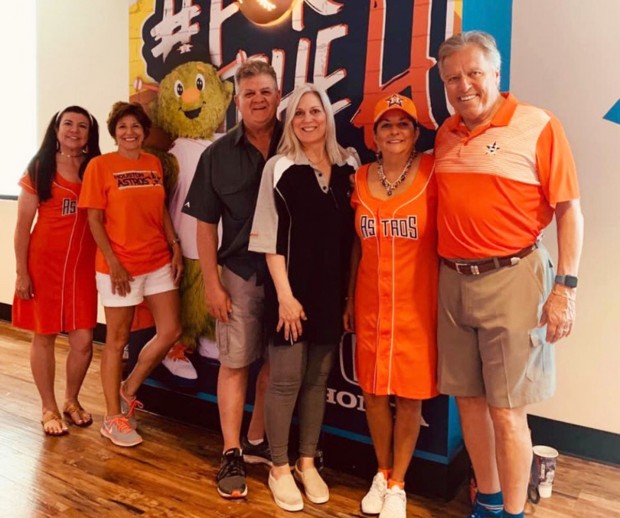 St. Thomas High School mom Alma Connor and her friends had a great time cheering on the Astros. Alma was excited to see Father Murphy sing before the game and happy that she was able to capture the performance on her phone. Her fun cheering section included (from left) Helen Garza, Alma Connor, Ron and Rose Flores and Melinda and Michael Wilhelm.

Alma Connor, mother of STH student Daniel Irr, was in the crowd and captured Father Murphy’s performance on video.

“We had just found our seats when all of a sudden I heard them announce the Canadian anthem and heard Father Murphy’s name,” Alma explained. “Sure enough, he popped into view on the Jumbotron so I switched my phone to video!”

It was a great night. Cavan got his dream of playing in Minute Maid Park where he hung out as a kid, and Father Murphy’s singing performance went viral. The home team ended the game with a win, and the night was a winning combination for both Cavan and Father Murphy, a pair of swinging and singing St. Thomas High School Eagles legends.

Editor’s Note: The Astros have another three-game series this weekend. Check their full season schedule here.