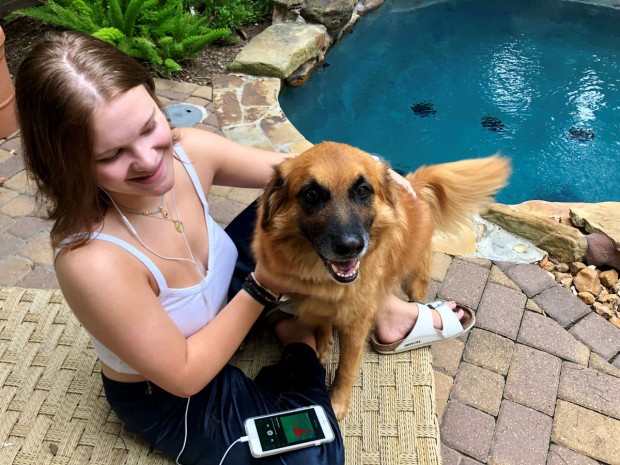 Gloria Gardner and her dog Satchmo enjoy sitting by the pool and listening to music on a hot summer day. (Photo: Grace Goddard)

Imagine this. It’s a warm summer day, and you’re sunbathing by the pool with your friends. There’s ice-cold lemonade on the table beside you, and a book, waiting to be read, in your arms. Sounds like a perfect day, right? There’s only one thing missing: music. To craft the ultimate summer playlist, we asked Buzz residents for their favorite summer songs, new and old.

When talking about her favorite summer songs, West U resident Lynne Goddard said, “They take you back to a place and time. You can almost smell the suntan lotion and hear the waves crashing.” Memorial resident Frances Boatwright, a fellow Buzz summer intern, said, “Pop and country music always put me in a good mood for the summer.”

Whether you're hanging out by the pool, driving to a fun destination or just relaxing at home, these eclectic and evergreen tunes are sure to put you in a brighter mood this summer. See the list below for our picks. Plus, we’ve created a Spotify Playlist so you can have all of these songs in one place. Note: All explicit songs listed have been marked with an asterisk.

We’d love to hear your favorite summer songs, too. Comment below.