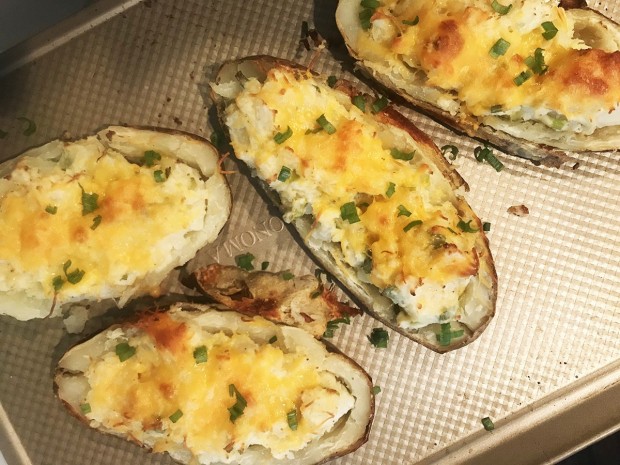 Cheesy Twice Baked Potatoes are worth turning on the oven in the summer.

Sometimes you’ve got to break the mold. That’s what Twice Baked Potatoes did at our house last week.

Number one, I know it’s summer, and I join you in your aversion to turning on the oven. In fact, I am probably the last one who wants to turn it on (believe this, because last week the AC in our kitchen conked out for a few days, and I don’t think I’ve cooled off yet). It’s hot, and we all want cold food – salads, fruit, ice cream, popsicles.

Number two, we don’t eat a ton of baked potatoes anymore, which is a shame, because it used to be that if everyone in my family were somehow out for dinner and I was alone, I’d make a baked potato. That was my own little solitary comfort food, perfect because it was just the right size for one and didn’t require much prep. Just a little time in the oven and a scoop of cottage cheese, a little parmesan, some chives and salt and pepper. Yum.

So why, then, am I talking about making Twice Baked Potatoes? It goes back to breaking the mold. For the past week, our summer mold has been pretty well broken because my older daughter has been home with a terribly sore throat. Which leaves us having a good number of dinners at home, because she’s spending a lot more time in bed, and leaves me thinking a lot about what I can make for dinner that will be soft (but won’t be rejected, either by her or by the healthy daughter). Sometimes genius strikes, and I have to say that Twice Baked Potatoes was a brilliant – and much-welcomed – thought.

Because even though these potatoes are warm and stemmed from a need for soft food, they’re crazy delicious. We had them as dinner, but they’d be great with barbecue or grilled steaks or chicken, regardless of the temperature outside – I don’t think you’ll ever hear a complaint. They’re worth breaking your own mold. And turning on the oven.

Preheat the oven to 400 degrees. Wash and dry the potatoes (make sure they’re really dry so that the skins get crispy) and pierce each a few times with the tines of a fork or the tip of a knife. Rub the potatoes with a little bit of olive oil, just enough to coat the skins, and sprinkle all around with salt and pepper. Place the potatoes on a sheet pan and bake for 1 hour. Remove the potatoes and turn the oven down to 350 degrees.

Cut the potatoes in half lengthwise, and set them aside to cool. Place the butter, sour cream and cheeses (save a little of the cheddar to use as topping) in a medium bowl. When the potatoes are cool enough to handle, scoop out the insides, leaving an edge around the skin of about ¼ inch, and add them to the bowl. Place the shells back on the sheet pan. Use a fork to gently mash the potatoes, then stir everything together, folding in the green onions (save a few to sprinkle on top after baking). Do not overstir, just be sure the potatoes are fluffy and the other ingredients are incorporated throughout. Season to taste with salt and fresh ground pepper, then mound equal amounts of the potato mixture back into the four shells, again keeping the potatoes fluffy (meaning don’t mash them down).

Top with a sprinkle of cheddar cheese, and bake again for 20 minutes or until the edges and tops start to brown. Garnish with the green onions.

P.S. These are great with bacon. Just cook two strips, crumble them into the bowl when you add the green onions, and mix them in.