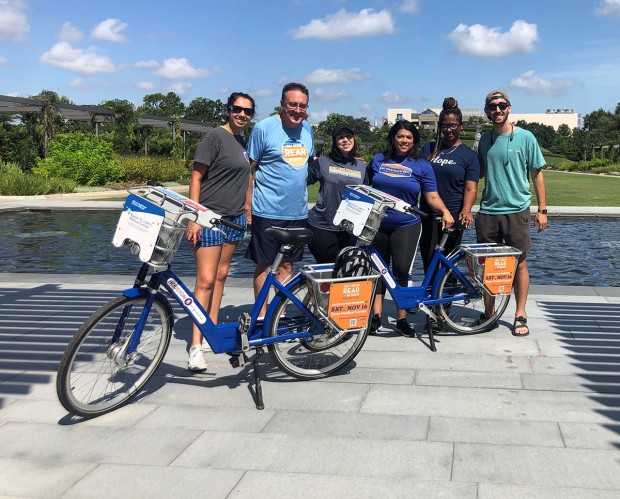 Six years ago, Jay Burgess’ life was changed forever when, at 48 years old, he was diagnosed with colon cancer.

“I had been complaining of abdominal pain for almost a year,” says Jay, who lives in Braes Heights and works as an internet marketer. “It was pretty severe, but then it would just go away.”

Jay’s doctor interpreted the pain as gas or an intestinal issue. But when the discomfort persisted, Jay made an appointment with a different doctor, who immediately recommended he get a colonoscopy. Colonoscopies are generally recommended for adults age 50 and above, so, at 48, Jay had never gotten one. The colonoscopy revealed stage 3B colon cancer that had spread to some of Jay’s lymph nodes.

“They basically caught it just in time,” Jay says. “We did chemotherapy for six months just to be safe and make sure that if anything got into the bloodstream, that would knock it out.”

Now cancer free, Jay is helping promote a social media challenge that aims to increase awareness of colon cancer. The “Houston BCycle Challenge” is a partnership between urban bike share program Houston BCycle as well as the Colon Cancer Coalition and their annual 5K race promoting colorectal cancer awareness and screening, Get Your Rear Into Gear. Recent research finds that although colorectal cancer death rates have decreased overall between 1970 and 2016, there has been a 51 percent increase in rates of the cancer among those under age 50. The Houston BCycle Challenge, therefore, seeks to emphasize the importance of early screening. 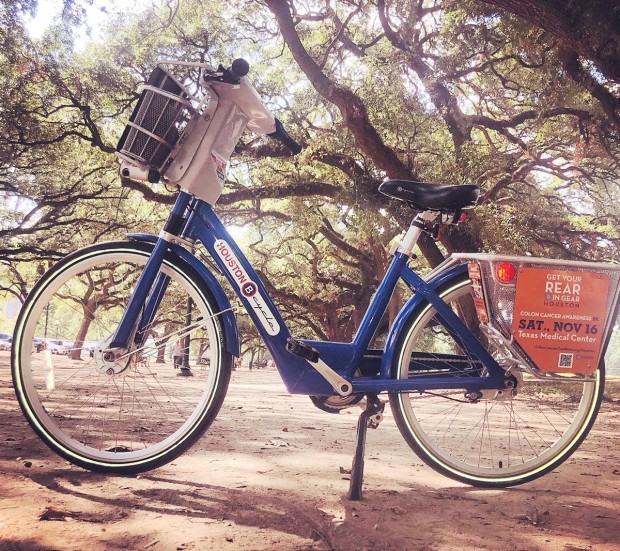 “Colon cancer is very curable as long as you catch it early enough,” Jay said.  “[The Houston BCycle Challenge] is about getting our name out there in front of a younger demographic and making them realize, if you’re feeling any kind of pain, or symptoms that could possibly be colon related, you need to get it checked out as early as possible.”

The challenge was initiated by colon cancer survivor Allison Rosen, a fierce advocate who serves as project lead at Baylor College of Medicine. Allison was walking in Rice Village a few months ago when she noticed two powder pink bikes. They stood out among a sea of red and grey bicycles at a Houston BCycle station. When Allison approached the bikes, she noticed placards on them, advertising the Susan G. Komen foundation for breast cancer.

“I saw it and thought, we have to do this for colorectal cancer,” Allison said.

Allison wasted no time. Within a week, she had set up a meeting with Henry Morris of Houston BCycle, finding a way to partner with them to turn two bikes blue, the color representing colorectal cancer. Last month, the bikes were painted blue, and this month, the social media campaign kicks off. 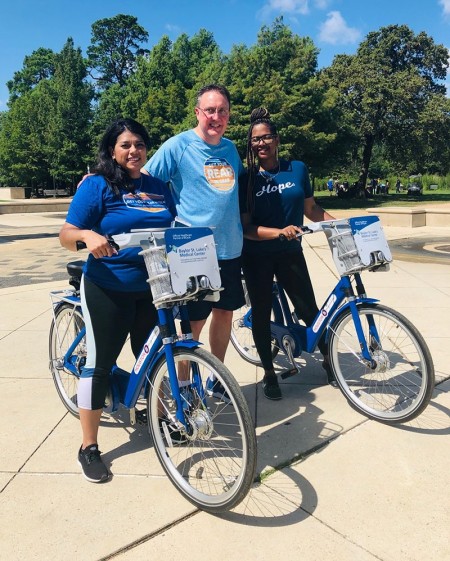 The campaign challenges bikers to find and ride one of the two blue bikes, take a picture with it and post the photo on social media with the hashtag #BlueforCRC. Each month leading up to November, winners will be selected for a prize that includes a free monthlong pass for Houston BCycle plus free entry for the Nov. 16 Get Your Rear in Gear race, co-chaired by Jay Burgess and his wife Lisa along with Allison.

Houston BCycle expects the campaign to make an impact, helping young people learn about colon cancer. Henry says “unicorn bikes” – those painted in a non-traditional color – get ridden more than twice as often as the standard bikes.

“People see these brightly colored bikes and they’re attracted to them at the station,” he says.

Abby Fernandez, who manages marketing and outreach for Houston BCycle, added that she’s already learned more about colon cancer just by working on the campaign.

“When we did a photoshoot with survivors, it brought up awareness just for myself,” she said. “It’ll definitely bring the question to people of getting checked up and screened.”