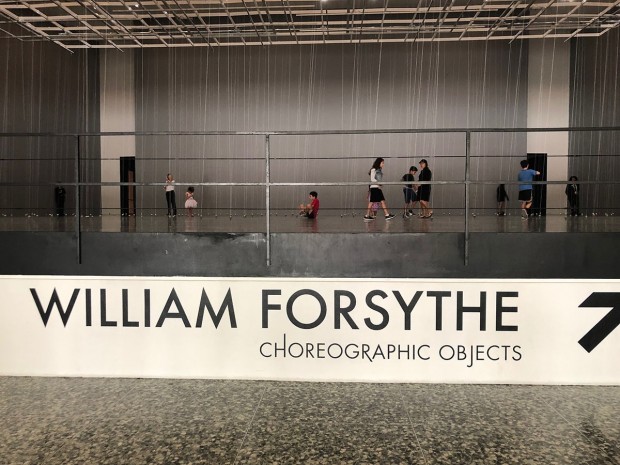 The entrance to Forsythe’s second part of Choreographic Objects: Nowhere and Everywhere at the Same Time.

This exhibit, created by one of the most significant choreographers of our time, William Forsythe, illustrates how people move through space and time. His goal was to have people explore the principles of choreography. There are two parts to the exhibit: City of Abstracts and Nowhere and Everywhere at the Same Time. 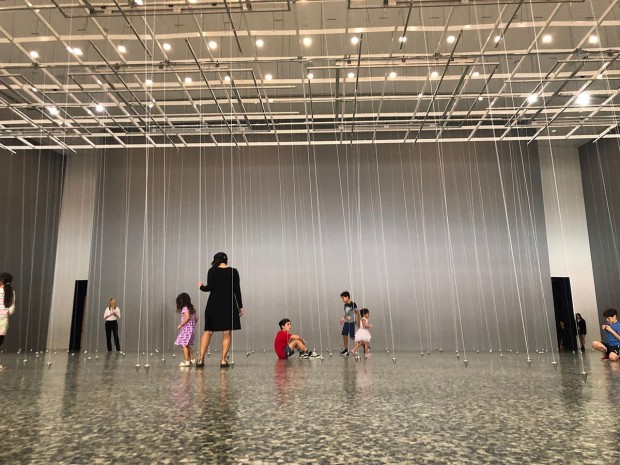 Children wander through and even sit in the middle of the swinging pendulums in an attempt to not get hit.

As soon as you walk into the museum, you are fascinated by the giant screen that is acting like a mirror and capturing patron’s every move. The screen, which is connected to a video camera, films people as they move around. When you stand in front of the screen, however, your body will begin to warp into different shapes. The camera reacts to every action you make, so as you walk, for example your legs, and later your entire body, will become all squiggly and wavy.  Forsythe likely intended for this screen to become an interactive experience for patrons, in which they can explore the different shapes their bodies make in a certain space.

Nowhere and Everywhere at the Same Time:

This part of the exhibit is essentially a bunch of strings hanging down from the ceiling. Attached at the bottom of each string is a tiny three-dimensional silver cone. The tiny pendulums all swing as one simultaneous unit, so kids attempt to sit in the middle of the strings and not be touched by them. It’s clear that as you move through the pendulums, you are doing exactly as Forsythe intended: you are combining your steps with space and time. For example, you try to time your movements perfectly, so that you’re not hit by the pendulums. You find yourself almost dancing around the strings so as to not be hit by them. 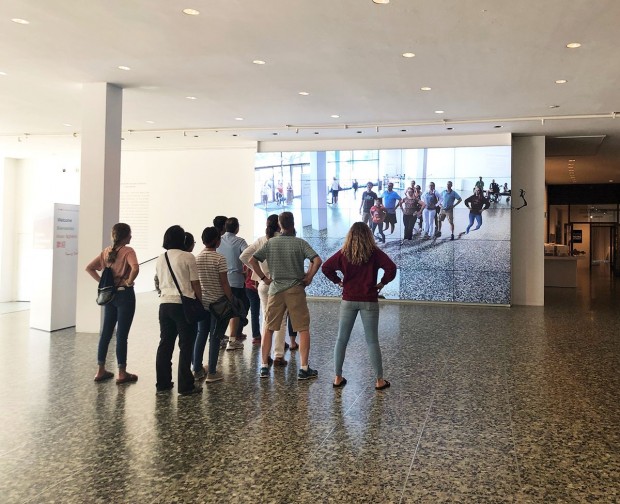 A group of visitors take part in Forsythe’s City of Abstracts by standing in front of the video screen.

As a dancer myself, I thought this exhibit was well thought out by Forsythe. He successfully achieved his choreographer’s goal of allowing people to move through space and time (two very important elements when dancing) without even realizing you are doing so. I also believe that this showcase was very amusing and interactive for visitors of all ages.

If you wish to visit the exhibit, you need to purchase tickets, but tickets can be purchased online or at the admission desk when you arrive. Children under 12 must be accompanied by an adult and you should check your belongings before entering.