With The Favorite Foursome 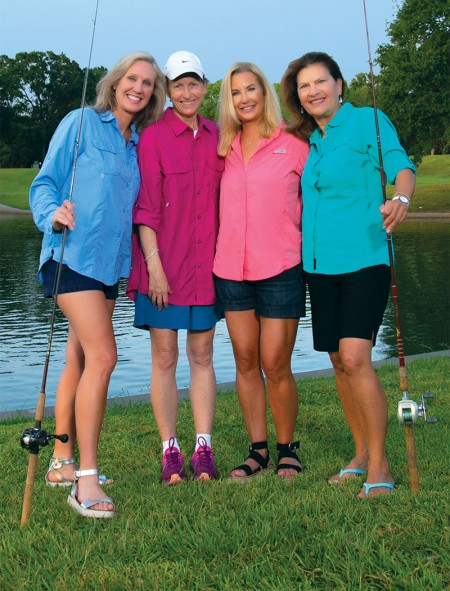 This is not a fish story. But it is a story about fish. And fishing. And about how four friends have taken their friendship to a new level: hook, line and sinker.

Sometimes a quartet of friends is so tight that their text message group is given a proper name. That’s what happened to Christy Galtney, Margaret Kitchen, Pam Lewis and Cindy Soefer. They are from opposite ends of the globe and have children all over the map – yet none of that matters to them.

“We really genuinely like each other,” says Pam. “We all bring different things to the table with our different backgrounds and being in different times in our lives.”

They range in age from 53 to 65 and did not know each other well until a few years ago – but they all had one thing in common: tennis.

All four play at the highest (open) level of tennis in the Houston Ladies Tennis Association.

They all knew of Margaret, who is from South Africa and was recruited to play tennis for The University of Houston. She was a nationally ranked All-American who played on the professional circuit. In high school, Christy had been in the Texas rankings. Cindy started playing at 5 and played varsity in high school, while Pam never picked up a racket until 22 years ago when she started taking lessons.

One day, Pam organized a doubles match at The Downtown Club at The Met. The four connected and decided to quadruple up and play regularly at the club, on its indoor tennis courts. Something clicked, and their lives have become woven together like the strings on a racket.

“We played doubles every week, and we rotated partners,” says Pam. “We all kept saying how much we looked forward to the morning we would be together and we almost always sat for an hour or so after the match to drink hot tea and talk.” In a short time, the mornings stretched into lunches and dinners, and the friendship grew. Texting their plans became a daily thing, so it seemed natural to name their group chat.

“After playing tennis, one of us would always say: ‘This is my favorite group,’” says Pam. “So we decided to call ourselves ‘The Favorite Foursome.’” 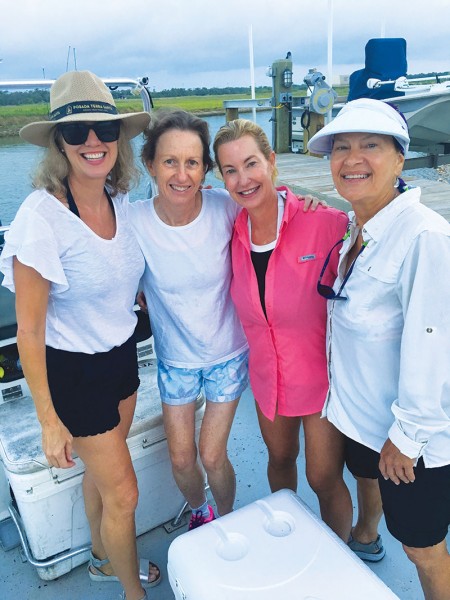 Cindy, who owns a house in Rockport and is a longtime fisherwoman, had the idea of introducing her competitive, tennis-playing pals to fishing. “We all found each other, and we just like each other a lot,” she says. "It is a safe relationship built on mutual respect, and they are all special friends. I love exposing women to fishing.”

Cindy was born and raised in Corpus Christi. “I grew up fishing and crabbing with my parents every Sunday. That was my happy place,” she says.

A job brought Cindy to Houston as a young adult, and days spent on piers and boats went on the back burner. She was busy as a buyer for Foley’s, raising three daughters and then running husband Ron Soefer’s podiatry office. About 20 years ago, Cindy’s good friend, Gloria Tenenbown, invited her to Rockport with rods and reels.

“And that rekindled my love of fishing,” she says with a smile. “As you grow older, you try and recapture your happy places and experiences, and that is where I am these days,” she says. “My parents have been gone a long time, but to be out on the water, it is peaceful, and it is a time to reflect and remember those times with my parents and my siblings. It is a harkening back.”

And it’s also a going forward, which is why Cindy has started bringing The Favorite Foursome on girls-only fishing trips. “I don’t think women realize how much they would love fishing if they have not done it,” she says. “But once you do it, you are hooked forever. Fishing is liberating. I am all about woman empowerment, and I think fishing is part of that because it gives you confidence that you can do anything you want. You can go to any cocktail party any day of the week, and you can talk fishing with everyone. Men’s eyes get so big: You fish?! they will say. Then I ask them: What’s your favorite rod and reel? It always brings me such pleasure.” 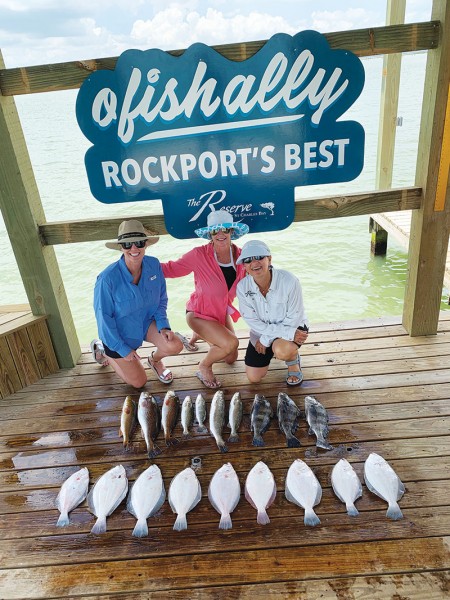 The transition from a tennis court to a fishing boat was fast for the foursome. “When you go fishing with tennis girls it’s on!” laughs Christy, a homemaking mom whose husband Matt is an insurance executive. “Who can get the biggest fish? We are all super competitive, and it’s really fun to have another competition we can all engage in.” Their recent trip to Rockport had them competing for who could catch the largest fish during the day to who could win the most dominoes games at night. They reeled in redfish, trout, drum, catfish and needlefish. Their guide caught flounder. When Cindy fishes with guests, she always hires a guide and a boat so they experience fishing from a boat.

“I caught the biggest redfish,” Christy says with a broad smile. “And I caught the biggest drum,” laughs Pam, who is retired from a career in medical sales and whose husband Jim is also retired. Cindy hooked the biggest trout. Margaret did not win a biggest-fish award this time out, but there will always be another fishing trip. “Fishing is fun,” says Margaret, a homemaking mom from South Africa whose husband Ben is a retired investor, adding that the group is planning a fishing trip to Italy next summer. “We all want to go fishing in Sicily.”

In Rockport, the group sets sail early, with a 6:15 am departure on a bay boat. “We fish in Aransas Bay, Copano Bay and St. Charles Bay,” says Pam. “It is really beautiful and peaceful, with lots of deer, birds, alligators and fish.” They spend about six hours out on the water, waiting for the bobbers to signal a fish on the line. “The connection is a competitiveness with yourself and the fish and also just about enjoying the environment,” says Cindy, who also enjoys pier, canal and dock fishing. “It’s really the whole experience. It is the excitement of hooking the fish and bringing it up.” Cindy uses a bait caster and not a spinning reel, and she fishes with live shrimp and cut mullet. When she fishes with live bait, she uses bobbers. When she fishes with dead bait, she casts instead. She and her guests use bobbers most of the time.

Before setting out, everyone has to obtain a Texas fishing license, either per day or an annual one. When fish are not the right size, based on the state rules, they release them. Legal ones get brought back in the boat. “We take our fish home and clean them and cook them,” says Christy. “I just use a skillet and olive oil, garlic and salt and pepper. It’s very simple to cook and they taste so much better fresh! I did not have any leftovers!” Pam goes the oven route and bakes her fish. “We bake them with olive oil, lemon, garlic and rosemary,” says Pam. “I bake the fish at 375 degrees for 20 minutes, and it tastes very fresh and mild.”

Cindy cleans her own fish (“I can clean a trout in less than three minutes,” she proudly says), cooks fish twice a week and lately has been making homemade ceviche with her catch. “When we go out with a guide, they clean our fish,” says Cindy. “But when I fish in the canals or the piers, I do the cleaning myself.” 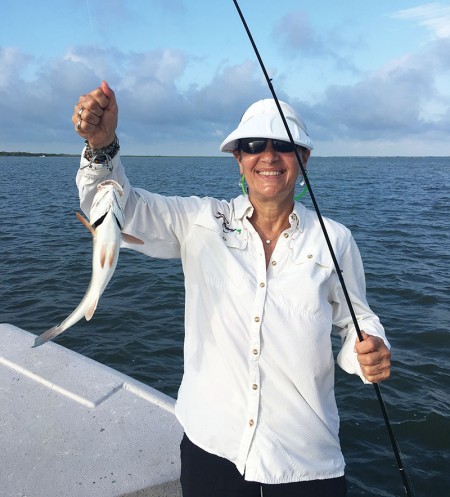 Cindy Soefer caught and released this redfish in Rockport.

Fishing, it seems, is about more than just catching a fish. “The best part is that you are off the grid and are forced to have great conversations,” says Christy. “It is the friendship that is so important.”

Margaret agrees. “I have never been a fan of a group of girls, so this is a first for me,” she says of the foursome’s friendship. “I have usually hung around with foreign girls, and I have not had that many American friends. They are Texans, and I am from South Africa. They drink wine, and I do not. They talk about makeup and shoes, and I am not into fashion at all. But I fit the piece to the puzzle, and they cannot live without me.” Which is true, they all say. They can’t. “I feel like we are all mitzvahs in each other’s lives,” says Cindy.

The foursome, who continue to play tennis every Tuesday, are thrilled they have added regular fishing gigs to their repertoire. Turns out, the thread that binds them together is now also made of fishing line. 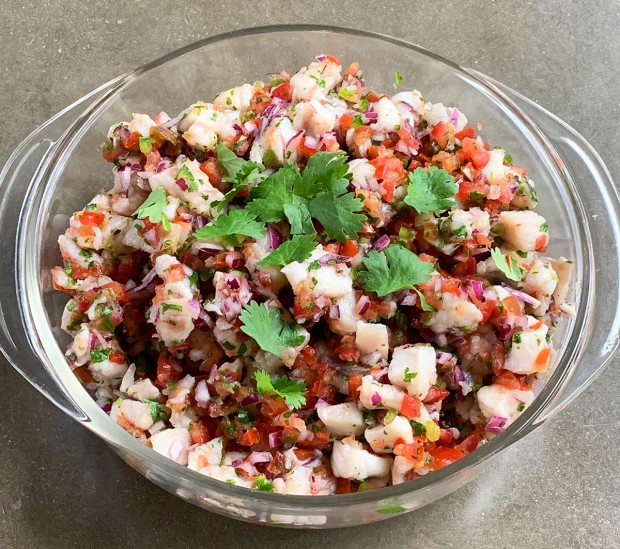 HOMEMADE Cindy Soefer uses fish that she catches to make a flavorful and refreshing ceviche.

I take whatever fish I catch and cube it and place in a dish. I then put enough lime juice to cover it and have it fully submerged. I cover the dish and refrigerate overnight. The next day, I drain the lime juice and put the cubes on paper towels and pat dry and set aside. In a bowl, I mix the onion, tomato, jalapeño and cilantro and mix up until it looks like a pico de gallo. Then I add the fish cubes and toss with a teaspoon of olive oil, juice from the orange and salt and pepper to taste. Serve chilled with slices of avocado and tortilla chips.