Making your own pizza 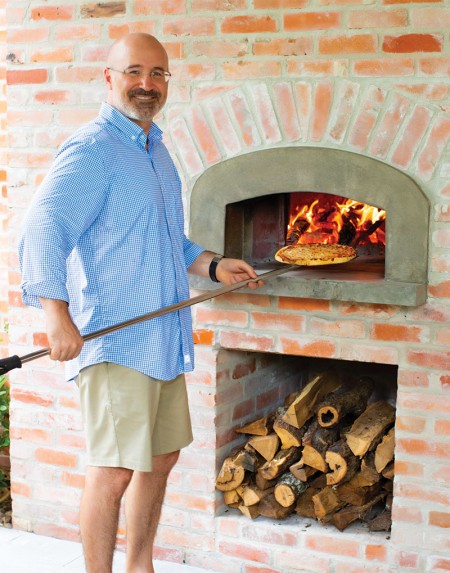 Topped with pepperoni, peppers or pineapple, pizzas are perennial favorites. And while most people get their pies via delivery to their houses or seated at a restaurant, there are some Buzz residents who have the recipe for la dolce vita: by baking pizzas at home.

“It’s the boat analogy for me,” says Niko Lorenzatos with a broad smile, surveying his backyard. “Some people really love owning a boat and dream about boating on a weekend. But I don’t want to have a boat. This pizza oven is what I want.”

Niko says his love of cooking was influenced by his family. “My mom and dad are both from Greece, and my brother and I are first-generation Americans. Every summer growing up we spent two or three months in Greece, and food is a big part of who we are there. It seemed like a natural thing to have a pizza oven.”

A home-renovation project three years ago set the stage for Niko, general counsel at Oasis Petroleum, and wife Jenny to create a space for that oven. “We were wondering what life would be like at home with a couple of teenagers,” he says. Their son Luke is now 17, and daughter Rebecca is now 14. “We entertain at home a lot, and I wanted a grill with a seating area around a pool.” The pizza oven was a natural extension of his new, casual, outdoor kitchen. He settled on the Italian Mugnaini brand of pizza oven that was bricked into an outside wall and made to appear seamless with the house.

Niko next set his sights on learning how to make the pizza dough. “My mom’s advice on cooking was if you have good ingredients your food will taste good,” he says. “I use good flour, water, salt and yeast and good olive oil, and it’s pretty hard to go wrong.” Niko follows the recipe from the Mugnaini website to create his dough. “I make the dough in the afternoon and place it in a proofing box [a large, plastic box with a cover, where the dough rests and rises] for three hours. Then about an hour and a half before we want to eat the pizza, I go outside and turn on an Astros game and start lighting fire – who doesn’t like doing that? I use oak, and the oven gets to over 1,000 degrees.”

While the oven heats up, Jenny, Luke and Rebecca pitch in with pizza prep (“Rebecca rolls out the best dough in the family,” Niko says) and stocking up on the toppings, both savory and sweet. “We make dessert pizzas with Nutella and marshmallows as well as ones that are like a churro with butter, cinnamon and sugar,” enthuses Rebecca.

They line their kitchen counter with everything from sausage to mushrooms and have people top their own pizzas. Once topped, Niko takes over, placing the pizzas in the outdoor pizza oven.  It takes under 2 minutes for the pies to be baked and then the eating begins. “We eat them as they come out of the oven,” says Jenny. “Niko loves to cook. He has that Greek cooking soul.” 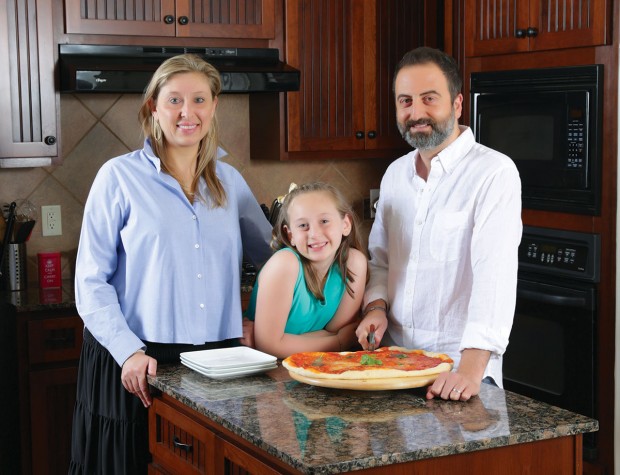 Giovanna and Guglielmo Andreoli make their own dough and bake pizzas in their kitchen oven every Sunday night, passing on their Italian heritage to daughter Giulia. (Photo: lawellphoto.com)

Pizza is one of the ways they continue their traditions. “My husband has a traditional southern Italian family,” says Giovanna, director of finance at Rice University’s Baker Institute for Public Policy. “He remembers his grandma with the apron cooking all the time, and it has evolved as a memory that we are passing down to our daughter.”

Guglielmo prepares the pizza dough, and then the trio tops the pizzas together. “Italian cooking is not complex, and we are mindful of using high quality ingredients,” she says. “My husband does not use a mixer for the dough – he uses his hands for just very basic Italian cooking.” They buy DeLallo Type 00 flour at Whole Foods Market. “The flour is silky soft and super refined, and when you mix it with the water and yeast, it’s soft like silk, and this is the secret to Italian pizza,” she says. “He will make the dough in the morning, and the dough is covered with a dish towel at room temperature because I feel like it rises better at room temperature.” The dough takes hours to rise, so when Guglielmo makes it Sunday morning, it is ready to bake by dinner time.

For their Sunday night dinners, the family has their pizza prep down to a science. “We use a round pizza dish that is perforated at the bottom,” she says. “Guglielmo is very good at stretching out the dough, and he does not use a rolling pin. He sprinkles some olive oil on it, and then you spread some homemade marinara on the raw pizza dough.” They bake the pizzas in their kitchen oven, set at 450. “We bake it with just tomato sauce for four minutes,” she says. “Then we take out the pizza, add the cheese and put back in the oven for two or three more minutes. We use fresh mozzarella cheese that comes in balls. We slice it and put it on the pizza. When it cooks, you just see circles on the pizza – it’s delicious!” Sometimes, they add fresh basil to the pizzas right before eating.

“When Giulia has her friends over, I take a regular log shaped mozzarella and grate it, and when the cheese melts the kids love it,” she says. “Whole Foods Market sells a Genoa uncured salami with no nitrates that the kids love too because it is salty. Sometimes we make a vegetarian one with only mozzarella and broccolini – it’s so good!

“In Houston, we can replicate true Italian pizza that makes us feel not so far from home. The homemade baked pizza crust is a perfect balance of chewy and crispy.” 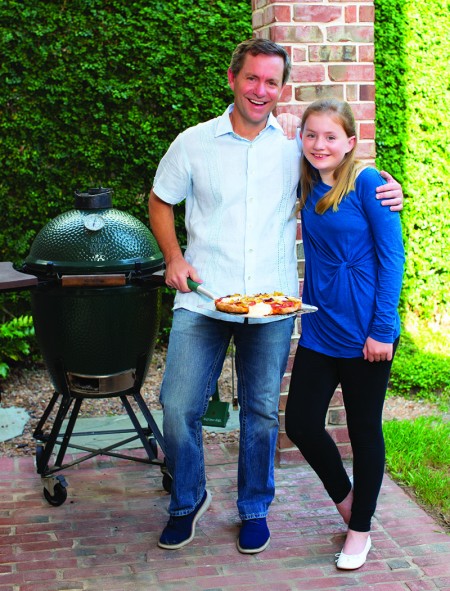 Chip Earle fell into pizza making two and a half years ago when he received a Big Green Egg (an outdoor grill that works as a grill, oven or smoker) on Christmas morning. Although he has always liked to make desserts (crème brûlée and pralines are his specialties) pizza was new territory. “I had never made a pizza before,” says Chip, general counsel of Newpark Resources. “I started in the meat section of the Big Green Egg cookbook and worked my way through.”

Once he mastered the grilled meats, he literally turned the page to pizza recipes and a whole new world opened up. “The Big Green Egg really does lend itself well to being a pizza oven,” says Meg Earle, who gifted the grill to husband Chip. “The first time he made the pizza, we were like ‘Wow! This is really good!’”

And that was a game changer for the couple and their three children, Amelia, 12, Margaret, 11, and Edward, 8, who have dietary restrictions due to food allergies. They keep their home gluten and dairy free. “Amelia was diagnosed with celiac disease when she was 2 years old. We have been gluten free for a long time. A lot of our meals tend to be ‘build your own’ rice bowls, tacos and salads where everyone can pick and choose their own ingredients,” says Meg. “When Chip learned to make the pizzas, it really was nice for Amelia because it is something she cannot normally have. It is nice to have something to cook at home that tastes like a treat.”

Chip says he makes his dough gluten free and that it took a little time to get his recipe down pat. “My recipe is a combination because the Big Green Egg cookbook does not address gluten issues,” he says. “At Central Market, they have Bob’s Red Mill Pizza Crust Mix flour, and I use that as a starting point.” He purchased the pizza stone and pizza peel (a pizza-sized spatula) that work with the grill. “The trickiest part is transferring it from the kitchen to Big Green Egg. It’s more art than science getting it onto the pizza stone.”

“The kids and I will put out different toppings like tomato sauce, mozzarella, basil from the garden, pineapple, pepperoni, artichokes, peppers and mushrooms,” says Meg.

“It’s fun,” says Chip. “The kids love the pizza. Whenever we have a free weekend I will make it, and we get a pizza party.”

“Pizza is the perfect food,” Niko says. “What would you rather eat than pizza? It’s satisfying. It’s beautiful. It’s perfect.”

Place ¼ cup warm water in a small bowl and sprinkle with the yeast. Let sit for 5 minutes or until yeast is hydrated and creamy. (This will allow the yeast to be quickly absorbed by the flour.)

Place flour, salt, yeast mixture and remaining water in mixer bowl fitted with a dough hook. Mix on low speed for 2 minutes to combine. If the dough appears too wet and sticky and is not combining, add flour 1 tablespoon at a time while mixing until dough takes on a “shaggy” appearance. Drizzle with oil and mix for 2 minutes more. Dough should form a smooth ball and clear the sides of the bowl. Turn mixer off, cover top of bowl with plastic wrap, and let rest for 20 minutes. Resume mixing on medium low speed for 3 minutes, or until dough forms a smooth ball, clearing sides of bowl. Place in a lightly oiled bowl and cover with plastic wrap. Let sit at room temperature for 2½ hours. It will double in size. After rising, the dough may be made into dough balls. Yields 4-5 pizzas.

Combine yeast, sugar and water in a small bowl and let stand about 10-15 minutes until liquid becomes frothy. Place full package of Bob’s Red Mill Gluten Free All Purpose Pizza Crust Mix and salt in a separate large bowl and add egg and oil to wet ingredients; then pour in the small bowl with the yeast. Wet your hands with water and knead the resulting dough by hand.

Place 1 cup of all purpose gluten free flour on a cutting board. Use a rolling pin with some flour on it to roll out one of the dough balls into a 10- to 12-inch circle on the cutting board. Cover with favorite sauce and toppings. Sprinkle all purpose gluten free flour on pizza peel, transfer pizza dough with toppings on top to pizza peel, and then gently slide the pizza onto the pizza stone within the pre-heated Big Green Egg. Cook for 10 minutes or until the dough is slightly brown and the cheese is melted and bubbling.

Remove the pizza and repeat steps 6-8 for a second pizza from the second dough ball. Makes 2 large pizzas. 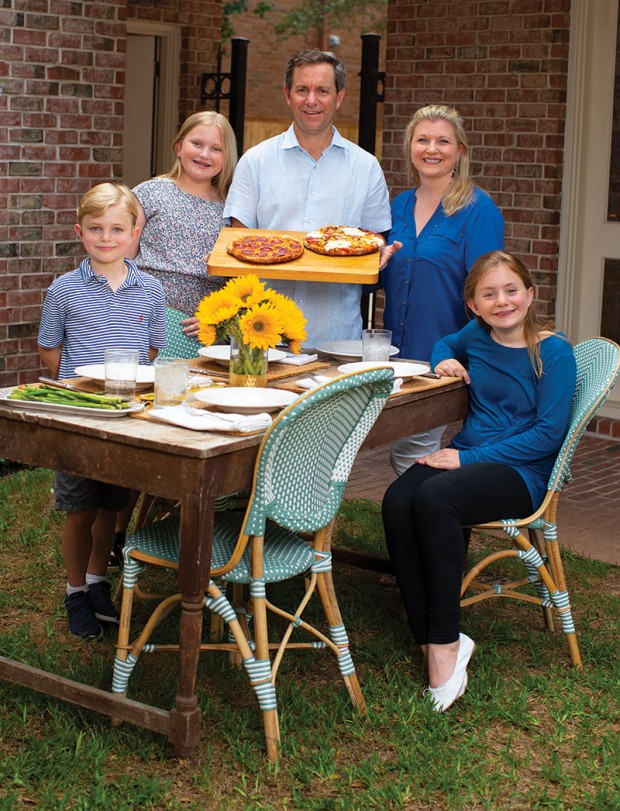 Chip and Meg Earle like to eat homemade pizza with their children, (from left) Edward, Margaret and (seated) Amelia. (Photo: Dylan Aguilar) 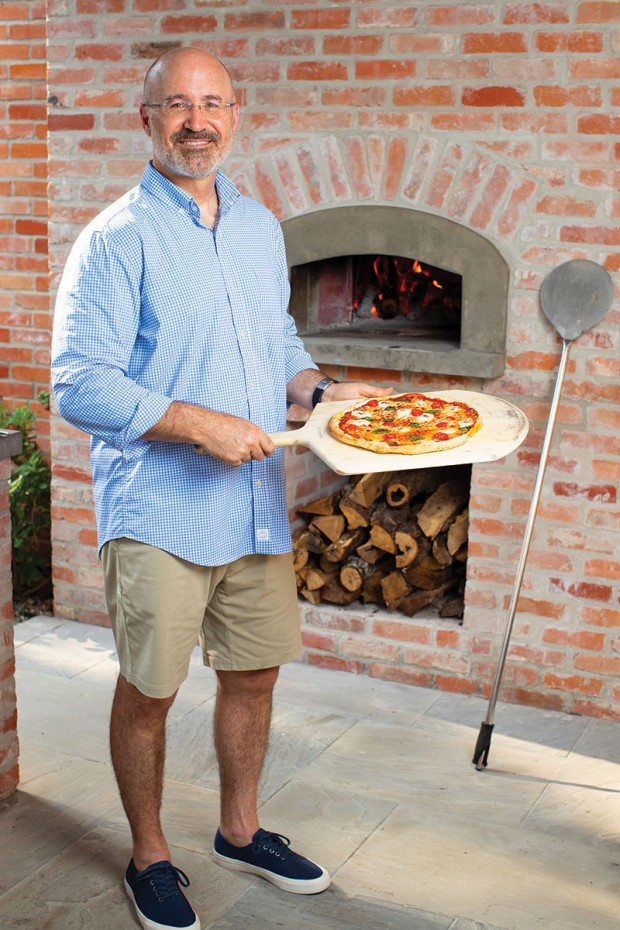 HOT OUT OF THE OVEN Niko Lorenzatos says his pizza oven heats up to 1,000 degrees. A homemade pizza takes just minutes to bake. (Photo: Dylan Aguilar) 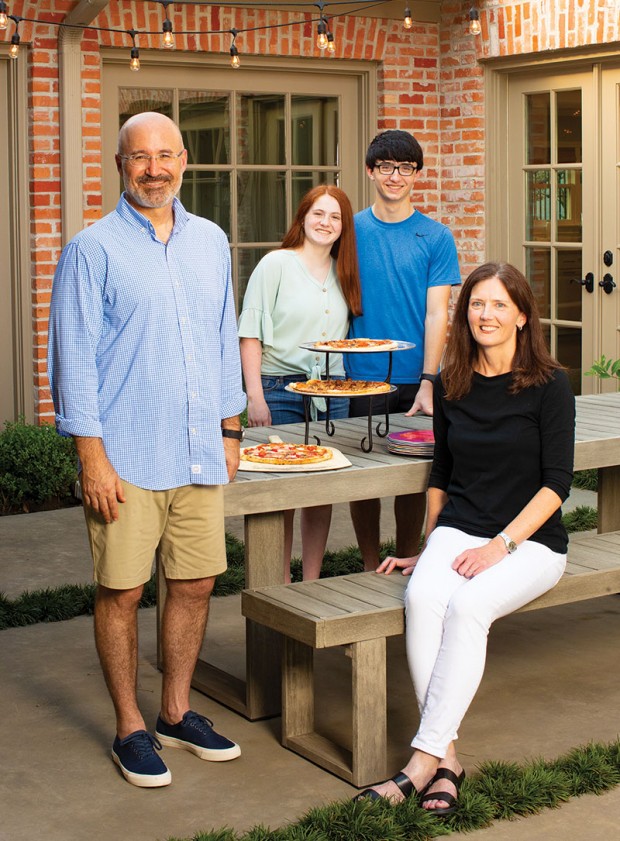 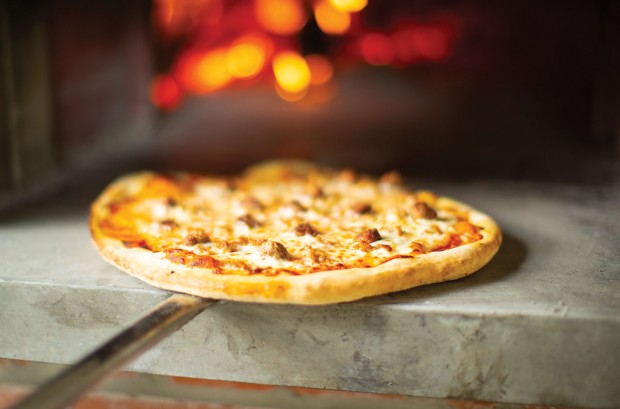 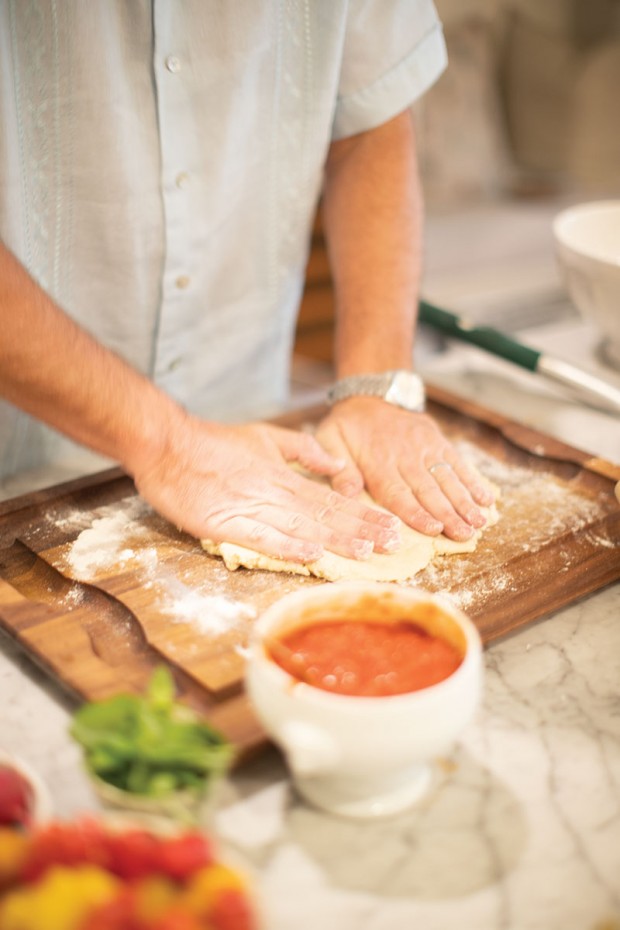 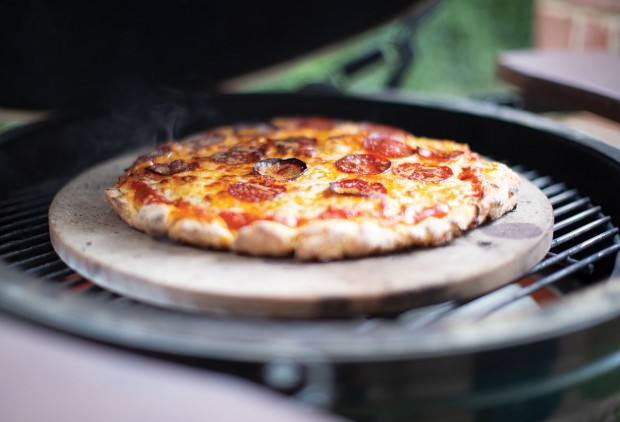