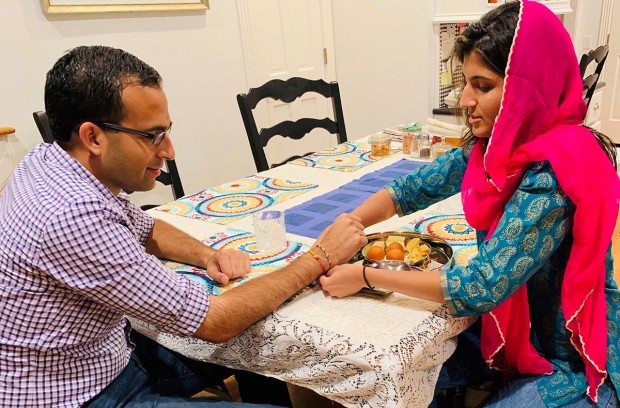 Pooja Salhotra ties a rakhi on her brother, Raj, during Rakhi 2019.

This refrain holds true on a whole different level when it comes to brothers. My brother is my shoulder to cry on, the guy I vent to when I’m frustrated with my parents and the person I most look up to in the world. But on other days, he’s an annoying third parent, an overprotective big brother, or someone who I simply can’t stand to be in the same room with.

This week, as I celebrate the Hindu festival of Rakhi, I’m reminded of the special bond I share with my brother, Raj. At the end of the day, Raj is the only other person on the planet who shares my crazy and overbearing (but incredibly loving) parents. Our shared childhood means he understands me in a way others simply can’t. And even though we have our share of fights and disagreements, it’s an unspoken truth that he’s always got my back  (like when he got me through 9th grade biology, or when he was the cool older brother who didn’t tell my parents about the boy I was secretly seeing).

On Rakhi, which falls on a different date in August each year according to the Hindu lunar calendar, sisters tie an amulet, called a rakhi, on their brothers. Symbolically, the rakhi represents the unbreakable bond between brothers and sisters. And tying it demonstrates a sister’s commitment to unconditionally supporting and protecting her brother. The brother, in return, gives his sister money or a gift to indicate his commitment.

As a child, I always looked forward to rakhi. All I had to do was tie a piece of thread on my brother’s wrist, and I’d get money in return. What’s not to like? Plus, as a creative and crafty kid, I even enjoyed making rakhis myself. The whole holiday seemed like a win-win for me. As I’ve gotten older, though, I’ve come to understand the deeper meaning behind the festival. I still do love Rakhi (and I’m not complaining about receiving gifts), but I now understand that tying rakhi carries with it a responsibility to uphold a sibling relationship, even when times are tough. 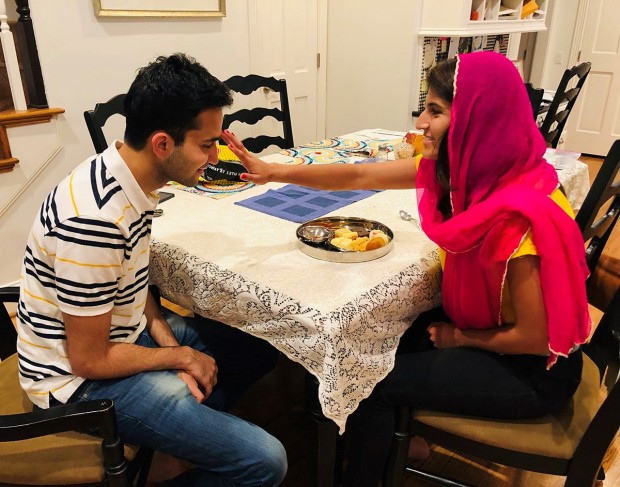 Pooja Salhotra celebrates Rakhi with her older cousin Shivam Salhotra when he visited Houston in August 2019. Here, she’s pictured applying a tilaka on his forehead, which is traditionally worn on special religious occasions.

In Indian tradition, cousins are considered your brothers and sisters. So, in addition to Raj, I have seven first “cousin-brothers” who I celebrate Rakhi with each year. My cousin-brothers are an eclectic bunch, but I somehow get along well with each of them. There’s the cousin who explored NYC restaurants with me when we both lived there after college, the cousin who I send funny snapchats to, the cousin who bought me a beer pong table for my birthday, the ones who I play football with in the backyard every Christmas, the one who I baked a Black Forest cake with and the one who I used to blindfold while he sat in front of the computer trying to work.

Because they all live in different cities, I rarely get to tie rakhi on my cousins. But I usually send it in the mail and ask them to have someone else tie it on my behalf. Sending a rakhi to each of my cousins reminds me of how lucky I am to have grown up with so many brothers. Not many girls can say they have eight boys who they know will always love them.

So, here’s to many more years of tying rhakis (and boys, don’t forget your gifts).