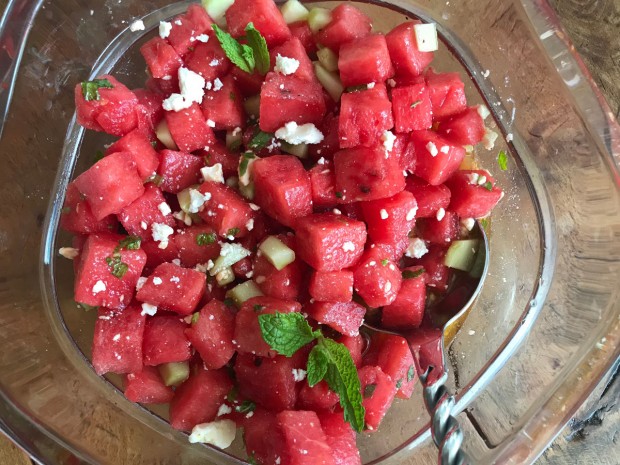 What's better than cold watermelon in the summer? Watermelon Salad with honey, mint, cucumbers and feta.

Watermelon is the perfect summer food. There’s nothing better than a cold, unadorned, smile-shaped slice eaten outside in the sun. Or icy cubes snacked on straight from the fridge. But you can also elevate the sweet fruit into something a little fancier. Let’s remember, though – it’s still summer, so fancy doesn’t mean fussy.

Fancy-but-not-fussy Summer Watermelon Salad is fully worthy of co-starring next to anything grilled at a dinner party. And it’s also so easy that you can throw it together in minutes and have it on the table tonight, fuss-free and oven-free.

I first served a watermelon salad when we were putting together the Junior League cookbook Peace Meals. It quickly became a family favorite, something that got requested over and over again. We have made a few changes over the years, but the basis of the salad remains the same. There’s something about the sweet, juicy, salty, crunchy combination that is perfectly refreshing. Happy summer!

In a small bowl, whisk together the orange juice, honey, chives, vinegar, oil and salt and pepper to taste. In a large bowl, toss together the watermelon, cucumber and dressing. Sprinkle the feta and mint over the top, and serve chilled.