A teen-vocab primer for grownups 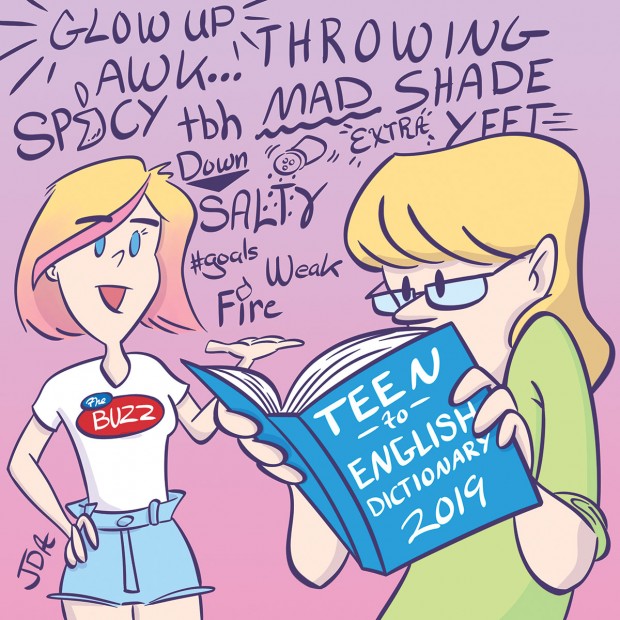 MAKING SENSE Need help translating what the teenagers in your life are talking about? Get ready for a new school year with our vocab primer. (Illustration: behance.net/runamokstudios)

So much of August revolves around prepping for school. Kids are (hopefully) making sure they’ve read their summer-reading books, finishing up math packets and gathering school supplies. They’re getting school clothes and uniforms together, and they’re poking around trying to figure out which friends will be in which classes.

Parents play a role in all of that: We nudge the process along, we try to keep it all organized, and we pay. But how are we getting ourselves ready for school?

Over the summer, there was a lot of talk about “glow-ups” in our house. I had no idea what a glow-up might be until I was informed, after a few head shakes indicating something like, “How can you be so dumb?”, that a glow-up is a person on the way up (of course). Like a boy who has braces now and might be a little awkward but is going to be really cute when the braces come off over the summer. He’s glowing-up.

This conversation wasn’t the only one requiring translation. My mom said something was “hip” and was immediately told that using the word “hip” was very unhip. “So what am I supposed to say?” my mom asked. “Fire,” according to the younger crew.

All this talk made me realize that parents and grandparents – and anyone else wanting a little respect from the younger set – might need a vocab primer. Because we want the school year to be fire, too.

Awk – Short for awkward, which describes anything that is slightly off or uncomfortable.

Big oof – An exclamation used upon making a faux pas; “That test was a big oof.”

Cappin’ – Lying; see no cap below for the antonym.

Clapback – A comeback; if someone threw shade (see below) at you, and you turn around and throw shade back at them, that’s a clapback.

Extra – Over-the-top, as in, “The English poster I spent five hours on is so extra.”

Fire – Descriptor for something really great; “That party was fire.”

Glow-up – When a person goes through a phase of being awk (see above) and comes out looking really good.

Goals – Something you aspire to; my teenage daughter defined this one simply as, “Jennifer Aniston.”

I’m hip (not to be confused with the “hip” that no longer equals cool) – I’m aware; I’m down with that.

Literally, I can’t – When you cannot deal with something; what you say when the test you’ve been studying for all night gets postponed.

No cap – No lie; you are telling the truth.

Salty – Describes someone who is grumpy or mad; “I’m salty that we have a math test the day after Labor Day.”

Shook – When something makes a big impact or is surprising, you’re shook.

Spicy – Sassy; as in, “Your outfit is a little spicy.”

TBH – An acronym for To Be Honest.

Throwing shade – To insult someone without actually saying anything bad; when your teenager comes downstairs and you’re less than happy with their outfit, if you said, “Well look at you…” you would be throwing shade.

Throwing mad shade – Being super insulting, i.e. throwing a whole lot of shade, as in, “Well look at that dress. Bless your heart.”

Weak – This one has a double meaning: It can mean you’ve laughed so hard that you have become weak in the knees, or it can mean that something is displeasing, as in, “Do you want to go to McDonald’s or Whataburger?” “McDonald’s is weak; let’s go to Whataburger.”

Yeet – A sound effect used when throwing something, or to leave, as in, “When do you want to yeet?”

Let’s put it all together so that nobody seems awk by not knowing what the kids are saying. A few helpful starter phrases to memorize:

Do you low key want to go to the movies? I’d be down.

Did you see the new episode of The Bachelorette? There was so much drama, I’m shook. Literally, I can’t.

Janie was so awk last year, but she had a glow-up, and now she’s really spicy.

Wishing everyone a school year that’s fire. Good luck with the lingo.

And expect it to change in, oh, the next five minutes.