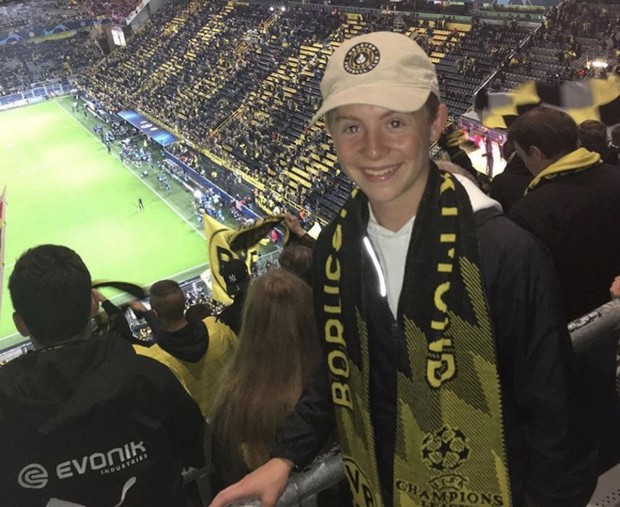 Heger smiles at a soccer game in Dortmund, Germany.

As everyone settled back to their old schedules and resumed school, one student returned to Bellaire High School after a year of studying abroad in Europe.

Eugene Heger, who lived with a host family in Cologne, Germany, talked of his experience abroad. He was the first exchange student to attend the local school, which created some initial hardships.

“The first 2 or 3 months were tough in terms of language. I had only taken German 1 before going to Germany, and I forgot most of it the summer before I left,” Heger said. “But my parents helped me learn, and now, after a year, I am fluent in German.”

Never having returned home for an entire year, Heger spoke of another struggle that he learned to grow from.

“I got really home sick during Christmas-time,” Heger said. “I missed my family and my dog, Lilly.”

Despite these struggles, Heger learned to adapt to his new environment.

“I would have school every day from 8 a.m. to 4 p.m., and on Sundays from 8 a.m. to 1:30 p.m. We had an hour-long lunch period during which we could go into the city and get whatever we wanted to eat. I would have soccer practice after school. I would always eat a doner (a sandwich with chicken or lamb) afterwards. That is one of the things I miss,” Heger said. “Then I would ask my host brothers, Simon and David, how their days were.”

Heger recalls his favorite memory during his year in the European country.

“The week of ‘Karneval (carnival)’ was my favorite. It’s a big German event where everyone dresses up in costumes,” Heger said. “I wore a Captain America bodysuit. It is a whole week where they are out of school and everyone goes out in the streets and sings, and there’s music, parties, and games.”

After a year spent out of the country, Heger returned to his old life.

“I mostly miss the food,” Heger said. “But I’m glad to be back. Everyone that I care about has not changed since I left.”

“I am most excited about playing for the Bellaire soccer team,” Heger said.