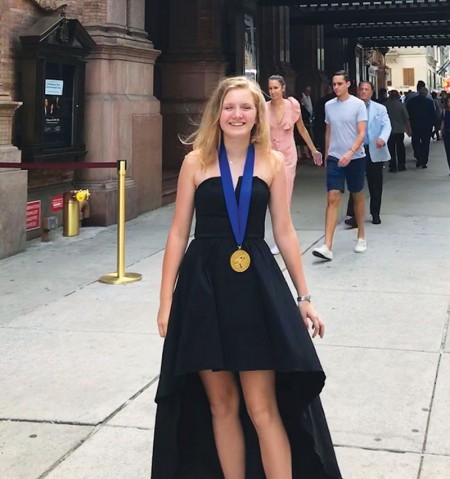 This year, I won a Scholastic national gold medal for a short story I wrote, Our World. The story was about a Native American girl who falls in love with a European explorer who brings a plague to her land and people. For the award, I was invited to go to New York City.

New York was astonishing. At first, I felt like an alien in a different world because it was so different from Houston, Texas. Alas, I caught the “New York Bug,” as my mom likes to say. By the end of the trip, I did not want to go home.

The highlight of my trip was the award ceremony at Carnegie Hall. There was a sense of disbelief around the whole event. People like Stephen King and Andy Warhol had received this award, and I couldn’t fathom that I had as well. I was nervous for some inexplicable reason. Sitting around me were the future artists, writers and poets of America! Just to be involved in that was unfathomable.

Carnegie was beautiful. The building and stage were painted with whites and golds. The place was huge! At six o’clock, people started piling in, and all four or five tiers were filled. The room darkened, and video clips of the young writers and artists played to music from The Greatest Showman.

There was a moment where the announcer asked us all to stand up and turn around. He announced us as the “Future Creators of America.” I remember the lights being so bright as I looked towards my family hearing the words, “This is the greatest show….”

One of the heads of Scholastic came and spoke to us, calling us the “artistic elite.” Tina Fey was the opening speaker. She shared stories from her experience in the arts industry and helpful advice. Other speakers included Rose Byrne and Zac Posen, who was also a past recipient of the award. I thought Tina Fey was by far the funniest.

I had a really great time in New York and hope to go to school there one day.