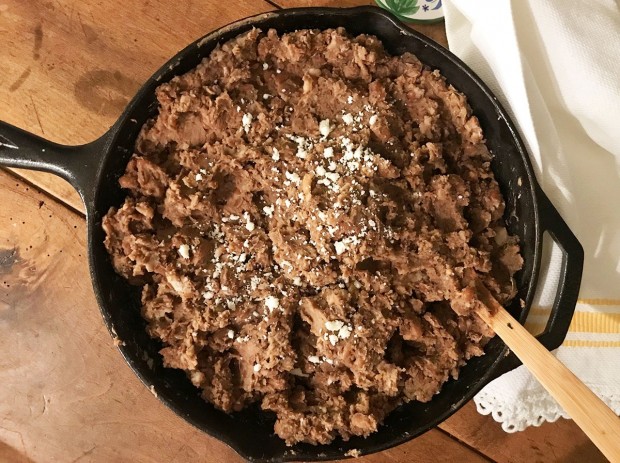 I had planned on talking about chicken chalupas. I had an excellent one in San Antonio recently, and I was hell-bent on recreating it at home. (I’d tried ordering a chicken chalupa at our favorite Mexican restaurant here, and it didn’t hold up to my memory of the SA chicken chalupa. Necessity is the mother of invention, they say.)

The problem was that the chicken chalupa that was so perfect had a layer of refried beans on the bottom. So when I went to recreate the chalupa, I was stumped, because I really don’t like canned refried beans. I know they’re not terrible and for sure they’ll do in a pinch, and I know they’re just a small part of the whole chicken chalupa. But when I get an idea in my head and think I can do better than what’s available, I’ve got to follow through. It can present problems, if you ask my children.

So I started researching recipes and pulled something together, using different parts of different recipes, that I thought might work. I’d never made refried beans, never even bought pinto beans. But I gave it a shot. And it was totally worth the try.

Homemade refried beans are exponentially better than the canned stuff. They taste like what you’d expect to find at a really good Mexican dive: Creamy, a little bit smoky and just salty enough. They were kind of a revelation at our house.

Refried beans take a little time to make, but you’ll probably wind up with enough to freeze. Be sure to freeze them in portions that are just the right size for your family, so that you’ll have several nights’ worth. Once you try homemade refried beans, I’ll bet you won’t go back to the can aisle for refried beans ever again.

Next up: Chicken Chalupas.

Put the dried beans, onion, bell pepper, garlic and salt in a large stockpot. Add enough water to cover everything by about an inch. Bring the beans to a boil, then lower the heat to a simmer and cook for about two hours or until the beans are soft. Check periodically; if the water gets lower than the top of the beans, add more.

Meanwhile, cook the bacon in a large cast-iron skillet or another large, heavy skillet. Remove the bacon from the skillet and reserve it for another use. (Or, if your home is like ours, put it on the counter and watch it disappear. Or, crumble it up and sprinkle it on top of the beans when they’re done cooking.) Keep the bacon fat in the skillet.

When the beans are soft, drain them in a colander set over a large bowl to reserve the cooking liquid. Remove and discard the onion and bell pepper.

Add the vegetable oil to the skillet with the bacon fat, and heat to medium. Add the drained beans, then add the cooking liquid, about ½ cup at a time. Cook the beans on medium heat, mashing and stirring them with a wooden spoon continuously until the beans soak up the liquid, then adding more liquid. Be sure to scrape the bottom of the pan as you mash and stir.

When the liquid has been absorbed, continue cooking until the beans are thick, about 8 minutes, continually stirring and scraping the bottom of the pan. Mash any whole beans that are left with a potato masher or the back of a fork. (If you want super-smooth refried beans, you can puree them with an immersion blender.) Season with salt to taste. Beans can be frozen in airtight containers. When you reheat, you may need to stir in a little water to moisten them back up.

If you’d like, top the beans with crumbled cotija cheese, crumbled bacon, and/or chopped cilantro.