“The best day of my life” 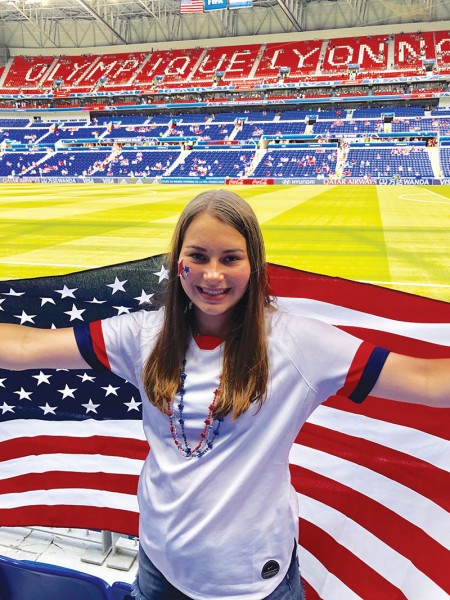 BIG FAN Thanks to a family trip and a ticket contest, Grace Vallone got to watch the U.S. women’s soccer team win the World Cup in France.

We love getting calls from neighbors sharing fun stories about other neighbors. And that’s what happened when Jo Helland, a retired Kinkaid English teacher, called to let us know that her friend and neighbor, Grace Vallone, recently had an “incredible experience” in Paris.

Grace, a rising sophomore at The Kinkaid School, has played soccer since she was 5 and is a big fan of the U.S. women’s national soccer team. She’s such a fan that, last year, she wrote a school paper on why women soccer players should receive equal pay (men reportedly get paid some 30 times more than women in the sport).

“I’ve been following the player Alex Morgan, and she’s been leading a lawsuit [for equal pay],” Grace says. “I learned about it through social media, and for school we had to write a research paper on a modern conflict. The teacher gave us a list of topics, but I chose my own.”

Grace’s maternal grandmother, Ann Paulus, had, for years, wanted to take her to Paris, along with Grace’s parents, Carrie and John Vallone, and her 12-year-old brother Luca. Grace asked if the family could plan their trip around the FIFA Women’s World Cup, so she could attend a game. Little did she know then that the U.S. women would win the cup! 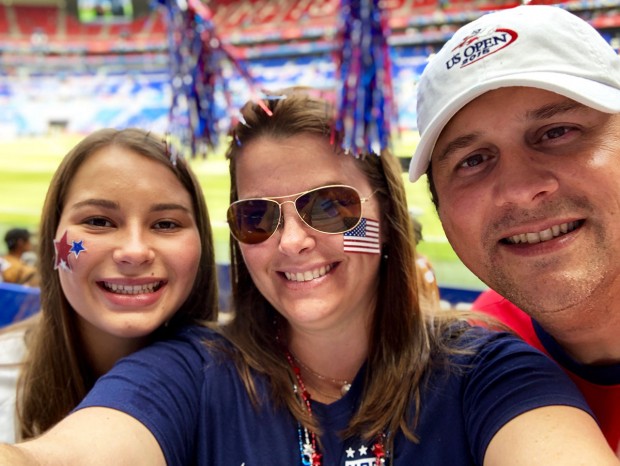 But the story gets better.

“We got train tickets for John, Grace and me to go down to Lyon to see the final game,” Carrie says – Luca and his grandmother Ann would stay in Paris for the day. “We got some nosebleed seats, and we had no idea if we’d see the U.S. play, but we just wanted to go, whoever played.

“When we were in Paris, a week before Luca and John got there, because Luca was at camp, Grace, my mother and I went to watch the semifinals outside where FIFA had a viewing spot. They also had erected a Women’s World Cup museum next to the fan zone. Grace was giddy!”

At the museum, Grace entered a contest on a whim to win FIFA tickets to the finals. “You entered by taking a picture in the tent and tagging the FIFA museum and their sponsor Hyundai on social media,” Carrie says. “Grace and I both posted and forgot about it. Until she came to me three days later saying, ‘Mom, I think I won.’

“I was like, ‘What just happened?’ She’s looking at me, and I’m reading the fine print, not believing it. But there wasn’t anything shady looking.” 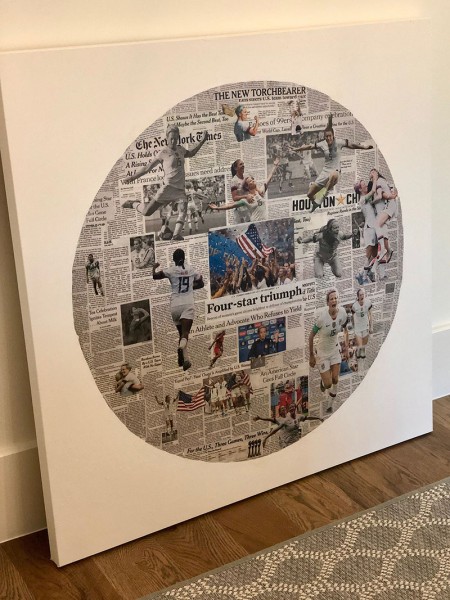 Carrie Vallone took news clips that her neighbor Jo Helland had saved for her and made a collage for her room.

Grace responded to the email, which said it entitled her to two tickets to the final game. She asked if it would be possible to know the location of the seats, so they could buy another one, making a total of three tickets. FIFA said they were second-row seats, and gave them an extra ticket. “So we went from the nosebleed section to the second row for the three of us,” Carrie says. John sold the original tickets online. “It took all of 20 minutes to sell them,” Carrie says. “We held our breath all the way to the game because you never know. But the tickets were legit.”

Grace dressed up in a giant American flag with red, white and blue glitter stickers on her face. “It was amazing,” says Carrie, “because there’s this current issue that Grace had really been interested in, about how to grow women’s soccer and get equal pay, and then we go over there, and she gets a second-row seat at the game and sees them win! Her passion collided with winning tickets and the World Cup, and she got to see it all in real life. The way it all came together was magical.”

Grace, who plays center forward, says, “It was literally the best day of my life. We could see the players’ families and parents in our section.”

The family noticed a discrepancy in levels of enthusiasm for men’s soccer vs. women’s. “It was very eye-opening to see in real life,” Grace says. “My grandmother talked to a man and asked if he was watching the women’s World Cup. He said, ‘I only watch men.’ It’s interesting to see that in another country.”

Carrie adds, “What the U.S. women’s national team is doing for little girls, stepping into these really strong role model positions and bringing the issue of women’s soccer and equality to light – I’m loving seeing them empowering girls while [the team is] at their top. It’s only the beginning.”

Back at home, Jo Helland, Grace’s neighbor, had been meticulously cutting out newspaper stories in the months leading up to the World Cup, and giving them to Grace. When she came home, Grace made a giant canvas collage for her room with all of the clippings – a special reminder of her special neighbor and a once-in-a-lifetime experience.