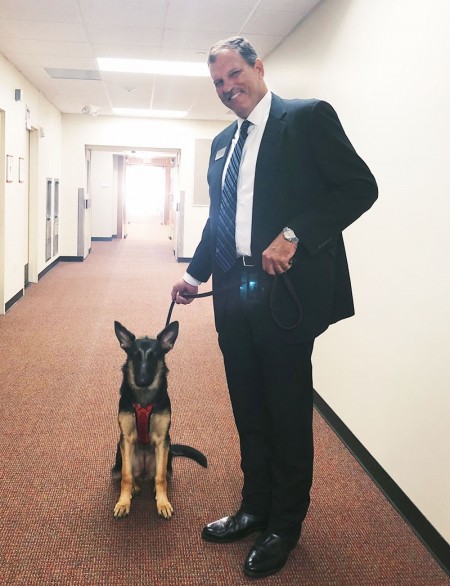 St. John’s is welcoming its first ever security dog this school year. Sheba, a 6-month-old German Shepherd, has been roaming the campus with owner and Director of Safety and Facilities Richard Still.

“The headmaster brought [the idea of having a security dog] up last year, so I did some research and some school districts are choosing to have dogs on campus. There is no doubt that it is a huge factor in safety,” Still said.

Still, who had been wanting a new dog for some time, was having trouble choosing between a German Shepherd and a Malinois. His family surprised him with Sheba, a very animated and vocal female German Shepherd, for Father’s Day this past June.

Still believes that all of Sheba’s training should take place on the school campus. With no students around this summer, Sheba was able to freely explore St. John’s and become more familiar with the lay of the land.

“We did a lot of training with her on campus this summer. All of the training involves me, but every trainer that’s had anything to do with her just remarks on how exceptionally smart she is,” Still said.

Sheba’s training is relatively light right now, but as she ages her training will gradually become much more intense. A typical day of training for Still consists of venturing somewhere quiet on campus, while students are at lunch, to work on Sheba’s verbal commands and her sensory details. After that, Still takes Sheba to Caven Field for a little playtime with a soccer ball. Because Sheba is essentially a kindergartener, she has a short attention span and can get burned out easily, so Still can’t keep her out in the Houston heat for long periods of time.

Even though Sheba is very young, she already knows a number of commands, according to Still.

“Sheba has 280 million sensory nerves in her nose, so she is able to identify people who have been smoking,” he said. “She knows her left from her right, she can sit, stay and heel. If I say ‘the office’ she can lead me back to [my] office, and if I say ‘friend’ she will know that the person approaching her is not harmful.”

Still added that even though it may be slightly different having a dog on campus, students should go about their normal routines and not distract Sheba, because she is always on duty.

“One of the German Shepherd traits is that they are very, very loyal,” Still said. “If there is someone on campus who is here to do harm, she will protect us.”