Out with the Old, In with the New at STE 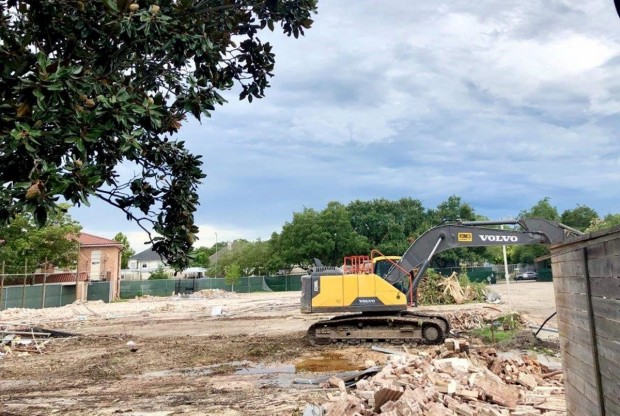 This school year will be like no other at Saint Thomas’ Episcopal School (STE). The demolition of STE’s lower and middle school buildings marked an exciting start to the new school year for many students, their families, and faculty. Although some feel bittersweet about the memories made in the now demolished buildings, the STE family is excited about the construction of a new three-story academic building. Since many of the buildings on STE’s campus were flooded by Hurricane Harvey, the school community has shown great resilience and is excited to begin a thrilling new journey. Students can’t wait to walk through the halls of the new academic building.

Allison Plaza, an upper school Latin teacher and alumna of STE, was devastated to see her old classrooms wrecked by Harvey, but is now looking forward to the new construction on campus. Mrs. Plaza has many memories in the now demolished classrooms where she spent her lower and middle school years. Shortly after Harvey, Mrs. Plaza, like many other faculty and students, came to the school to help clean up the campus.

Referencing the plans for campus building and expansion, Mrs. Plaza explains, “I think the whole situation is a testament to God’s providence. I’m not saying the flood was a good thing, per se, but God has turned it around for good.” Mrs. Plaza is thankful for her colleagues in the lower and middle school who have been incredibly flexible in moving to “Scotland Yard,” the temporary campus where the lower and middle school classes currently reside. She is excited about STE’s future and believes construction will only further strengthen an already amazing school community.

Director of Advancement, Vernon King, also an alumnus of STE, attended classes in every building impacted by Harvey when he was a student. Mr. King recalled, “I can remember cleaning erasers on the metal rail located at the end of the A and B hallway, attending both kindergarten and high school classes in the C and D buildings, and in the E building I recall one of my friends bringing the Houston Chronicle to school to share the news of John Lennon’s assassination.” Mr. King was most sad about the E building being torn down because he made lasting friendships there, many of which he still maintains today.

One memory that many STE alumni can relate to are the old milk rooms, which a local dairy producer supplied with cartons of plain milk, chocolate milk, and orange drink. A drink monitor was chosen in each lower school classroom to take drink orders and collect the drinks in a child-sized shopping cart. Some of the benefits of being a drink monitor were getting to miss a little bit of class and becoming the hero of the day passing out drinks to your classmates. Mr. King believes the buildings served their purpose well, but he is looking forward to an exciting new chapter for the STE campus.

On the horizon, St. Thomas’ Episcopal’s next steps are to finish removing old concrete foundations, finalize paperwork and break ground for the new construction. When the ground is broken, and the new construction starts, it will be a tangible, visual reminder of how God has provided for the school. It is an exciting time to be a student at STE!

9:00 am to 10:00 am
Location:
Evelyn's Park Conservancy
END_OF_DOCUMENT_TOKEN_TO_BE_REPLACED