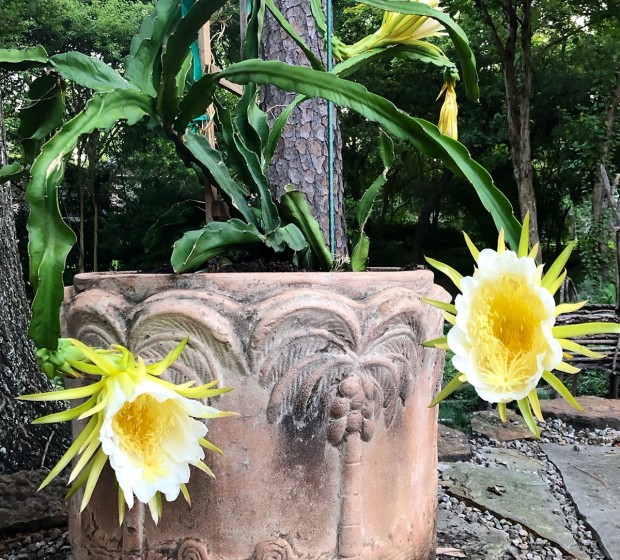 The Dragon Fruit plant blooms only once a year, overnight. Twelve hours later, the flowers shrivel and die.

Last week, Jill Oliver sat outside in her garden just as the sun was coming up. She wasn’t gardening, even though you can often find her tending tomatoes or okra or cucumbers, or even Kujari melons: “They look like mini pumpkins but taste like a very sweet cantaloupe,” she says.

On that morning, Jill was in her garden only to observe, and to enjoy the sight – and the smell – of her first Dragon Fruit blossoms. They had bloomed overnight and would only be around 12 hours before they shriveled up and died, giving way to the growing oblong-shaped, spiky fruit.

Jill, a mother of three and former speech language pathologist, has become something of a gardener extraordinaire. Be sure to look for a full story on her garden in the November issue of The Buzz. As a sneak peek, let’s talk about her Dragon Fruit.

“I happen to really love cacti,” Jill says. “I have my own collection. And Dragon Fruit goes really well with what I already had going. I saw one for sale at Buchanan’s; at the time it was smaller and didn’t have any blooms. So I said, ‘Let’s make a go of this and see what happens.’ I buried it in a huge pot, and started noticing it was getting pinecone-looking shapes that were big and yellow, and I thought, ‘This thing is about to bloom.’ And sure enough it did!”

Jill says Houston is the ideal clime for growing Dragon Fruit: “It’s a tropical plant that loves these warm temperatures.”

Jill Oliver hand-pollinates her Dragon Fruit plant, shaking one of this year's four blossoms to encourage pollen to loosen and float to the flower's anthers.

And the once-a-year, 12-hour blossoms? “They are huge, the size of my face big,” Jill says. “And I got four of them and they only last 12 hours! I took literally millions of pictures because I knew I’d have to wait another 365 days to see them again.”

The short-lived blossoms aren’t something to pick and put in a vase. “I just enjoyed them on my patio, because you would never want to pick them,” Jill says. “I smelled them and shook them and took pictures. They are so fragrant, like a ‘suntan in a can’ flower. Like a rose on steroids and add a little coconut.” 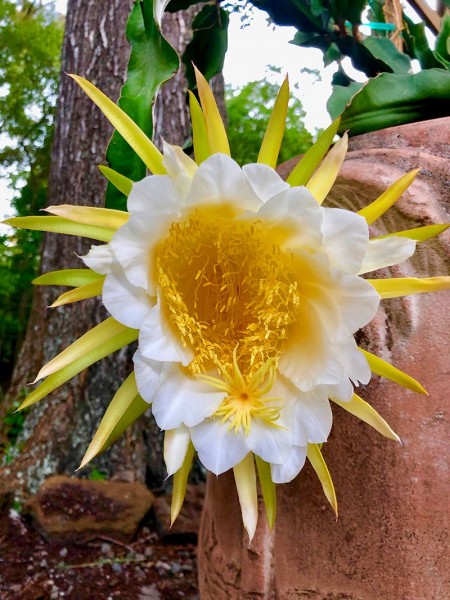 Dragon Fruit flowers are "as big as your face."

Jill shook the flowers in hopes that tiny specks of pollen would drop into the flowers’ stigma to pollinate them to produce fruit. “Just like the birds and the bees,” she says. “There’s nature’s way of doing it too. That’s why the wind blows. But because I’m studying it, I wanted to be sure they got a lot of pollen in there.”

The blooms, which can be white or red, give way to the fruit, which Jill describes as, “about the size of a small orange, more egg-shaped but bigger than an egg, with these spikes that come off of them. Slice them down the center, and they’re white with black speckles on the inside. How fantastic is that?” She’s hoping to harvest four Dragon Fruits from the four blossoms.

“With all the stress in life,” Jill says, “it’s a joy to go out there and tend to these plants and focus for a moment in time on something other than the groceries, the dishes, trying to get accepted to college. It’s a mini vacation!”