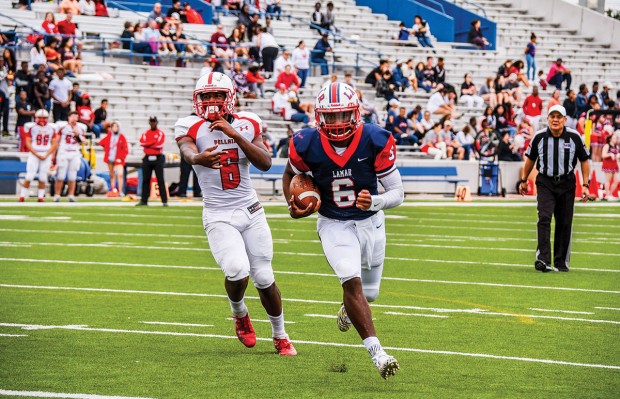 “I definitely feel a lot better going into this second season, and our players are certainly more comfortable with the system,” said Lindsey, who replaced legendary Lamar coach Tom Nolen just before the start of last season. “The kids have an awareness of what we expect from them day in and day out, and that’s been the most positive thing so far for this team.”

The Texans entered the season having won a remarkable 61 consecutive games against district opponents, and leading the way in quest of keeping that streak intact is returning quarterback Troy Tisdale. The district’s offensive MVP, Tisdale rushed for over 1,000 yards while passing for over 1,500 yards last season. “I think by the time this season is done with, Troy will be the marquee type of player Lamar has grown accustomed to producing over the years. He’s a tremendous dual-threat quarterback, and the sky’s the limit for him,” said Lindsey. “We have a lot more experience as a whole than last year, and I’m pretty excited about the season ahead.” 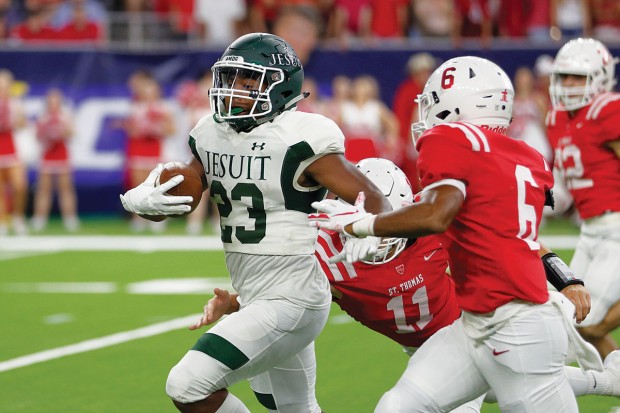 TOP RUSHER The Strake Jesuit Crusaders offense is led by senior all-district running back Dylan Campbell.  Campbell is coming off of a season in which he rushed for over 1,300 yards. (Photo: Wayne Donnelly)

It's also season two of the Klay Kubiak coaching era at Strake Jesuit, and if season one is any indication, there should be plenty of more great things ahead for the Crusaders football program. The Crusaders are coming off a season in which they posted a lofty 10-2 record, including victories over powerhouse Class 6A programs such as Pearland Dawson, George Ranch, Beaumont Westbrook and others. Strake’s season ended in the second round of the playoffs in a rematch against a Beaumont Westbrook team that ultimately advanced to the Class 6A state championship final.

“We may not have the numbers of the larger Class 6A programs we play each week, but our coaching staff does a great job of getting our players prepared,” said Kubiak. “Our players are smart, love the game, and are dedicated to the program. Plus, we have great support from our school administration and community. It all adds up building the right type of culture for our program.”

As for this year’s team, Kubiak welcomes the return of all-district running back Dylan Campbell, who rushed for over 1,300 yards last season, as well as three-year starting offensive lineman Barclay Briggs. Defensively, the Crusaders are led by safety Denzel Blackwell, who has committed to play college football at Boston College, as well all-district linebacker Christian Gordon and returning defensive end Grant Perry. 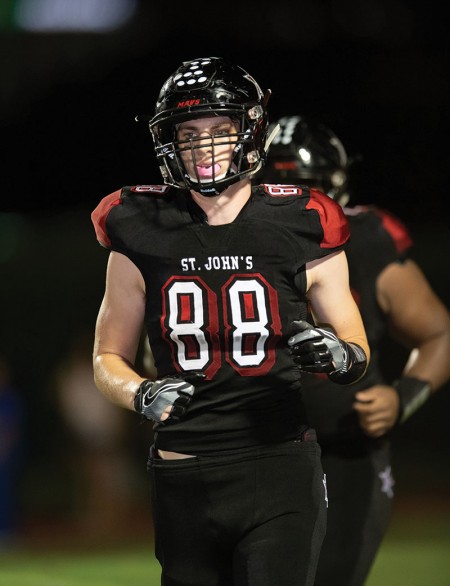 WILL POWER Tight end Will Leger is expected to be an offensive force for the St. John’s Mavericks this season. The senior standout is being recruited by several high-level collegiate football programs.

Veltri comes to St. John’s after spending the last five years as the offensive coordinator for the rival Kinkaid Falcons. “I’m beyond excited,” said Veltri. “St. John’s kind of reminds me of my schooling growing up in Kansas. This being a K-through-12th-grade school offers a unique opportunity to be around players from the time they are 6 years old until they graduate high school.”

At The Kinkaid School, Veltri guided an offensive attack that dominated St. John’s over the last several years, so he now faces the challenge of returning the favor while turning around a program that’s struggled in recent seasons. “I told our players when I took this job our goal wasn’t to finish third in the SPC, but the first and foremost goal is to win championships.” To reach those goals, Veltri believes it isn’t only about Xs and Os on the football field. “We have to make football the exciting thing to be a part of here on campus. We need to bring up the participation numbers at all levels, and we’re off to a good start with more kids turning out this year. So that’s a good sign.”

A good sign on the playing field itself includes the return of several key players led by senior tight end Will Leger. “Will is being recruited by several Division 1 schools, and he’ll be a big part of our offense.”  Other top returnees include senior wide receiver and defensive back Will Skinner as well as senior linebacker and four-year starter Miller Humphreys.

9:45 am to 11:00 am
Location:
Starts at Memorial High Field House
END_OF_DOCUMENT_TOKEN_TO_BE_REPLACED